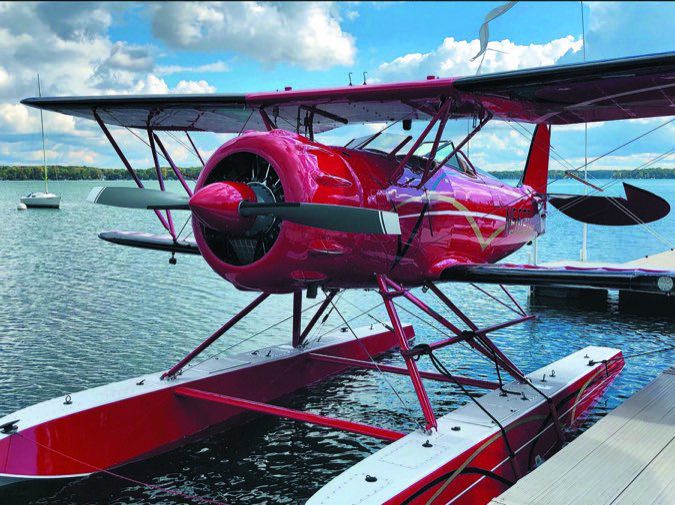 The phrase “irresistible urge” is as good as any to describe why some airplanes get fitted with floats. A Super Cub and a 185, sure. But a DC-3 and a Cherokee 140? And now a giant Waco biplane in the form of the company’s just-introduced YMF-5F floatplane, with the “F” signifying floats.

Can this thing be described as anything other than an esoteric, expensive lark? Well, no. But then you could say the same about a $300,000 light sport with a glass panel. In the rarified slice of the airplane market where the toys live, “want” has always been more important than “need.”

The 5F exists for the simple reason that Waco CEO Peter Bowers got his float rating a couple of years ago and decided it would be really fun to put a Waco on floats. And it is, as long as you don’t get your pants snagged on practicality. In its Battle Creek, Michigan, shops, Waco builds a modernized version of the YMF-series biplanes that first appeared during the 1930s. The company has been in and out of existence, but in 1986, it came back into being and has revised the airframe to modern standards while retaining the basic biplane idea.

The float model is based on the YMF-5D and the model I flew was actually reclaimed from a wrecked 5D. The airplane retains the same 300-HP Jacobs R-7555A2 radial swinging either a fixed-pitch wooden prop or a constant-speed wood/composite model, both provided by MT. The engines are sorta new, but not really. They’re built up from original data plates with new manufacture parts. Technically, they’re overhauls built with new PMA parts.

The airframe itself is constructed just as Wacos always have been: welded chromoly tubing covered in fabric, but with metal panels at select points where wear or puncture resistance is needed. The airframe innards are protected by modern corrosion proofing. The Aerocet 3400 floats are a complete package customized for the Waco. That includes the floats themselves, amphibious main and castering wheels and retractable water rudders. Wheel retraction is handled by an electrohydraulic system that sucks the wheels into cavities in the floats.

A series of confirming lights show the position of both the castering and the main wheels. The mains have oleo shocks so even though they’re a couple of yards away from the pilot’s head and a challenge to touch on the runway delicately, they soak up the bumps nicely. The system has an audible gear nanny. It doesn’t know if it’s over land or water, but it will audibly pester you until you confirm with a button choice that you know what you’re about to land on.

Water rudder retraction is handled via a spring-loaded cable next to the pilot’s left knee. The rudder is retracted for landing and during the takeoff roll.

A begoggled pilot of the 1930s would see the cockpit of the modern Waco as alien technology. There was no resistance to the urge to equip with glass because that’s what people want. The basic panel has the Garmin G5, a GTX 345 transponder for ADS-B In and Out and a digital navcomm and engine monitor. The 5F’s land-dwelling cousin can be IFR certified, but not the float model. It’s day and night VFR only.

The floats are equipped with cavernous compartments for storing things like anchors, paddles, lines and all the various nautical paraphernalia floatplanes must have. There’s also a pump to de-water the bilges for although they’re made of impervious fiberglass, water finds its way in. Shipping water is not to be taken lightly because it adds weight and if there’s an undetected puncture, the airplane can very well founder at the dock.

Speaking of docks, how do you do that with an airplane that’s both a high and a low wing? It’s a piece of cake with a Cub or 185, whose wings will clear about any dock or float. Waco thought of that by building some nice handles into the lower wingtips, but you’re not going to dock this thing into a wharf with four-foot pilings. Only low-profile floats and quays, please.

This Thing is Big

Because of its size, the land-based YMF-5D is daunting. It ain’t no Cub-type taildragger. Because of the floats, the 5F is even more so. It’s a long, high climb into the cockpit and once there, the view is of struts and flying wires and very little else. Surprisingly, the 5F is both docile and delightfully easy to handle. Peter Bowers described it as a giant shopping cart during taxi and that’s about right. In fact, I’ve used shopping carts that don’t handle as well.

While you can’t see immediately under the airplane, you can see well enough to avoid any obstacles and the airplane tracks more precisely than any taildragger and perhaps better than many tri-gear airplanes.

The rear cockpit is spacious to the point of almost being too wide.

With feet on the rudders, you feel fairly spread out. The cockpit is superbly detailed, especially the throttle quadrant, a faithful duplication of the 1930s version, but updated. The power pack for the landing gear is immediately under the panel, between the pilot’s legs. It’s backed up by a hand pump to lower the gear manually. Trim is handled by a 1930s-style automobile window crank. The front hole is even larger than the rear and will easily accommodate two people side by side if they aren’t too wide. There’s a small hinged door to make ingress and egress less awkward.

For its size, the 5F is fair to middling on payload. On a gross weight of 3218 pounds, the useful load is 718 pounds. With 46 gallons of gas aboard, that’s 442 pounds for people and stuff, so in practical terms, this is a two-place airplane if you want to fly very far.

But would you? Maybe for seasonal movements for fishing in the summer lake district, but at 100 MPH typical cruise, you won’t be getting there very fast. Behind the rear cockpit is a big baggage compartment with a lock, so with the weight in the sweet spot, you could certainly travel in the airplane. By the way, to accommodate the floats—400 pounds total—Waco bumped up the gross over the land version.

While it’s popular to transition some floatplanes from floats back to wheels, that’s a little involved with the 5F. Bowers says it takes about a day and half. The only reason I can think to do that is for hangar accommodation. The airplane is just too high on floats to get into a standard T-hangar and I doubt you’d want to let an airplane this expensive live long term soaking in a lake or baking in the sun tied down on a ramp. I suspect if it stays on floats, the 5F would find a home in a group hangar.

If the YMF-5F’s stated purpose is flying for fun, it nails the design brief, especially if you define fun as attracting a lot of attention on the ramp. A bright red airplane 12 feet tall is hard to miss. While Peter Bowers gave me some general target airspeeds, the Waco can be flown entirely on the wing. It telegraphs when it’s ready to fly on the takeoff and when it’s about to quit in the air.

With the floats, the stall is mushy but not as abrupt as I expected. Those wings produce a lot of lift. But in a full-up glide, the airplane is a brick and in an engine-out event, it’s going to land not too far from where the power gives out. It does have adverse yaw, as most 1930s designs do, but it doesn’t require much rudder in normal turns at cruise speeds. Control forces are lower than I would have expected for an airplane of this size and trim stability is surprisingly good.

I noticed this when we were enroute to a lake about 10 miles from the departure at Tampa’s Peter O. Knight. Trimmed for level flight, the airplane hardly deviates in pitch or roll, obviating the need for an autopilot on a long cross country. It behaves exactly the same way on approach. Trimmed for 75 MPH, it flies on rails to the trimmed airspeed.

With 300 HP, the 5F doesn’t leap off the water, but it’s no slouch. I timed a couple of runs at 15 seconds and noted that the cockpits are high enough not to feel so much as a drop of spray.

I was nervous about landing because with all those struts and wires, the visual cues are minimal, plus the height above the floats makes judging any flare a challenge. It has to be done by feel. That turns out to be relatively easy by using the glassy water technique of pitching the nose up slightly—the cues are good for that—setting the power and just letting the airplane settle on the water. A little back pressure keeps the float tips from digging in, but the Aerocets have sufficient buoyancy to discourage that anyway.

You can use a version of the same technique on a paved runway with good results. With four wheeled contact points, there’s little risk of a ground loop. Even the taildragger version of the Waco, which I flew a few years ago, is relatively docile as tailwheel airplanes go.

Yes, a biplane on floats is as wildly impractical as it is fun. At a $595,000 base price, the YMF-5F is a niche airplane within a niche and not likely to sell more than a handful a year. It would be the second airplane for someone with the wherewithal to afford…whatever.

But if attracting attention on the ramp or the river is your thing, the Waco will get more eyeball time than anything I can imagine short of a Martin Mars. And at least you’ll be able to afford the fuel bill.

Click here to see a video review of the Waco!