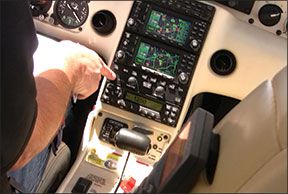 Proposals for new autopilot upgrades can be shocking. Even entry-level wing-leveling systems start at $10,000, not including installation. But that won’t buy much. Higher-end models with add-on options can easily snowball a project to $40,000. That’s roughly the cost of an average engine replacement—or an average Skyhawk.

For years, S-Tec (now Cobham Avionics) has dominated the autopilot retrofit market with thousands of STC approvals, from Cessna 150s to Beech 1900s. But S-Tec isn’t the only game in town.

Stability Matters
Since pilots buy autopilots to fly the aircraft more smoothly and with more accuracy than a human, it’s easy to have unrealistic expectations on what a modern system can do and how well it might perform.

Rather than an automatic pilot, the better description is flight control system. That’s because what we’re really asking the system to do is maintain aircraft stability, particularly when turbulence and out-of-trim conditions depart the airframe from the intended roll-and-pitch axis.

In addition, we expect full-featured systems to precisely fly all segments of an instrument approach, including course reversals and holding patterns, following the lead of integrated GPS navigators and FMS systems.
Attitude-based systems do all of that more precisely than a rate-based system. It’s all about the precision and stability of the reference source that feeds the autopilot computer. An attitude-based autopilot computer receives roll and pitch signals from a compatible attitude gyro (or digital AHRS, in a PFD-equipped aircraft). A rate-based autopilot works by reference from a rate gyro inside an electric turn coordinator, arguably a less stable reference, especially in turbulence as the turn coordinator bounces.

As we reported in the instrument upkeep article in the January 2013 issue of Aviation Consumer, PFD systems equipped with non-spinning, electronic gyros have become the preferred sources for driving autopilots. They’re more precise, reliable and promise a longer life. You’ll still need a backup attitude gyro, but it doesn’t need to have the outputs for driving the autopilot. The AHRS does that when connected to a digital gyro emulator/converter (Garmin’s GAD43 or Aspen’s EA100).

Once the leader of the autopilot market, Bendix King introduced the KFC225 for new production Beech Bonanzas and Barons. The all-digital, attitude-based KFC225 was intended as a modern replacement for the venerable KFC200/150. Bendix King made significant improvements when designing the KFC225, eliminating the heavy KC295 remote flight guidance computer in favor of a flat-pack, self-contained computer/controller that mounts in the radio stack. It reengineered the KS270-series mechanical servo actuators to an improved servo speed control, or tach feedback, design. Plus, it added an integrated altitude preselect and vertical speed function, eliminating the remote KAS270 altitude selector system. There’s also voice prompting and an optional yaw damper that still requires a separate yaw rate gyro.

The KFC225 went out of production during Bendix King’s hiatus from the market, but it’s back in the lineup with an interface that’s based around Garmin’s G500/600 and Aspen’s Evolution PFD. When the KFC225 was introduced, the STC included the KCS55A mechanical HSI system and the KI256 flight director gyro. Now, the installation approval is blanketed under Garmin and Aspen STCs. But that doesn’t make the KFC225 a player in all aircraft, although Bendix King says the STC list is expected to grow. For now, it’s available for the Beech Baron and Bonanza series, Cessna 421 and 414, Piper Navajo Chieftain and the newer GippsAero G8. Bendix King says the system will be approved for the Cessna 210 series and the Piper PA46 Malibu Mirage in mid 2014.

Pricing for the KFC225 starts at $28,000, but that doesn’t include an Aspen or Garmin PFD or a gyro emulator. Aspen’s single-screen Evolution PFD is roughly $15,000 installed, while a G500 might easily top $20,000. You could install the system with the KI256 flight director gyro, priced at $20,000, and the KCS55A slaved compass system with HSI for $17,000, but we can’t see why anyone would do that. If you have an existing KFC200, a KFC225 could be an easier retrofit than starting from scratch, since some of the existing servo mounts and other supporting hardware might be utilized.

Century
Forget the rumors that Century isn’t making autopilots any more. There are four current-production models in the Century lineup and all are compatible with Aspen’s EA100 autopilot gyro emulator (it can also replace the 52D-series attitude gyro in vintage CII, III and IV autopilots).
Century’s Alan Flewitt says the company holds more autopilot STCs (over 1600 approvals) than any other autopilot manufacturer. It also offers field and factory support for vintage systems from its headquarters in Mineral Wells, Texas.

The expandable C2000 autopilot remains the company’s top selling system, available in a basic single axis or up to a three-axis configuration that Century calls the “Total Solution” model. It has roll, pitch, flight director and yaw damper.

In the basic roll configuration, the C2000 has heading hold/select, VOR, localizer and back course intercept and track. When interfaced with an HSI, the system is designed to intercept a course at shallow angles, but when equipped with a traditional CDI there’s an automatic 45-degree course intercept function. With GPS steering, a $2854 option, the system will intercept a GPS course and approach at any angle.

The pitch expansion option adds altitude hold, attitude command, glideslope capturing and tracking, control wheel steering and pitch trim prompting. Altitude hold systems that have trim prompting warn the pilot when the aircraft is out of trim so they can manually trim the pitch axis. Automatic electric pitch trim, requiring an additional trim servo, takes care of that chore automatically.

If there’s a downside to installing the C2000, it’s the amount of radio stack space that’s required to accommodate the 2.25-inch-tall control head. Century’s solution to this is the $20,000 C4000 and $16,500 Triden systems. These are similar to the C2000 (using the same model servos) but have different control heads (the C4000 uses a Dzus rail mount while the Triden fits in a 3-inch ATI cutout). While these systems currently have limited STC approvals, adding an aircraft on a case-by-case basis could be easy.

Flewitt says since the C2000, Triden and C4000 all fly exactly the same way, the FAA doesn’t require demonstration flight testing for approval. That saves a huge amount of time in the approval process. While the STC list is growing, current applications include the Cessna 182 and 421, Beech Bonanza and Piper Comanche.

Both the C4000 and Triden systems have, in our view, busy displays. There are no fewer than 20 mode annunciators in the C4000. But then again, it has a lot of modes, including integral GPS steering, vertical speed select and hold, plus glideslope capturing (from either above or below the glideslope—a useful feature that many systems don’t have).

Other basic models include the panel-mounted System 40 and 50, using a separate turn coordinator and controller. These systems are nearly identical to the System 20 and 30, except for mounting (none will support automatic trim). The way we see it, there’s little advantage buying the two-piece 40 or 50 system unless you want localizer backcourse tracking, a function that’s lacking in the 40 and 50. On the other hand, the System 50 is all self-contained, with a pitch computer built into the console. The System Thirty requires the installation of a remote pitch computer—increasing the labor effort.

The System 60-2 is aimed at larger aircraft and has remote pitch and roll guidance computers. It has many of the features of the 55X, less GPSS.

Avidyne DFC90
Avidyne’s DFC90 plug-and-play retrofit autopilot is designed to drive S-Tec servo actuators, while plugging into an existing S-Tec 55X mounting rack and wiring harness. What’s compelling about a DFC90 upgrade is transitioning from the S-Tec’s analog, rate-based concept to a digital attitude-based platform. It interfaces with the AHRS in Avidyne’s Entegra or Aspen’s Evolution PFD. This means earlier Cirrus models, to name one high-performance application, will benefit from the DFC90.

If you’ve flown a Cirrus that’s equipped with an S-Tec 55, you might have noticed sloppy approach coupling and tracking, especially in strong winds. The DFC90 solves these issues, based on our evaluation. It also steps the interface up a few notches, with airspeed hold that’s commanded on the airspeed bug of the PFD. Unlike the 55X, the DFC90 doesn’t require manual arming of its GPSS mode. It automatically engages GPSS mode when you’re tracking a GPS course. There’s also a fully functional flight director.

The other draw is envelope protection, including a straight-and-level mode that recovers from unusual attitudes (recovering to wings-level from 60 degrees of bank and 30 degrees of pitch). The DFC won’t let the aircraft get too slow or too fast, pitching up or down accordingly.

We like the DFC90s ergonomic design, with mode logic designed for an easy transition from a 55X. But don’t expect a while-you-wait drop-in installation. Most existing Entegra and Evolution PFD systems will need to be upgraded—running anywhere from $3500-$6000—on top of the $9990 cost for the autopilot computer. Installation might cost $1500 to $2000, including flight testing.

Avidyne recently added STC approval for the DFC90 and Aspen Evolution combination for a wide variety of Beech Bonanza applications, as well as approval for some models of the Cessna 182.

Choose Carefully
The key is selecting the proper autopilot for your mission and airframe. Since an autopilot will likely expand your mission, consider one with advanced approach capability, especially if instrument flying is your plan. For higher-end aircraft, accept that pricier, higher-end autopilots will be better suited than entry-level models. This includes models with autotrim, yaw damper and attitude-based control logic.

For tighter budgets and lighter airframes, the S-Tec 20 is our top pick if you can live without altitude hold. You can always upgrade later by adding the additional components. The Avidyne DFC90/Aspen Evolution combination wins for performance. With a growing STC list, it could be the easiest way to advanced functionality at a lower cost.