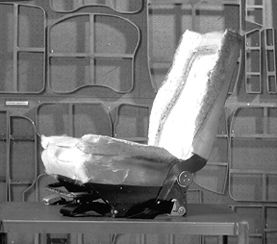 Most were built with nylon webbing that sags with time or cheap foam thats long since lost its resilience. Upholstery shops sometimes deal with this merely by stitching fresh fabric over the old stuff or by replacing the underpinnings with more of the same, although some shops make an honest attempt at improving the seats underlying foundation.

One company thats kicked things up a notch is Oregon Aero, which has made a handy little business out of marketing the heck of an open-cell foam product know as conformal foam.

This stuff is used in everything from headsets to seatbacks, both as a comfort improver and to improve crashworthiness and fire resistance.

Oregon Aero offers a specialized service to refit standard aircraft seats with conformal foam, shaping the seat bottom and back to improve comfort without modifying the seat significantly enough to require an STC or Form 337 for FAA approval. We recently had Oregon Aero redo the pilots seat in the company Mooney. Heres a report on the process.

Job one is to get the seat out to Oregon Aero. In our case, that required removing it and dissembling the seatback and bottom, at which point the seat will easily fit into a large cardboard carton. (We recommend insuring the seat for its actual replacement value, which could be as much as several thousand dollars for some aircraft.)

If scheduled in advance, turn around time for this work is two to three days, according to Oregon Aeros Tony Ericson. In our case, the airplane was in annual so we were in no hurry and the refurbished seat was sent back in two weeks.

For a flat $495 per seat, Oregon Aero strips the old seat back to bare bones and builds it back up with conformal foam. The company can work with any style seat and virtually any vintage. A bench seat, for example, might cost up to twice as much as a single front pilot seat.

Aircraft seats generally consist of steel or aluminum frames laced with webbing or fitted with aluminum pans to support foam upholstery of some kind. (Our Mooney has the pan type.) Since the webbing tends to sag over the years, Oregon Aero can replace it, but the seats basic structure, its adjustors and so on, isnt altered, although broken parts can be replaced. (This work is outside the basic $495 charge.)

Customers have three choices after the foam work is done. They can have Oregon Aero reinstall the original upholstery, send the seats out to an upholstery shop for rework-in Oregon or at a shop of the customers choice or, as many customers are doing, install an Airtex upholstery kit. (You buy the kit, Oregon Aero installs it for the basic price or a nominal fee.)

Although the leather in our 1980 Mooney is far from pristine, we werent ready to reupholster, so we had Oregon Aero stick with the old hides. This required stitching some square patches over the holes where the old seat buttons were but this struck us as a reasonable compromise.

Looks Awful
When we saw photos of the seats original foam, it was immediately obvious why it was so uncomfortable. The stock seats underpinnings were crudely shaped of what appeared to be ordinary cheap foam rubber. We assume this was the original, because the logs indicate no upholstery work since the airplane was new.

Oregon Aeros Ericson told us the company discovers all sorts of interesting stuff inside aircraft seats, including horsehair, carpet padding material and even the carpet itself. Foam tends to be older urethane-type materials which compress and lose shape over the years.

If the seat structure needs repair, as some do, its done at this point. If Oregon Aero has to send the seat out for this work, thats coordinated directly with the customer at an agreed-upon price estimate.

Once stripped down to its foundation, the seat is built back up using shaped blocks of conformal foam, a material developed by NASA during the Apollo years for use in G-resistant couches for astronauts, among other applications.

Conformal foam is an open-cell, viscous elastic material with a near putty-like ability to conform to any shape while providing enough firmness for comfortable support. It has very little spring back and thus doesnt cause the uneven pressure thats thought to be a leading cause of seat discomfort.

Its sensitive to temperature and, as any owner of a LightSPEED headset will attest, it becomes rock hard at temperatures below 30 degrees. (LightSPEEDs use similar foam as earcup pads.) In both the headsets and the seat, a few minutes of body heat softens the material enough for it to do its job.

Despite its sensitivity to temperature, conformal foam has no memory and will return to its neutral position regardless of the number of compression cycles.

From the seats basic underpinnings, Oregon Aero builds up a new profile from a series of shaped blocks, as shown in the photos on page 7. This is very much a cut-and-try process, although the craftsman doing the work has a basic pattern from which to begin.

Once an acceptable profile is built, the blocks are bonded to each other with spray adhesive and to protect the foam against abrasion, its covered with a sleeve of 1/4-inch poly foam. The upholstery is installed atop that layer.

Comfort
So how did the Oregon Aero seat perform in terms of comfort? Quite well, in our view. Compared to the hogged out original, the renovated seat has a more cupped shape in both the bottom and back and gives less when you first sit in it.

We did note that its like concrete in cold weather but the foam softens within three or four minutes, usually well before takeoff. Among three partners who fly the airplane, two found the seat more comfortable, one found it comfortable but noted that the seat bottom seemed too low to see over the Mooneys high glareshield. This can be addressed by either adding more foam under the seat or using an external foam pad. (Well be trying the latter.)

In 1993, Oregon Aero conducted a crashworthiness research project sponsored by the Small Aircraft Manufacturers Association and the FAA.

In the meantime, our view is that the conformal foam probably does increase crash survivability and decreases the likelihood of injury. But were not able to support that opinion with any numbers for stock aircraft seats.

Conclusion
Having flown with the seat for five months, our view is that adding conformal foam is a worthy improvement. At $495, it strikes us as a fair value well worth the asking price.

We found Oregon Aero to be a customer friendly company which did what it said it would and on time. We have no reservations in recommending this product.