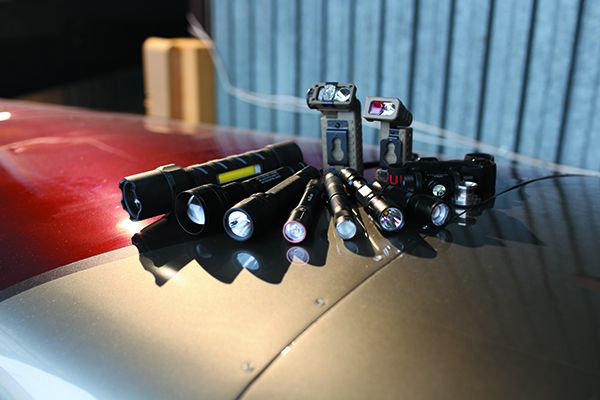 In an age of expanding battery technology, modern flashlights have generally moved away from alkaline power in favor of lithium cells. So why take a step back in time and choose a classic AA-powered model for the cockpit?

Leading the list is convenience, efficiency and battery availability when you might need replacements in a pinch. Think about it. With the proliferation of noise-canceling headsets, most flight bags should have plenty of spare AA batteries to power the headsets, and for night flying and preflights, the flashlight, too.

In this article I rounded up a handful of cockpit-friendly AA-powered lights to see how they compare. 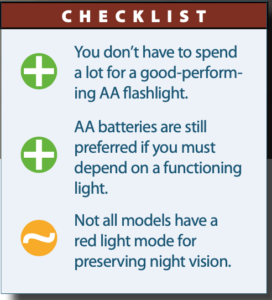 I use rechargeable AA batteries and carry a minimum of four spares on any given flight. And I don’t just use AA cells in the plane, but everywhere in the house and hangar shop as well—clocks, remote controls—the list is endless. So it makes perfect sense to carry an AA flashlight as I’ll always have charged batteries on hand. Likewise, a single battery type throughout the cockpit promotes efficiency and you can buy an AA battery anywhere, anytime. AA alkalines are cheaper too, at generally 66 cents per battery.

A decade or two ago, most of the flashlights on the market used xenon, krypton or halogen bulbs. The need to replace bulbs garnered push-in and bi-pin bulbs, which were finicky and sometimes unreliable, especially when dropped—something that’s inevitable around the aircraft. LED bulbs, however, generally have a 50,000-hour

lifespan. Today, you’d be hard pressed to find anything but LED models. In my testing, a few of the flashlights accidentally hit the ground and all survived.

Having searched the market high and low, I selected the 10 AA flashlights that seemed to best fit the bill for aviation use—both in and out of the cockpit. This should include models with a red lens for night vision, but not all lights have that feature. What surprised me was the difference in output, intensity and beam signature across all the different models.

Beam shape was an issue. I liked a soft, even light across the instrument panel. Most of these lights had a “hot spot,” where the light is brightly focused on a small area, creating the need to move and point the light directly at your target. In most cases, the softer corona, outside the hot spot, was typically too dim to be useful. Two of the lights tested excelled at providing a consistent smooth light signature. More on that in a minute.

Every flashlight tested was well constructed and made of high-quality materials, which is what you want for use in and around the aircraft. Seven lights were made of machined aluminum and three were constructed with composite-type plastics. Based on this initial testing, I would expect all of them to last for many years. We’ve already tossed the lights in our long-term test pool.

Last, as a testament to the quickly changing landscape, the Nitecore MT20 model received for testing in January 2021 was discontinued by the time our evaluation was completed in March 2021. Here today, gone tomorrow. 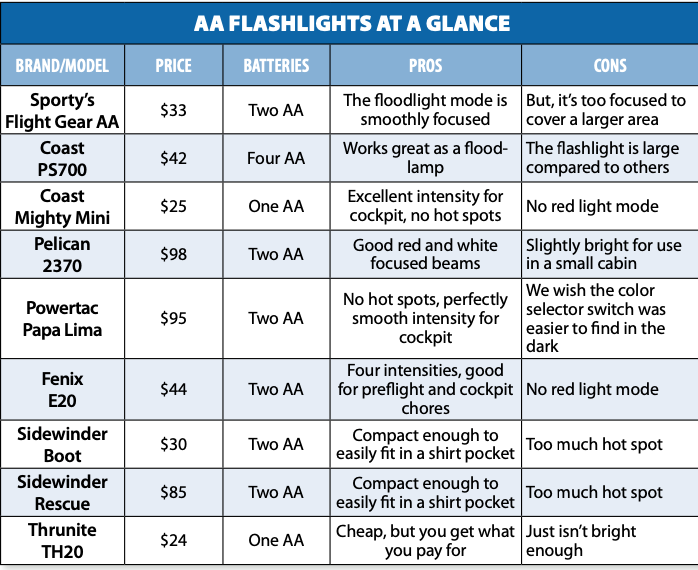 The Coast brand started in the commercial maritime industry and Coast products serve multiple markets, including law enforcement. The $49.99 800-lumen, 240-meter beam Coast PS700 is the giant of the group at 8.75 inches long and is powered by four AA batteries.

The focusable main beam (spot to flood) produces three intensities of white light that’s low enough to use in the cockpit and bright enough for a good preflight inspection in the dark. The dual-side COB array yields white, red and flashing red. While it’s a high-quality light, it just feels too big for use in the cockpit.

Plus, the four-AA battery carrier would be difficult to load in the complete dark. But the light’s magnetic tail makes it good for use around the hangar. I used it once inside my table saw to clean and lube the gears, and clinging perpendicular to the steel cabinet, the magnet did a good job of holding it in any position. It’s weatherproof too. Contact www.coastportland.com.

Priced at $32.95, the Sporty’s 7-inch Flight Gear two-AA flashlight has a smooth focused floodlight combined with dual intensities for both red and white. That’s a lot of versatility in a single light. Made of machined aluminum with a large spherical lens assembly, the barrel-mounted switch is black and red for easy identification.

However, in flood mode the beam was too focused to cover enough area. I found this to be a detriment. In fact, the spot mode is so narrow and bright as to be useless. The body-inscribed night-flying FARs are a nice touch, as is the attached lanyard.

Independent buttons for the red and white light are handy because you don’t have toggle through one to get to the other. Both the red and white modes have low and high settings. Sporty’s says the light is a battery saver because if you are using one color of light and activate a different one, the original color selected will deactivate.

The real surprise was Sporty’s Coast Mighty Mini (4 inch). It casts a nice smooth white light across the full panel. It’s small and easy to carry, uses just one AA battery and was the cheapest usable light, at $25. The only downside is it lacks a red lamp. I think that’s a deal breaker for regular night flying.

One popular seller over at Sporty’s that’s worth mentioning—the Smith & Wesson LED Captain’s Light—has held up well in our long-term test pool. It’s made exclusively for Sporty’s, uses three AAA batteries and is equipped with both red and white lamps. Our model has been replaced by an updated Captain’s Light ($49.95), which we didn’t try for this article because our focus is models that run on AA batteries. Visit www.sportys.com.

To my surprise, the $94.95 5.75-inch Papa Lima aviation penlight was my favorite light for cockpit use. I could see everything without moving the light around and pointing directly at what I wanted to see—like the lights with a hot spot. The intensity of the red and white was perfect.

The rear power switch had a nice solid feel and the simple cylindrical style felt right in the hand. The only drawback was the handle switch for red/white/IR. In the IR mode, there is no visible light output so you are in the dark until you fumble for the switch to turn on the red or white. Nonetheless, depressing the selector switch has no effect when the light is off, so if it’s in white mode when you turn it off, it will come on in white mode. Visit www.powertac.com.

The $44 5-inch 350-lumen Fenix E20 V2.0 turned out to be the best all-purpose light in the group. It’s small, with a recessed tail switch, and it’s powered by two AAs that deliver four levels of white light. It’s plenty dim for a dark cockpit (the second setting seemed best) and easily bright enough for dark preflighting, but sadly lacks any critical red lighting for night vision.

A minor nit—you have to toggle through all four levels each time you want to change the brightness. Visit www.fenixlighting.com.

The Thrunite headlamp, and both Streamlight Sidewinders, can’t be recommended for their low light output.  Too dim for me to easily read switches on the instrument panel. Temper that recommendation with the fact that my eyes are 66 years old—though my younger pilot photographer friend agreed the Thrunite is just too dim to be useful. We used it on a night IFR flight and I had it on for 20 minutes without even realizing it. The red LED instrument panel lights(partially dimmed) overpowered it.

Both Sidewinder beams were too uneven and hot spotted to use, although the pocket clip was a favorite feature.

For all-around use in the cockpit, the Powertac Papa Lima dual-color LED was the top choice, followed closely by the white-only Sporty’s AA light. The Fenix E20, with four outputs (from 5 lumens to 350 lumens), is the best all-around choice if you can carry only one light, but it lacks a red LED.

In a future issue, we’ll take a fresh look at rechargeables. Got one that’s worked well for you? Let’s hear about it.