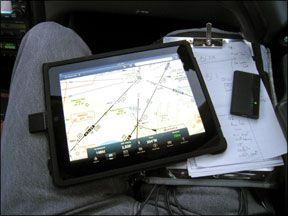 After flying with iPads and iPhones ourselves and talking to many pilots who also do, we’ve concluded there are those who’ve had the internal GPS lose its location—and those who will.

The issue isn’t accuracy, so much as reliability. Some apps purposely don’t offer items like georeferenced approach plates because they don’t trust the GPS.

But that may all change. There are add-on GPS units for the iPad/iPhone hitting the market. Two of the first are the plug-in Bad Elf and the Bluetooth GNS 5870 MFI.

Short story: They’re both far more reliable than the built-in GPS. In our testing, we never saw a loss of GPS position with the GNS 5780 and we only saw a loss with the Bad Elf after repeatedly switching apps while flying. The Bad Elf can be reset in the air by unplugging and replugging the unit into the bottom of the iPad. It reacquired satellites within three minutes. Because the iPad/iPhone GPS is aided by the cell network it sometimes won’t reset at all in the air.

The Bad Elf (a name arrived at after “sufficient quantities of German beer”) is the simpler of the two systems. It plugs into the 30-pin dock on the bottom of the iPad or iPhone and prompts you to download a free app to configure it. After that, plugging in the Bad Elf makes any GPS-enabled app use the Bad Elf position. The app can also deliver firmware updates to the GPS module.

There’s a micro-USB plug on the Bad Elf that can be used to charge the the attached iPad. Because the GPS isn’t much bigger than the stock 30-pin plug, the iPad or iPhone will still fit in most docks you might have. The Bad Elf gets power from the phone (or USB) so it will run down your phone/pad faster than with no GPS. However, it lets you switch your phone to airplane mode and keep GPS. This saves phone power if not plugged in and can prevent interference with panel-mount GPSs or audio systems (both of which we’ve seen or heard of).

Our only concern about the Bad Elf is the inherent flimsiness of the 30-pin connector, especially with an iPad that’s more likely to be loose in your lap rather than in a mount. Luckily, it seems easier to knock it out than break it off (don’t ask). A future connection, for ADS-B weather for instance, might need that same 30-pin connector, which could be a problem. The status light on the Bad Elf is also hard to see in bright daylight.

The GNS 5870 MFI is a Bluetooth GPS that charges via a USB cable but we never recharged it in 10 hours of flight time. When paired to the iPad or iPhone, any apps needing GPS use the remote system. Performance was flawless. Lights on the face show GPS signal lock, Bluetooth status and low battery.

Bluetooth means you don’t have to worry about snapping off the 30-pin connector. But Bluetooth also draws down iPhone/iPad power and our impression is our iPhone discharged slower using the Bad Elf. The iPad allows you to turn cellular and wi-fi off while leaving Bluetooth on, so airplane mode is a non-issue.

Our only beef with the GNS 5870 was turning it on and off. It has no switch; instead you slide your finger up or down the side as needed. Sometimes we had to slide 10 times to turn it on and gave up trying to turn it off. After 15 minutes unpaired it turns itself off.

For overall simplicity and airplane-mode use on an iPhone, we like the Bad Elf. For an iPad that was moving around the cockpit, we’d go with the GNS 5870 MFI.