A year ago I opted for the wingtip-mounted uAvionix skyBeacon to meet the ADS-B Out mandate on my 1966 Cessna 182.  The price was right and the installation, including paperwork, took only 2.5 hours. 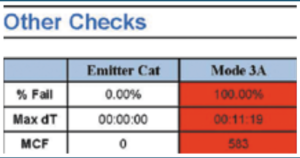 Following the post-maintenance flight to make sure the system worked and qualified for the FAA $500 rebate, I ordered an FAA ADS-B Performance Report for the flight (it’s free, at https://tinyurl.com/y9hrtsyw). Bad news.  The unit had not met FAA specs.  Bright red boxes, as in the photos, are the indication that your system failed to meet FAA standards.

That began a multi-flight exercise that was described in the June 2019 issue of Aviation Consumer.

Once I got a no failures performance report I wa prepared for a long and happy life with ADS-B Out.  Foolish Optimism.

On Oct. 28, 2019, I received an email from Scott Horejs of the FAA’s Technical Aircraft Maintenance Branch in Des Plaines, Illinois, stating that my aircraft’s ADS-B Out had failed to comply with the equipment performance requirements of FAR Part 91.227 on a recent flight.  I was informed that in 45 days my aircraft would be subject to a filter described in FAA Notice FAA-2017-1194.  That filter would prevent processing of ADS-B data transmitted by my aircraft.  That would mean no ADS-B-based ATC and Traffic Information Services-Broadcast (TIS-B)services.  Yikes.

I contacted uAvionix.  Trevor Mac of tech suport got in touch with me almost immediately.

Over the next few days we worked out a game plan to figure out what was wrong.  Once we got together, his test equipment indicated that the transponder’s encoder was reporting that the airplane was flying at 1200 feet below sea level.  I’d probably need a new encoder.

The next step was a call to Western Aviation on Felts Field in Spokane, Washington.  I worked with the head of their avionics department, Tyson Davis.  Of course, his shop was buried in work with the ADS-B-deadline looming.  Between his shop’s and my schedules, as well as Pacific Northwest weather, I didn’t get ithe airplane into Western Aviation until Dec. 16, 2019.

I kept Mr. Horejs at the FAA advised of the steps I was taking to get my ADS-B Out fixed.

Following extensive troubleshooting, the problem turned out to be with the old King KT76 transponder itself – it was toast.  I opted to buy, and have installed, a used Garmin GTX 327 transponder that Western had on the shlf.  I flew home, got on my computer and pulled up the performance report.  Failure.

After cursing whomever fist put an electrical system into an airplane so that there could be more components to break, I contacted Trevor Mack at uAvionix.  His replay was reassuring.  “These errors are not associated with the transponder or encoder it looks like that is fixed.  These minor NIC errors are simply because we needed a little more stationary runup time prior to takeoff.”

bottom line, go fly in radar and ADS-B airspace for at least a half-hour.  On Dec. 29 the weather allowed me to clumb above the 10,000 feet over my ome airport and remain for half an hour.  I noticed that I received no traffic information during the flight and assumed that my ADS-B Out was being filtered.  Good news – the performance flight showed no failures.

I immediately fired off an email to Mr. Horejs to inform him that all was well and attached a copy of the performance report.  Foolish optimism, I just don’t learn.

Mr. Horejs responded to my email with the news that “because of the compliance history” with my airplane, additional flights with no failure idications were necessary before :this case can be closed”.  He followed up by saying that the FAA would like to see three or more successful flights.  Hmm, I was on double-secret probation and hadn’t known it.

Yes, multiple confirmations make sense, but I don’t have to like it.  Trevor Mack told that such a requirement was pretty much standard.  Since then the weather and my work schedule have allowed more more flight.  No failures.

As of this writing, I’m in ADS-B purgatory.  Good part – Mr. Horejs confirmaed that I can legally fly in ADS-B madate airspace because the aircraft is ADS-B Out equipped and I’m trying to verify its operation.  Bad news- my ADS-B Out is apparently filtered and I don’t get ATC services based on ADS-B or TIS-B traffic information until its performance is verified.

This has been a frustrating, expensive pain in the whatsis.  Nevertheless I have greatly appreciated the professionalism and willingness to answer the questions I’ve had as I navigate the mess on the part of Scott Horejs of the FAA, Trevor Mack of uAvionix and Tyson Davis of Western Aviation.