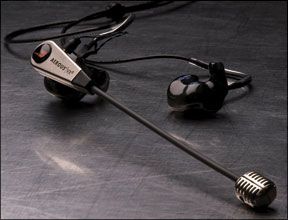 Ever wonder where can you could get a lightweight in-the-ear headset made with the utmost attention to fidelity, designed for serious audiophiles who happen to be pilots? Someone, it turns out, has actually thought of this.

In 1995, Jerry Harvey created a high-fidelity in-the-ear earphone and started a company called Ultimate Ears. These

appealed to performing musicians who liked their in-ear monitors, but it quickly spread to include more casual users. Harvey left Ultimate Ears in 2007 and started JH Audio to build the Aerous-no-nonsense audiophile earphones with a mic-designed for pilots.

Clarity Aloft and LightSPEEDs Mach I are sometimes called in-the-ear (ITE) headsets but the components are still external and simply pipe the sound through generic ear plugs or through optional custom earpieces. Harveys products are real ITE. The speakers are tiny audio transducers embedded inside a custom earpiece.

You start at a local audiologist to get ear impressions. For $50 to $150, the audiologist puts some goop in your ears that sets after a few minutes. This is a critical step that you should approach with great care. You send the impressions to JH Audio and through a computerized, automated process they translate each impression into an acrylic shell -hard acrylic rather than a softer material for its durability and consistency of fit and fidelity.

JH Audio custom tunes each earpiece by precise placement of the drivers inside the earpiece to optimize the distance from the driver to your ear canal. Harvey says he matches the target audio response curve within 1 dB.

The VX1 ($699) has one driver in each ear and is best for clear communications and casual music. The VX2 ($850) and VX3 ($999) are two- and three-way earpieces for the serious audiophile. They all have a lightweight noise canceling microphone on the left or right earpiece – your choice. After that, the mic is removable but not reversible.

These come as basic (non-TSO) headsets. Music in the airplane will have to come from the audio panel. They do offer a tailored version of Pilot Communications Blulink as an integral part of the headset cabling for an additional $260. This allows you to connect a Bluetooth device (cell phone or music source) to the headset while it gives priority to aircraft audio.

Harvey supplied us with an early version of the VX3. Over a few iterations and false starts with fit and early product evolution we discovered that the underlying product was consistent and we liked it. A lot.

While we dont claim to be hardcore audiophiles, we do appreciate quality sound reproduction and were able to recognize many product shortcomings. We find most modern sound systems tend to sound exaggerated with artificial emphasis and heavy bass. Indeed, at first our VX3 seemed rather dull and thin since it has no such exaggeration.

In short order, though, we realized that the Aerous produces very clear, accurate sound. Comparing it to Bose X and LightSPEED Zulu -both acknowledged fidelity champs -we found we could hear even the aircraft radio more clearly and we especially enjoyed the high fidelity music from either the audio panel or the Blulink.

Since these custom earpieces fit in your ear, theyre effective at blocking outside noise in the typical airplane. We found the mic to be a bit too sensitive, but it is adjustable and it sounded clear and accurate. The Aerous is comfortable and durable and we honestly could hear the improvement over other headsets.

Do you need one? Hardly. You can get good headsets costing less than half as much. But, thats not what its about. We think JH Audio has a winner if the last degree of sound quality is important to you and youre willing to spend over a thousand dollars to get it.