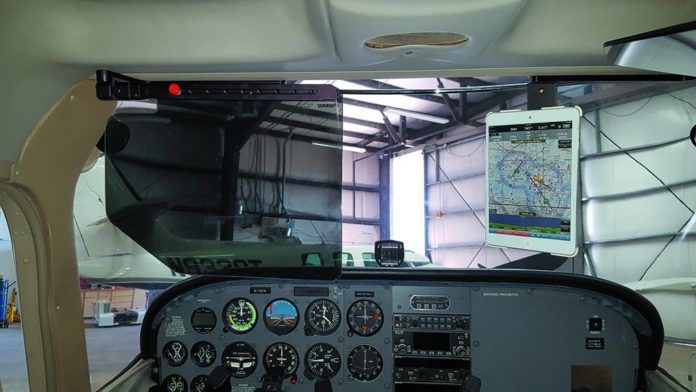 The lowly aircraft sun visor isn’t really a safety accessory until you have to land on runway 27 an hour before sunset on a summer evening. The accident record is peppered with pilots who lost control because they lost sight of the runway at a critical moment due to sun glare. Into this narrow breach of need several companies have stepped up, offering improved visors and shades.

And they aren’t entirely about safety, but also comfort. Squinting into a low sun or being broiled through a canopy or windshield for several hours gives a bright new dimension to the definition of misery. Fortunately, a range of products are designed to address this annoyance and the market is somewhat more competitive than it was the last time we visited this topic.

Visors and shades sort themselves into two categories: Permanently installed replacements for OEM equipment and portable or temporarily installed visors to cut the glare on demand. These span the price range from under $5 to several thousand for top-of-the-line installed visors for turbine aircraft. We’ll examine some of the popular options in this report.

Installed visors in legacy aircraft run the gamut from not that bad to barely adequate versions of automotive-type visors. Older training aircraft are notorious for minimal if not missing visors. The two companies plying the replacement OEM market are the well-known Rosen Sunvisor Systems and, more recently, Vantage Plane Plastics with two lines of visors for Cessna and Beechcraft aircraft, with more approvals pending.

Rosen is a constant fixture at the major shows and has been in the visor market since 1985. Although it started in aviation, the company expanded with visors for the military, transportation and heavy equipment markets. By most standards, Rosen visors are considered top of the line with prices commensurate with the premium market the company plies. Rosen has more aftermarket approvals than any other visor manufacturer.

With its first visors, Rosen took visor design several notches beyond even the best OEM offerings of the day. Rather than an upholstered flap, Rosen introduced optically balanced acrylic visors supported on nicely machined articulated mounts customized for each aircraft. Although the visors fit in the original mounts, they offer better glare protection for being larger, with enough transparency to see through without giving up the desired protection. Rosen visors are more adjustable than most OEM visors, albeit with one caution: They can be delicate and require care in repositioning lest the plastic break.

With Rosen quality comes a moderately high price tag that varies with both the aircraft and the mounting style. (Some visors are center mounts; some are side mounts, automotive style.) Aircraft Spruce lists a pair of center-mount Rosens for a Cessna 172 at $343, while a Cherokee center mount set costs $419. No surprise that more capable aircraft also require more expensive visors. A set for a Malibu retails for $1590.

Rosen covers most models and even has universal mounts for amateur-built aircraft. The visors use the original mount point and generally don’t require modification to the aircraft, although some may require minor mods. The prices include the necessary STC to replace the OEM visor, if the aircraft was so equipped.

Rosen visor systems can be adjusted to place the lens between the pilot’s eyes and the sun, just above the glareshield. In addition to pivoting in two axes, they can also be adjusted along the length of the mounting arm using a small thumbscrew. Once adjusted, they stay put.

Rosen has recently introduced a new mounting system it calls a Monorail. The mount is a curved metal rod shaped to the contour of the cabin ceiling above the windshield. The visors are suspended from the rod and can be moved laterally along the rod’s length for adjustment or pivoted up out the way against the ceiling when not needed.

Rosen originally developed the Monorail for turboprops and light jets, but it’s beginning to migrate the system into smaller aircraft. In keeping with demand for cockpit accessories, the Monorail can also mount a moveable bracket for a tablet, as shown in the photo on the opposite page. As with Rosen’s other products, the anchor point of the Monorail is the original mounts for the OEM visors. We don’t have Monorail prices for smaller aircraft yet, but for jet aircraft, the system retails in the $1500 to $2200 range. More prices and applications are expected during 2016.

Competing with the top-of-the-line offerings from Rosen in the installed visor market are two product lines from Vantage Plane Plastics, a company well-established in the PMA replacement plastic field. While Vantage also sells the Rosen line, they offer ARFC visors for Cessnas and Ayers visors for Beechcraft and experimental aircraft. Like theRosens, ARFC visors use the original mounting points and have a dark lens that pivots down from a single axis mounting point. Vantage has a long list of Cessna approvals for its visors, most priced at $192.79, although some sell for $225.50. Specs on the installation documentation describe the lenses as cast acrylic Lucite.

The ARFC products we examined are robustly made, but not, in our view, quite up to Rosen quality. (But then they cost half as much.) The sample we were sent had a stiff metal bracket riveted to the lens and the lens itself was dark and optically true.

A step up is the Ayers visor system from Vantage. We would say this product is in the Rosen style, with a dark lens attached to a concentric rod arrangement that allows lateral adjustment across the width of the cockpit.

The attach point is a base that screws into existing mounts. At $399.95, the Ayers products are priced to compete with Rosen, but only Beechcraft airplanes are approved. Also, we noted that the edges of the lens were sharp and could have used some dressing with Scotch-Brite.

For owners not ready to invest in Rosens or not disposed toward mounted visors, there are plenty of inexpensive stick-on choices.

One of the most effective, in our view, is the RAM Universal Sun Visor. RAM makes ball-and-socket mounts—RAM means Round-A-Mount—and in its prodigious line is a standard suction cup that sticks like glue to smooth surfaces. To this, RAM attached a dark tinted lens via an articulated socket arm. The suction cup can be mounted on a side window or a windshield, as long as the surface isn’t too curved.

We tried this product in a Bonanza and found that the bottom edge of the lens could be adjusted to the top of the glareshield, shielding the eyes entirely from direct glare. It’s a bit awkward to adjust and is probably best suited for occasional use, but at about $70 complete, depending on vendor, it’s well made and a good value against more expensive permanently installed visors.

For aircraft with interior exposed tubing, RAM has a clamp mount called the Claw that can be used in lieu of the suction cup. For storing the lens when not in use, we think a felt bag would be a good idea.

We found several other stick-ons suitable for occasional use, ranging from the Dim-It and Sun Spot moveable visor, the Adjustavisor and the Slap On Sun Visor. The principle is the same for all of these products, even if the execution varies. The Dim-It and Spot have suction cups and are simply placed to block the glare. The Dim-It is rectangular and larger than the Spot. Depending on source, it varies in price from $7.95 to $11.95. The Spot retails for $13.95 from Aircraft Spruce and Spruce also has a circular Dim-It version called the Mini Dim-It shade for $6.95.

The Slap-On Sun Visor is merely a smoked sheet of heavy plastic that applies to a canopy, window or windshield where needed. It retails for between $4.95 and $7.95, depending on size. Two recommendations here: If that style appeals, buy several because they’re cheap and once wrinkled, they’re pretty much useless. Keep a sturdy mailing envelope with a cardboard sheet inside to store them and protect against damage.

One unique product that’s more of a shade than a visor is Rosen’s Crew Sun Shade. For $15.60 from Aircraft Spruce, the sun shade, as the name implies, is a collapsible translucent shade with a pair of suction cups to mount it on a windshield, rear window or canopy. It cuts glare substantially and also appears to reduce cabin temperature. The shade collapses and folds into a small zippered pouch—with effort. But it’s the neatest stowing of all the visors or shades. We suspect rear seat passengers would get the most use out of it.

For as sure as we are that everyone wants a set of Rosen visors, we’re just as sure that not everyone can afford them. But they’re top-of-the-line equipment and recommended without reservation. If you own a Cessna, lucky you. Vantage’s replacement visor is a high-value alternative to the Rosens. True, it’s not as well made, but it costs a lot less, too.

As for the stick-on shades, two stand out: The RAM Universal Sun Visor and Rosen’s collapsible sun shade. Both are well-made stand ins for expensive permanently mounted visors and will do the job of cutting dangerous or annoying glare. That’s not to dismiss the other stick-ons by any means. Any of them will do in a pinch.