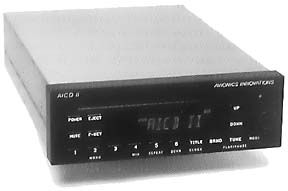 Most aircraft owners we know rightfully concern themselves with instruments and equipment in the panel that make them happy. But what about your passengers? Are they happy? Sadly, many arent.

They may be nervous or bored. Or both. In my experience, a good sound system and decent music can help soothe the passengers nerves and on a long solo flight, a radio and some nice tunes will make the miles slide by more pleasantly.

Yet other than a scratchy ADF, most light aircraft dont have an entertainment system worthy of the name. But now that CD players have become commonplace, a couple of companies have packaged them for aircraft use.

And one even has an FM radio, a real plus in our view. Products from both companies perform well but they also have significant differences in features if not quality.

Under $2000
As avionics go, the entertainment products from Avionics Innovations, a California company and PS Engineering, widely known for its intercoms and audio panels, are relatively inexpensive.

Before comparing the models we should note that although these devices sprang from the audio world, theyre not just prettied up versions of cheap automobile CD players but higher-end stuff meant to survive the rigors of aircraft use. All three models are available in standard rack width, 6.25 inches, and all operate on 12 to 30 volts. In addition, all models offer the usual CD player buttons, (stop-play-pause-fast forward-fast backward-rewind- reject-volume-repeat-skip), a CD frequency range of 5Hz to 20Khz and a distortion level of less than 1 percent, which may deliver more audio quality than you can truly appreciate in a noisy cockpit.

Avionics Innovations has been in the light aircraft entertainment field the longest, introducing its first PMA-approved CD/radio player in 1996. Based in Ramona, California, the company sells the AI-CD III player, which combines an AM/FM stereo radio with a CD player and lists for $1595.

A Comant Industries CI-222 antenna is required which lists for $175. Shop time to install varies by shop and aircraft, of course, but we think eight to 12 hours of labor is a realistic number, bringing the total invoice to the $2500 to $2700 range.

The player offers an AM/FM stereo radio and CD player combination. Features on the player include electronically controlled base, treble and balance buttons, horizontal or vertical mounting capability, 24 radio station presets, automatic frequency store, seek tuning both up and down, CD repeat and random play modes, plus a window display with back-lit buttons and digital clock.

The AM/FM radio has digital circuitry, which largely solves a problem inherent in using conventional broadcast radio at high altitude: Multiple frequency interference. In the old days with manual tuning, radios would sometimes lock onto two stations at the same time, which limited their practicality.

With digital circuitry, the radio will lock onto stations and hold them without bleed-over. Weve noted that when theres a great distance between two stations (in two different cities) utilitizing the same frequency, the radio is able to sort out the interference. By pushing the Local button on the display, the AI-CD circuitry automatically cancels out the weaker station.

The radio also has the ability to pre-set favorite stations into the radios memory, just as you would program your car radio. The automatic program memory button allows you to push a button when flying over a city and the radio will automatically pick up the strongest stations and put them into the radios memory. This feature is valuable when flying over an unfamiliar city or a vast wasteland and greatly helps in reducing pilot workload.

Some pilots who ask about FM performance in an aircraft question the ability of the AI-CD player to lock onto radio stations for any reasonable length of time. Its true that you fly out of range of broadcasts quickly, variable with the aircraft and groundspeed, of course. On a recent cross country trip to Oregon while flying at 10,000 feet, we kept an FM station solidly locked in stereo until we were 95 miles away from the city. In a fast airplane, that might take only 30 minutes. On the other hand, if youre listening to any kind of network broadcast, such as National Public Radio, you can usually find another station carrying the same show.

Bottom line: No, its not like listening to the radio in your den and it does take some fiddling to keep the stations you want in tune. On the other hand, you cant fly your den to Portland.

CD use is conventional, albeit not quite as convenient as a multi-disc changer found in the typical automotive sound system. A CD is loaded into the front of the player and the track is automatically displayed in the window.

PS Engineering
Founded in 1985, PS Engineering all but rules the standalone intercom market and is a major player in the audio panel field. The company has just recently entered the CD player market with two CD players, the PCD7100-I, a CD player and intercom system combination and the PCD7100-P, a standalone CD player which contains its own control set independent of an audio panel or intercom. Installation of the standalone player is similar to the AI unit but a bit less involved, since it has no radio and no antenna is required.

However, depending on what else is in the aircraft, the PCD7100-I may require more labor, since the intercom stations will have to be wired or perhaps rewired to benefit from the players stereo quality.

If you have an older airplane and have never had an intercom system, then you may be in for 22 to 30 hours of labor charges compared to just a couple of hours for installing the CD-only player. The PCD7100-I intercom system has PS Engineerings IntelliVox, a way of digitally controlling the airplanes intercom squelch system. It can handle up to six intercom stations and lists for $995, a good value considering the capability. The PCD7100-P, CD player only, doesnt need an intercom or audio panel and can power up to four headsets. It lists for $695. Yet another variant, the PCD7100-R, is meant for remote mounting, although it still has to be accessible for disc insertion and removal.

Both PS Engineering CD players are outstanding performers and do everything a CD player should. The five-backlit CD buttons have LED mode annunciations for visibility at night. We were impressed with how PS Engineering has integrated the intercom into the entertainment functions. In ISO mode, the pilot hears only aircraft radio traffic without music or intercom interruptions. In CREW mode, the pilot and co-pilot hear the internal CD player and radio traffic. The passengers can either listen to the internal player or use another audio source, depending on installation configuration.

Although the CD plays only one disc at a time, the unit itself has two music sources so the pilot and co-pilot can listen to one CD and the passengers can listen to another CD input from another player or even watch a DVD movie, which will have to come from a portable source carried onto the airplane.

In the ALL mode, all intercom positions hear the aircraft radios and CD player and the proprietary Soft Mute circuitry takes effect. The mute mode automatically kicks in if there are any transmissions over the audio system, whether they are ATC or one of your passengers. The music immediately recedes in volume until the person speaking stops talking, after which it will gradually rise in volume until it reaches its previous level.

You can override the muting by pressing the right volume control button. The player also has an automatic fail-safe feature, which connects the pilot directly to the aircraft radios if power is removed from the player for any reason.

The PCD7100-P can also be bought with Digital Recorder Aural Warning System (DRAWS) that stores up to six programmed alert messages to direct the pilots attention to out-of-limits conditions if interfaced with compatible aircraft systems that generate audio warnings. Bendix/Kings new Baby GPWS is an example. The DRAWs system is a $170 option and is available in the P version of the CD player only. The PCD-7100I-the combined CD and intercom version-also has a clearance delivery recorder with 60 seconds of record time. Its a $130 option.

Choices, Choices
On a purely audio quality basis and based on a bench comparison, our audio expert, Art Dudley, picks the PS Engineering units as the winner over the AI. We didnt fly the two side-by-side in the same airplane so we cant comment on how they sound in the rough-and-tumble of the cockpit. Suffice to say that all three players offer more than acceptable sound quality for the average user, with the edge belonging to PS Engineering. If money is no object and theres already a good stereo intercom system in the aircraft, the AI-CD III has the advantage of AM/FM radio, a plus if you tire of a limited song collection or want to catch up on the news. On the other hand, if you need an intercom upgrade and AM/FM isnt a must, the PS Engineering 7100-I strikes us as the better choice. Besides saving $500 to $1000, you get an outstanding CD player and a PS Engineering state-of-the-art intercom system with IntelliVox. (One additional choice, by the way, is the AI-AM/FM, a standalone radio receiver only that sells for $995.)

Last, if budget alone drives the purchase, the PS Engineering standalone CD player is the only choice. It can either be coupled to your audio panel or become a totally self-contained CD music delivery system for up to four positions.

One last but important point: Note that the headset is the weakest link in the music delivery chain. That means that whichever unit you purchase, the music reaching your ears is only as good as the headset. Many outstanding aviation headsets lack a mid-range and are lousy for music.

A good place to start your research is the December 2000 issue of the Aviation Consumer, which offers an indepth review of headsets suitable for stereo.

William Scherer is a freelance aviation writer, a graduate of the National Test Pilot School and owns a C-T210. He lives in Aptos, California.