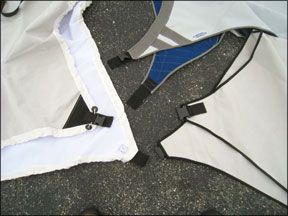 We get glimpses into the thinning aviation market whenever we do a round-up article like this. Out of the eight companies we contacted, we ended up with only four still in business and interested in participating: Aero Covers, Bruces Custom Covers, Kennon Aircraft Covers and Macs Airplane Covers. We found Bruces and Kennon to be the walk-away winners, albeit with different strengths.

Its our opinion that you cant go wrong with a cover from Bruces. The company has patterns at the ready for common and uncommon airplanes and plenty of experience making them work. Need a cover for your F4U Corsair? They can do that.

Rather than a one-size-fits-all approach to common models, there are many options to choose from. We tested both a basic canopy cover for the Cirrus SR22 and their standard canopy cover for the Cessna 172. These covered the windows and doors on both aircraft. But the Cirrus one can be ordered to cover the fuselage and engine cowl in a single cover, and the Cessna can be made to cover more of the wing roots, more of the fuselage, include the engine cowl or any combination thereof.

The Bruces covers are heavy-duty, which could be both a benefit and a drawback. The cover will clearly take the abuse of the elements, and we hear from owners that the covers stand the test of time. But the Bruces covers for the Cirrus and the Cessna took up twice the volume of competing covers when packed perfectly in the bags that arrived from the factory. After stuffing the things haphazardly back in the bags during our testing-as the winds picked up and the temperature dropped-the difference was even more noticeable. The Bruces covers were also two to three pounds heavier than competing designs.

The covers have a soft liner on the inside and strapping material under the buckles to protect the aircraft. They also had bungee material strung through the edge of the covers. This worked well to snug up the cover and made it easier to attach once the buckles were set for the right length, because we could stretch the cover a bit, connect and then it would pull tight on its own.

white or rain is pouring down) and that it used a snap to attach above the windshield. The snap is added to the fuselage by replacing one of the screws holding down the windshield fairing. A stiff rod keeps the cover straight between the snaps.

The snap avoids tossing straps or cloth over the top of the airplane. We know of one Cessna that has the top of its flaps utterly pockmarked by years of cords being tossed over the wings to connect its cover. The snaps also made getting the cover stabilized in a wind, well, a snap. Bruces offers an alternate design where cloth goes over the top of the canopy to protect skylights that doesnt require the snap.

The 172 cover we tried costs $395. Extending the coverage lower on the fuselage (below the windows) raises that to $455. If you went for full coverage including the engine cowl and hail protection (but not the wings-see sidebar), it could run $1030. The SR22 covers range from $455 all the way to $1740 for near hangar-like protection.

Working with the companies before the covers were shipped, Keynon was the most concerned with the exact placement and dimensions of the antennas probes. It showed on the SR22 cover that was the best fitting cover weve seen. Areas over each flat antenna were reinforced and pockets were made for the items that stood up. Bruces did this for the Cirrus dorsal antenna, but Kennon also did it for the fuselage handles to climb up on the wing. That made climbing up with the cover installed easier.

Kennon covers are lined with a material they claim is a better choice than the traditional soft, fuzzy liner, as the fuzz, and its resultant static, could retain grit that would scratch the aircraft. This choice may be part of the reason Kennon covers are lighter and pack smaller than Bruces. Like the Bruces covers, there is extra webbing to pad the buckles. We were impressed with the apparent construction quality from Kennon. We also thought the Kennon cover was the best looking of the lot, if youre concerned with fashion as youre buttoning up your airplane against the elements.

The Kennon 172 cover wasnt as perfect a fit as the SR22 version was, but it was fine once we got its straps sized right. There are two belly straps, which we like, but there is also a line from the rear strap to the tail tiedown to help hold it tight. Were not sure this is necessary. The Kennon 172 design also has straps with clips that toss over the top of the wind, which weve already noted can chip paint over time.

Kennon pricing is simple. A high-wing cabin cover is $395, with an extension to cover a skylight for an extra $50. Low-wing covers range from $425-$690 depending on how long a fuselage you need covered.

The entrants from Aero Covers and Macs Airplane Covers had some clever points. The SR22 cover from Aero Covers had the traditional front and back around-the-belly straps, but the center strap simply connected around the wing step. Thats one less reaching under the plane, and at the fattest part of the fuselage. However, the dorsal antenna simply went through a hole in this cover, rather than the pocket used by Bruces or Kennon.

Aero Covers 172 cover was a good fit, but the second of the three belly straps interferes with the door opening with the cover installed if you just need to get something from inside. The covers also had no liner and no material protecting the fuselage from the connecting clips. The company is Canadian, so in Canadian dollars its $350 for a high wing and $390 for a low wing.

Macs only sent us their 172 cover, but it was a clever design where cloth was tossed over the center of the fuselage rather than straps. It was the smallest and lightest, and also the only design that offered access to both doors with the cover still installed. Rather than Velcro closures at the door, this cover used zippers that zipped up from the bottom. We found this more cumbersome than the Velcro used by others. The cover is a bargain at $230, however. It can be had without a lining for $180.

When youre shopping for a cover, be sure to get exactly what you need. For example, an over-the-top fuselage cover would not work on the 172 we used without some pocket for the roof-mounted OAT probe. Get the exact measurements for any antennas or probes that stick out.

None of these covers extend far enough to cover the fuel caps on a 172. If leakage at the caps is a problem you have, you might need some customization or a design that reaches further outboard on the wing. As the cover is custom made for you, this should be an option.

Then pick a color that works for you. Do remember that a cover is a sacrificial item that weathers instead of your windows and paint, but its a lot cheaper than replacing those items, too.