In our long-term trials of new small-bottle oxygen tanks from Aithre and Aerox, we’re confirming what we suspected early on: You can suck a tank dry pretty quickly. Sure, these compact bottles (as small as 47 liters) aren’t really intended for feeding an entire cabin for hours in the flight levels, but it sure makes sense to maximize the endurance by eliminating waste. 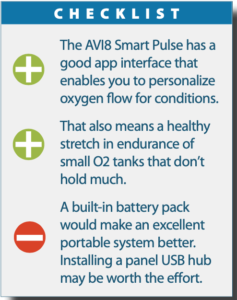 The theory behind the AVI8’s micro-burst oxygen delivery system is pulse demand—where O2 is delivered in efficient pulses—based on respiration, rather than at one-shot gulps. Aithre says this results in up to a seven-times savings in oxygen—something that’s critical for a small-tank’s limited supply.

The AVI8 device, which straps to the oxygen bottle, measures 5.91 by 3.94 by 2.17 inches, weighs 2 pounds and connects with a pushbutton O2 flow controller. That offers some flexibility in storing the system in the cabin, and Aithre said it can be mounted to the instrument panel. For certified aircraft, check with your installer on how it might be signed off for service. The AVI8 device requires external power—either from a supplied portable rechargeable USB power bank or through ship’s power via a panel connector. Like other Aithre products that require external power, we wish the device had a built-in rechargeable battery. This would eliminate the USB charging cable that’s tethered to the unit. The better option (aside from a built-in battery) is connecting to USB panel power. The device has plug-in for two users.

Using built-in algorithms, the portable AVI8 monitors for oxygen flow and periodically checks for active inhalation not by pressure, but with precise optical sensors. While other pulse demand systems are pressure based (Mountain High’s O2D2 as an example), Aithre stresses that its optical-based AVI8 is a more efficient means of delivering pulsed O2.

Aithre’s Jessica Stephens pointed out that flow from pressure systems can bleed off over the length of the supply tubing, but the AVI8’s optical sensors recognize molecules moving through the tubing. This allows the system to detect the user’s exact breathing patterns, delivering more precise and efficient microbursts of oxygen throughout the inhalation period. Simplified, think in terms of drinking small sips of energy drink as you need it, rather than guzzling half the Podium Chill bottle in one shot.

While the main goal is to save oxygen, Aithre’s microburst pulse tech still delivers sufficient (and programmable) oxygen delivery over the inhalation period that’s limited to Aithre’s own bottles and regulator setup. In other words, you can’t plug it into an Aerox bottle and regulator, as an example, and expect the same accurate delivery of pulsed O2. We compared the Aithre and Aerox compact bottles in the April 2021 Aviation Consumer.

“Our AVI8 is used with our regulators, and that is how we know the volume and flow rate that’s sent out to the user, and we can do that without additional external hardware,” Stephens explained. Third-party regulators would result in inaccuracies, creating a false volume and flow-rate reference. Ultimately, you wouldn’t know if the system was delivering the amount of oxygen you really need. And dialing in the precise amount of oxygen for each user that’s plugged in (the current AVI8 supports two users) is what the Smart Pulse system is all about, made possible by the company’s Connect biometrics app, which only works on iOS.

The AVI8 device has limited user controls because a major part of the interface is handled within Aithre’s Connect smartphone app for iOS. We’ve watched Aithre’s Connect interface evolve since the company made its first showing at AirVenture in 2019, and it has come a long way in a short time.

We like the app’s ability to constantly monitor (in real time) pilot and passenger SpO2 levels and other biometrics, while keeping tabs on the endurance status of the oxygen bottle. The new AVI8 takes the interface to a higher level because it automates and personalizes the flow based on a variety of preset conditions and parameters.

Since the AVI8 is a true two-person interface with individual plug-in ports on the top of the case, the Smart Pulse system independently evaluates each user’s inhalation cycle, and delivers them oxygen when the app setting is in Auto mode. Unlike traditional systems that are shared between two users (who then have to manually adjust their flow meters to determine how much oxygen they need), the Aithre system individualizes the flow, and only flows oxygen when it’s needed.

The interface is enhanced with Aithre’s Illyrian continuous pulse oximeter. It has a sensor that tucks inside a headset cup (for sampling SpO2 at the earlobe), or on the forehead with a sport headwrap.

The Connect app allows you to program the Smart Pulse system when to deliver the oxygen based on real-time SpO2 and heart rate. As an example, if the passenger’s SpO2 drops below 90 percent, Auto mode will automatically flow the oxygen to the passenger based on SpO2 and the pressure altitude.

There are also customized audible alerts (via Apple’s Siri) that can be streamed via Bluetooth to the headset. Better yet, the Connect app keeps a running history of each user’s health during each flight to help monitor trends in how the body is responding to changes in altitude. The Illyrian allows for the Auto mode to automatically make flow adjustments if the heart rate increases, or SpO2 decreases, past a set threshold.

The system can be used as standalone (that is, without the Connect app), which will flow oxygen based on an 18,000-foot pressure altitude. The flow rate is roughly 1 LPM per 10,000 feet of pressure altitude. But we don’t see why anyone would use this system without the app. Without it, you can’t access the tank pressure monitor, Auto flow mode customized settings and parameters, CO monitoring, pulse oximeter, altitude, alerts, trip history and monitoring.

Moreover, this system is always equipped with the Altus Meso portable tank monitor, so the app also keeps tabs on the oxygen tank’s pressure, and with the app you’ll always be aware of endurance and when the tank will be empty.

Aithre says its 152-liter bottle generally has a six-hour endurance, but the Smart Pulse system can extend that to as much as 20-plus hours through the critical inhalation period.

ROLL YOUR OWN SEMI-PORTABLE O2 SYSTEM

For experimental aircraft, there’s a good option for semi-portable mounting. The AVI8 device can be mounted up to 15 feet from the cannulas, and there is no requirement or need to place it on or near your person. Aithre offers an optional plumbing kit with bulkhead fitting to mount the AVI8 and supply bottle in the aircraft’s baggage area, as one example. You can also panel-mount the O2 switch and run the plumbing behind the panel for a clean interface. This installation in certified aircraft will require additional approvals.

The package with a 152-liter bottle, two-place AVI8 Smart Valve system, 0-25-LPM regulator, two dual-prong cannulas and the Altus Meso tank monitor is $1395. Aithre says it’s working on a device to handle more users. For now, we can easily recommend the two-place setup for users who want a personal-sized tank, but want to conserve oxygen by automatically—and precisely—delivering only what’s needed to keep their oxygen saturation at safe levels.

The added functionality and automation in the Connect app—and other accessories that can be added to the mix (including SpO2 and CO sensors)—make it the most advanced portable O2 suite we’ve seen to date.