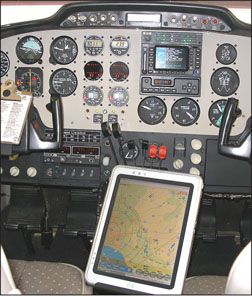 Because I owned a Commodore-64 when Michael Dell was still in grade school, I consider myself an innovator rather than an adopter when it comes to cutting-edge computer technology. So Ive been following Aviation Consumers reporting on electronic flight bags with more than idle interest.As Aviation Consumer has pointed out, finding the ideal EFB solution is not easy and for many owners, it may be a long, expensive quest. What follows is a report on my experience.

Way Back
I began this quest in what now seems like ages ago, with Control Visions excellent Anywhere Map product, which was initially limited to PDAs. The components included an iPAQ PDA, a glareshield GPS receiver, a satellite phone, mounts and wiring harnesses. The satphone mounted with suction cups to a side window where I found a location that worked reliably to make connections in my Cessna 310. This proved far from ideal, as I learned on a trip through the Northwest.

For my tastes, the PDA was too small, although it was fine as a moving map and even for displaying weather. But when Id zoom out too far, the PDA would run out of memory and lockup. Additionally, trying to display an approach chart was clumsy, involving too many steps and allowing only a portion of the chart to be readable. Fortunately, I printed all the charts I needed so I had paper readily at hand.

The solution to this was simple. Pentax (www.pentaxtech.com) shipped one of their PocketJet-II printers-$350 to $450, depending on model-to my hotel in Seattle. I carried a notebook PC and connecting the printer was a breeze.The PocketJet is a tiny thermal printer that uses special paper from Pentax, but dont cringe at the thought of crinkly thermal faxes. The PocketJet paper is far better than that, if not the brilliant white high-rag stock youd use in the office.

The bad news is that Control Visions replication of NOS charts was in such low resolution that the printed copies were barely legible. Control Vision assured me they planned to fix this eventually. Further, I wasnt happy with the awkward satellite phone, either, so Control Vision suggested that I convert my set-up to their EFB package and to XM-based data from WxWorx. To their credit, they offered to exchange my gear with new for the difference in price, which seemed generous.

The new set-up included an XM receiver and software to run on a Windows XP computer. I purchased a Fujitsu tablet PC, which I had no means of mounting in the 310. I assumed I could use this set-up on my lap. The result was a disaster.

Control Visions EFB software wouldnt run to my level of satisfaction. It would often lock up and didnt work well with the XM hardware. Finally, after hours of remedial work, a technician at Control Vision told me that the EFB software wasnt a priority and they were working to perfect the PDA version. With that and because the Fujitsu tablet was too large and dark to work well in the 310, I sought another solution.

Jeppesen Next
My next stop was Jeppesen, whose charts I had used for my entire flying career. Jepp offered two products that seemed interesting: FliteStar, their flight planning program and JeppView/FliteDeck for charts, both of which would run on a PC.

FliteStar is a terrific planner which includes DUATs link capability and Jepps own proprietary weather. This is a tremendous complement to onboard weather because detailed planning/weather charts can be printed immediately before departure.

JeppView is really nothing more than a database of approach charts. Jepp provides pre-drilled paper for its binders which allows printing on both sides-if you have a duplex printer-to obtain a total of four printed approach charts per 8 1/2 by 11-inch sheet. Pentax says many corporate pilots use the PocketJet for printing Jepp charts on the fly and it does so in high resolution. The Pocket-Jet has a rechargeable battery-pack and Bluetooth capability, so its quite practical in the cockpit.

FliteDeck is nearly a perfect moving map program, with good resolution and a host of features that allow easy display of almost any data on a big, easy-to-read display. But, FliteDeck has a failing. As Aviation Consumer reported in its January 2006 issue, Jeppesen offers no XM-based weather capability. I contacted Jeppesen about this huge hole in their product line, but never reached anyone who could assure me it would be addressed. Jepp has terrific tech support, but the lack of live weather is a shortcoming, in my view.

Lets Try Sony
What to do? PDAs were out so the answer seemed to lie in an obscure product not offered in the U.S. It was the Sony U-70 palm computer, sold only in Japan but offered in the U.S. by a few importers, including AirGator/NavAir.They offer a full set-up including software and mounting for the U-70. Although it was thicker than I wanted and perhaps didnt have the battery power Id need, the U-70 looked better than the Fujitsu.

I talked to AirGators owner, Amir Tirosh, who was direct and helpful and suggested that Id soon abandon Jeppesen FliteDeck for his offerings. He may be right. He has not only listened to my concerns and suggestions, but he has integrated them into a string of upgrades to his moving map program. (See the January 2006 issue of Aviation Consumer for a review.) AirGator seems to be working much harder than the rest when it comes to the details.

However, having flown with the U-70 for several months, I concluded that the display, like the PDA, was too small. I wanted to view an entire Jepp approach plate and be able to clearly see it. What I needed was a tablet PC, sized similar to a Jepp plate.

When I began a panel makeover last year, it seemed natural to consider replacing the U-70 with something larger. The Fujitsu was too big and not bright enough for the cockpit and thus far, the best compromise I have found is the Hewlett Packard TC1100 at about $2500. Its form factor is smaller than nearly everything else out there, yet it has a bright and durable screen with tons of memory. Its detachable keyboard and integrated joystick mouse make it the ideal tablet/laptop multi-purpose computer.

AirGator helped me get the TC1100 to interface with my XM receiver and a glareshield-mounted GPS, via Bluetooth, eliminating the wires that would make this set-up otherwise unworkable. AirGator seems to be leading the way in new technology and their ongoing support is nothing short of fabulous, in my experience.

With the TC1100 running on ships power and connected wirelessly to a GPS and an XM receiver, I returned last month from a 30-hour trip that took me through Western Canada and Alaska. On the fly, I connected my PocketJet to print out approach charts from JeppView when my itinerary changed. I used the TC1100 to plan my flights using FliteStar and Jepp Weather. Enroute, I use a combination of FliteDeck and NavAir map programs and use NavAir exclusively to display XM weather.

How Does It Work?
Displaying XM-based weather, especially NEXRAD, has been a huge enhancement to the utility of my airplane. Ive flown trips that I otherwise would have scrubbed because I now have an in-flight view of the weather. Having flown with advanced weather detection displays for the airlines for many years, I find WxWorx better than what I use in airline flying. It provides a better big-picture view, which makes weather avoidance at a distance easier and safer.

One thing not often mentioned regarding WxWorx is that except for a bit of overlap in southern Canada and Mexico, NEXRAD is limited to the Continental U.S., with nothing available for Alaska, so Stormscope and/or onboard radar is still an asset in those areas. What would I like to have to improve the set-up? How about a single suite of software to do all of this? (I know AirGator is working on this.) I still wish Jepp would integrate WxWorx into their moving map, which ought to represent a huge business opportunity. I also wish the form factor of the TC1100 was smaller. Although the picture suggests the TC1100 gets in the way of the throttle quadrant, it doesnt. A slightly smaller tablet would be more convenient.

Since I use the computer for flight planning in the hotel, I need a detachable keyboard such as the TC1100 has. A touch screen like the U-70 would be nice, too. AirGator will be offering just such a machine later this year. Its called a Dialogue Flybook and can be seen here at www.dialogue.com.tw/english-flybook/product/product.htm.

The new models offered by AirGator will be powered by an Intel Centrino processor and include an integrated keyboard and a touchscreen, all in a form factor a fraction of the TC1100s. Ill be watching this product as a possible fifth-generation EFB display. And, of course, as Aviation Consumer has reported, the LS800 from Motion Computing has also been well received.

Conclusion
Finding the optimum EFB and display for moving map, weather and charts is still a work in progress. Panel-mounted displays and PDAs arent very attractive compared to the advantages of a tablet PCs flexibility, in my view. On the other hand, a tablet PCs size is awkward, the display might not be sunlight readable and, incredible as it seems, at this writing, no one makes integrated software to seamlessly perform all the cockpit tasks pilots should expect of these machines. For me, the perfect EFB is a continuing odyssey. Ill let you know when I find it.

Also With This Article
“When XM is MIA”

-Ken Sutton was an airline pilot for the original Piedmont Airlines and then US Airways. He is currently a senior partner at a private economic forecasting company.