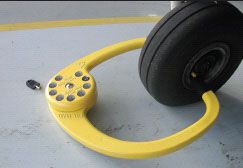 e good news about airplane theft is that its trending sharply downward. The better news is that there are more products than ever to deter theft and, in our view, all of them seem to work as claimed. Its simply a matter of picking the lightest, most cost-effective design. Whether you really need an anti-theft device is debatable, given the relatively low risk. On the other hand, if you fly outside the U.S.-especially to Mexico, the Caribbean or the Bahamas, it makes sense to secure the aircraft more thoroughly than by simply locking it and tying it down. All of the products reviewed here will help.

Robert Collins, who runs the non-profit Aircraft Crime Prevention Institute, told us that he has no reliable data on how effective anti-theft devices really are, but he believes any deterrent is better than no deterrent. When we spoke to Collins in early October, he reported that only six airplanes had been stolen in 2006, a near record low. No one is quite sure why this is so, but it may be an unforeseen benefit of added airport security following the 9/11 terrorist attacks five years ago. Some states, counties and airports are requiring additional locking devices on aircraft, which may further reduce theft.

Anti-theft gadgets are of two types: prop or wheel immobilizers and throttle locks. We tried all of the popular brands we could find. Here are our findings.

Pitbull Tirelock/Proplock
For years, police have immobilized deadbeat cars in place with wheel or tire locks, the Denver Boot being the most well known. The $270 Pitbull Tirelock is a variation on the theme, consisting of a pair of heavy cast aluminum pincer arms joined by a single pivot. The arms have steel rods embedded in the casting for additional strength. If this sounds big and heavy, it is. The Pitbull weighs 10 pounds and measures 18 by 12 inches when folded.

To install it, you spread the pincers and insert them inside the hollow portion of the wheel rim, then close the arms. A series of holes bored in the arm pivot allows a range of fixed adjustments to fit any size wheel. When one of the holes lines up, a Gem-type lock is inserted, which prevents the arms from opening or closing further, securing the device to the wheel.

We tried the Pitbull on the nosewheel of our Mooney and found it easy to install, although getting the lock in place requires a practiced touch. It wants to turn in the bore and to prevent this, you have to apply some sideloading to the arms. Close-fitting gear doors means it wont go on either of the main tires, although airplanes with more gear door clearance would allow this.

On an airplane with wheel pants, the Pitbull may or may not work, depending on how much clearance there is between the bottom of the wheel pant and the rim. Because of the Pitbulls range of adjustment, it can double as a proplock, with the prop grasped between the arms, rather than by the pincers.

Chok-Lok
Does this problem sound familiar? Your baggage compartment is so full of nice-to-have gee-gaws for the airplane that you never have enough room for baggage. The Chok-Lok-an Australian import-addresses that by combining both a wheel immobilizer with a small set of chocks. Initially, we thought this was a goofy idea, but it actually works quite well.

The chocks consist of a pair of heavy plastic wedges attached to two nylon cylinders that slide along a tube, so the chocks can be adjusted to the size of the wheel. The wheel immobilizer is a pincer arrangement similar to the Pitbull, but made of -inch sheet steel rather than a casting. The pincer has a slot that fits over a tab on the front of the chock assembly and a high-security lock holds everything in place. Its a little Rube Goldbergish, but it works quite well, weighs only 7 pounds and is equipped with a zippered vinyl case.

Because the lock is exposed and the pincers are made of sheet steel rather than a casting, we dont think its quite as robust as the Pitbull.

Its weakest point is the pincer pivot, which is a bronze bushing that could be drilled. But that compromise is worth it in lighter weight and because it does what the others dont: It provides a chock, something thats always missing at that out-of-the way tiedown in the wee hours. Since its lockable, the chock portion cant be stolen. The Chok-Lok is available from Aircraft Spruce for $289 to $319, depending on tire size.

Alpha Lock
A less expensive iteration of the wheel immobilizer is the Alpha Wheel Lock 2000 from Aircraft Spruce, for $121.95. This is a no-frills product consisting of a heavy steel weldment with pincer arms that fit into the wheel rims hollow center. One pincer is attached to a length of steel channel that slides inside a slightly larger steel channel, which anchors the other pincer. A 1 -inch diameter length of plastic-sheathed steel pipe serves as a handle.

To install it, you slide the moveable pincer until the devices locking tabs line up which should both allow the GEM-type lock to function while also closing the pincers enough to lock around the wheel rim. Again, on retracts, this may work only on the nosewheel and we dont think it will work at all on airplanes with wheel pants. The lock is supposed to be drill- and freeze-proof-freezing a lock with Freon and breaking it with a chisel or drift is a common theft trick. At 7.5 pounds, the Alpha Lock is lighter than the Pitbull, but not as well made, in our view. Also, it doesnt have a carrying bag or case.

In the bad old days of aircraft theft-that would have been the late 1980s-a common way of securing an airplane was to wrap a big honking chain around the prop and secure it with a big honking lock. The JK Aircraft Prop Lock is just that, except the chain and lock are big honking times two. The lock consists of 6 feet of heavy chain with 3-inch plated links contained in a fabric sheath to protect the prop and the paint. The lock is an enormous device called a Granit Insurance lock.

As shown in the photos, one chain link slips through another link and that single link is then secured by the lock, which has a gargantuan, deep-seated -inch diameter shackle that would be all but impossible to attack with a bolt cutter or hacksaw. This product is a highly visible anti-theft deterrent that veritably shouts, “Ya want a piece of me?” Its easy to install, although the exposed end links of the chain can whack the nosebowl if youre not careful. At 11.5 pounds, its the heaviest of the products we tried and, in our view, it could benefit from a fabric carrying bag, which it doesnt have. Price is $219.95.

Aviation Prop Club
A more subtle approach to the prop lock challenge is the Aviation Prop Club from Aircraft Spruce, which we rank as the most nicely made product of the bunch. This device is an openable tempered steel oval with a four-digit combination l ock on one side. Its sheathed in a weather-resistant, soft plastic material that also protects the edges of the prop against dings. A long plastic remove-before-flight banner is attached to one end of the club.

We found that the lock works nicely and, better yet, theres no key to lose. (Just write down the combination where youre sure you can find it.) The club comes in two sizes, priced at $189.95 and $196.95, respectively. The small version has a compressed opening range of 4 to 5 inches while the larger model will accommodate 6 to 8 inches. Weight is between 2.4 and 2.8 pounds, making it the lightest and easiest to handle of all the external locks. It also has a small vinyl carrying case for compact storage in the baggage compartment.

Youve seen this product in all of the pilot catalogs for years because its one of the first throttle locks to appear on the market. Its a simple, well-designed product thats inexpensive and probably as effective as any anti-theft device short of armed guards. The throttle lock is a short length of capped steel pipe that fits over a push-pull type throttle and is secured with an Abus security padlock. There are two versions, one for vernier throttles and one for non-vernier. Either version is $72.50 from Aircraft Spruce.

At 2 pounds, this product is small and light enough to live in a seatback pocket when not in use and the keys it requires are of the local hardware store variety, a plus. But theres a twist. The Abus lock has a shielded shackle which means the clearance to insert the key is tight, so JK cuts the key in half lengthwise. If you have keys made, youll need to spend a few minutes at the grinding wheel to duplicate the shape of the originals.

From the less-is-more school of design comes the Airlock from Aeroheat Inc. and sold by Aircraft Spruce for $12.95. This product is the ultimate in no-nonsense security, made of simply a plated steel guard that slips over push-pull type throttles and secures with a padlock that you provide. If quick-and-dirty-not to mention cheap and light, at 10 ounces-appeals, this product is a good choice. As ACPIs Collins says, any protection is better than none and Airlock provides at least some deterrent.

Recommendations
Any of these devices are acceptable theft deterrents, in our view. Our three top picks are the Chok-Lok, because it does double duty as a wheel immobilizer and chocks, the Aviation Prop Club and JKs Throttle Lock. Collins recommends having two devices on the aircraft, one to lock the wheels or the props and a second on the throttles. In some airplanes, that wont be a choice, since lever throttles are harder to lock. We havent found a commercial product that will do the job.

Further, to be practical about this, we think the only instance in which anti-theft equipment is a must-have is for aircraft in border areas or those taken into Mexico and the Caribbean, where theft risk is higher. In some cases, insurance companies may require additional locking devices, which arent a bad idea whether theyre required or not.