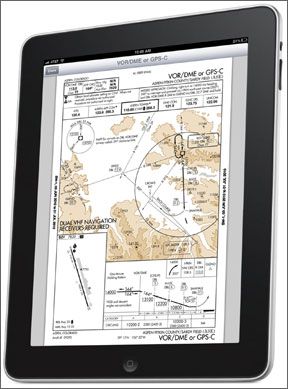 Just for fun, Im writing this article on the virtual keyboard of Apples vauned iPad and, as you can see, it,s not going that we;;

Switching back to a real keyboard, I can now explain that despite the hype, the iPad for general use and for aviation use will do a lot of things adequately, but only a handful of things well. Composing text isnt one of them.

By early June 2010, there were more than 300 aviation apps for the iPad, but the number is technically less because some of those are iPhone apps that will run on the larger device and some are just variations on the same program, such as multiple checklists or POHs.

The iPad may be many things to many people, but there are several things it is not: a moving map, a good navigator or a datalink weather display. I doubt if Garmin will even feel a minor nick in sales from iPad competition. The iPad is, however, an excellent plate reader. There are several ways to obtain and manage plates and Im sure this function will improve as the market matures. It can also do enroute charts and sectionals reasonably well and it flat aces things like weight and balance and E6B calcs.

Although some buyers are salivating at the idea of the iPad becoming the mother of all EFBs, dont hold your breath. It has some issues. First is size. At 9.5 by 7.5 inches, the thing is huge and it tends to consume the cockpit. That leaves a lap or kneemount as the best option. (See the photos on page 10.) In my view, this is acceptable if you dont mind having a largish thing in your lap all the time. If you do, dont buy it for the cockpit.

The tradeoff is a fabulously sharp and colorful screen whose touch interface is close to flawless. Screen navigation is logical and easy to master in minutes. Like the iPhone, the iPad has a built-in accelerometer that senses position and automatically

rotates the screen. This gimmick is fine when you want it, a nuisance when you dont, but theres a hardware lock out switch to keep the screen from freely spinning when youd rather it didnt. It doesnt work with all apps anyway.

Screen glare is always an issue with cockpit displays and it certainly is with the iPad, too. Fortunately, the device is bright enough to power through this, so its not much of a problem unless youre trying to photograph it. Direct sunlight readability is adequate, but sunlight illuminates every smudge on the screen and there are a lot of them. The screen starts to look like a pigsty after a day of use. (You get used to it…)

The 3G-equipped version of the iPad is GPS-enabled, but this is not the same class of GPS that Garmin offers. Theres no external antenna and although the receiver seems adequate, it loses lock and is slow to update position. If Garmin, Control Vision and others werent out there with better GPS receivers, the iPads would be a killer. But they are. So it isnt. In any case, moving map apps-such as Wing Xs-are rudimentary when compared to the capability of typical aviation portables. This may improve going forward. WingXs latest app, released at press time, looks promising.

If youre thinking the iPad would be great for displaying

NEXRAD weather it is, but not in the cockpit. Yet. The hardware is Bluetooth capable, but theres presently no XM datalink receiver to fetch the datastream and Im not sure there ever will be. The 3G-enabled iPad seems to engage AT&Ts 3G cellular network at low altitudes, but its neither reliable enough nor fast enough for count-on-it weather gathering. Further, its geo-referencing is somewhat limited. It geo-references on en route charts and sectionals, but not on approach plates or weather displays. That may change in the future, but not for now. Apples specs say the iPads operational altitude limit is 10,000 feet, but I tried it briefly above that altitude with no ill effects. It uses solid-state flash, so a floating drive head isnt a worry.

Apples App Store is loaded with applications for aviation, but

only a small fraction are what we would consider must-have. Strengths: plate reading, flight planning apps, POHs, E6B-type calculators and reference resources like FAR/AIM documents and textual weather. Okay but not so hot: weather imagery and moving map navigation.

Any app that will run on an iPhone will run on the iPad, but in reduced size. Theres a zoom button to enlarge the display to suit the iPad. This knocks back the resolution a little, but its not objectionable. As of early June, about a dozen apps had been optimized for the iPad and the list grows daily. Thankfully, if you bought the app for an iPhone, can you download it again for the iPad at no charge.

If you dont mind its inflated size, the iPad is an excellent plate reader–FAAs AeroNav charts only for the moment. There are several ways to get the plates, including ForeFlight and WingXs regional purchasing plans or free/donation-based services such as NACOmatic or pdfplates. Both of the latter will require a dedicated PDF reader, such as Goodreader.

The acid test for plate reading is downloading, retrieval and

display. The apps do all of this reasonably well. ForeFlight and WingX, for instance, allow state or regional downloading of plates. ForeFlights procedures for southern Florida, for example, required 33MB and took under a minute to retrieve. If you have a fast connection, you can load the entire U.S. procedures library. ForeFlight charges $74.99 a year or $24.99 per quarter.

To fetch a plate in ForeFlight, you tap an airport tab, type in the ID and get a list of all the procedures. Tap the one you want and the plate appears in full scale. You can pinch scale it or finger pan to suit. The plates are readable in sunlight (just) and at night, you can ramp the brightness to the minimum setting. Its still a little too bright, but its tolerable. WingXs retrieval has a nice browser function that allows finger panning through a series of plates for a particular airport. Both of these apps are works in progress, but from what Ive seen so far, the iPad is as good a plate reader as anything out there-better than a KindleDX and more readable than the SOLID FX8, not to mention being cheaper.

With ForeFlight, the iPad does both sectionals and IFR enroute charts. It scales these adequately-albeit slowly at times-and you can finger pan across the charts and even search them for

fixes or airports. Could these replace paper charts? Given personal preferences, Id say the answer for some users will be yes.

Through apps like ForeFlight or WingX, the iPad can fetch weather briefings with various degrees of ease and thoroughness, including route briefings. ForeFlight and WingX also allow flight plan filing, which you can do from anywhere where wireless or 3G is available and for that reason, I think buying the 3G version is worth the extra cost of the hardware and the AT&T data plan at $30 a month. If you travel often and dont want to be limited by lack of wireless access, itll be worth it.

But…thus far, the iPad apps arent that impressive at the granular briefings some pilots like, with multiple NEXRAD views and the data crunching capability of a full-blown flight planner like Voyager4. On the other hand, try running Voyager on a laptop perched on the wing while youre waiting for the fuel truck to show. So what the iPad gives up in capability, it returns in anywhere access and convenience.

Apps also excel at things like performance planning, weight and balance and E6B functions. For instance, Punkstar Studios has a series of POHs that do all of the principle calculations such as takeoff and climb performance, weight and balance and so on. For $9.99, these are a fair value. Other apps do more detailed CG calcs, power calculations, wind functions and so forth. If it can be calculated, theres probably an app for it.

Does any of this make the iPad a clean sweep of the EFB market? Well, not quite. The aforementioned lack of cockpit weather and moving map capability stunt it, in my view. My guess is this capability wont improve enough to make the iPad an aera killer. On the other hand, its a good plate reader and I doubt if anyone who buys it just for that purpose will be disappointed. Its still cheaper than the FX8 we reviewed in the June 2010 issue. And everyone will find useful favorites in the long list of apps.

The iPads real strength is its general functions-the daily grind of Web browsing, dips in the e-mail river and specialty apps, not the least of which is Dogs Playing Poker. I havent decided if Ill buy one yet and given that ambivalence, I think Ill wait for the inevitable price break, maybe around Christmas.