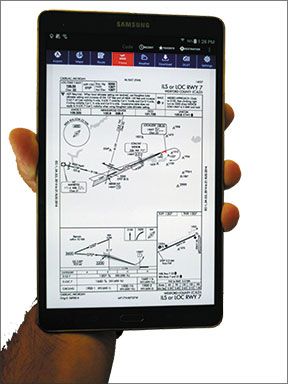 As we’ve said in recent reports, there’s a rapidly growing market of navigation apps designed solely for Android tablets. We think that’s a good thing because our evaluations have proven that many Android devices work well in the cockpit. We even prefer Samsung’s latest Galaxy tablets over Apple’s iPad. Some have longer battery life and better screen quality.

Introduced at AirVenture this summer, AvNav EFB for Android includes optimized flight planning, free georeferenced charts and DUATS interface. We’ve been using the AvNav EFB on a new Samsung Galaxy and like the app’s simplicity and fast map rendering. It’s still in the developmental stages, so it lacks some major features that iOS app users may be used to, including synthetic vision/attitude display and GPS approaches.

Single-touch tab
AvNav EFB was developed by AvNav founder, software architect and Piper Comanche owner Sanjay Kumar.
Kumar originally intended for the app to be used primarily for preflight planning, but ultimately made it a inflight navigation app.

Kumar purposely avoided a deep menu structure and in particular, “back” buttons because he feels they lend to a dated and frustrating user interface. As a result, AvNav EFB—optimized to run on Android 4.0 tablets and phones—was designed with a page-and tab-driven user interface. This means each major function has a dedicated, single-push tab located in a menu bar at the top of the page.

Graphical rubberbanding—that’s where you pinch and drag the course line on the map to modify the route—is always on and results in fast map redraws.

We like the simple but complete terrain awareness feature that includes a terrain altitude optimizer. The app shows terrain and obstacle data along the route of flight, while showing terrain above the flying altitude in red. Additionally, while planning a route, you can experiment by varying your altitude to find the lowest altitude to clear the terrain for the planned route of flight.

On the topic of route planning, SUA and MOA airspace data currently doesn’t exist, but is planned for a future revision, as is AIRMETs, SIGMETs and runway extended centerlines.

We like the simplicity of the apps flight-planning functions, including the straightforward altitude optimizer feature that compares altitudes with ground speed and temperature. Simply tap a VFR/West, VFR/East, IFR/West or IFR/East tab and a chart shows ETE, headwind or tailwind component, fuel burn and temperature for a given altitude.

You can also select an altitude in the flight plan for optimized winds aloft data. Basic navigation data including GPS groundspeed, time, distance and bearing to the next waypoint is displayed at the bottom of the map page.
With the DUAT file and brief function, you can file a flight plan and obtain weather briefings—route or area briefings—directly inside the app. AvNav keeps a history of all filings and briefings that you can review at a later date. Much of the information is automatically copied from the active flight plan, which reduces the need to enter it manually. It really streamlines the process, in our view.

Data on the cheap
A dedicated Airport tab accesses complete AFD information on over 44,000 airports around the world, although AvNav mapping only includes Continental United States. We’re told that Canadian coverage is planned for a future revision.

The airport page function has everything you might want to know about an airport, including frequencies, runways and procedures, weather, NOTAMs, remarks and FBO data, with daily updated fuel prices provided by Globalair.com. This data is accessed with dedicated tabs at the top of the Airport page.

Kumar told us that he’s cautious when recreating this data for georeferencing and if there’s any doubt about the quality and integrity of the georeferencing, it’s excluded from list. You can still view the chart, of course, but you won’t see ownship data on it. Kumar said that as additional quality control measures are put into place, additional georeferenced plates will be implemented.

Like the ForeFlight Mobile app for Apple iOS, AvNav has a Plates on Map feature. This overlays the chart on top of the map display, and Nexrad weather graphics is overlaid on top of the chart.

On a side note, we sensed a bit of apprehension when talking with Kumar about how pilots are using tablet apps in flight. While acknowledging that some pilots use this non-certified data, including georeferenced approach plates for primary navigation, he noted, “It makes me nervous,” he said.

Rightfully so. As a software architect, he knows the more data and functionality you build into an app, the more chances there is of the app crashing. As a result, it’s made him work that much harder to track program crashes and improve the integrity of the app, even if means holding back functionality and available data. In our use, we never once experienced the slightest hiccup in any of the app’s functions.

AvNav is compatible with a variety of third-party ADS-B hardware interfaces. Current interfaces include the SkyRadar-DX, the Levil Technology iLevil receivers and the Dual XGPS170. AvNav EFB won’t overlay attitude or synthetic vision at this time, even if the receiver provides it.

A free trial of AVNav EFB can be downloaded on the Google Play store. Contact www.avnavefb.com.