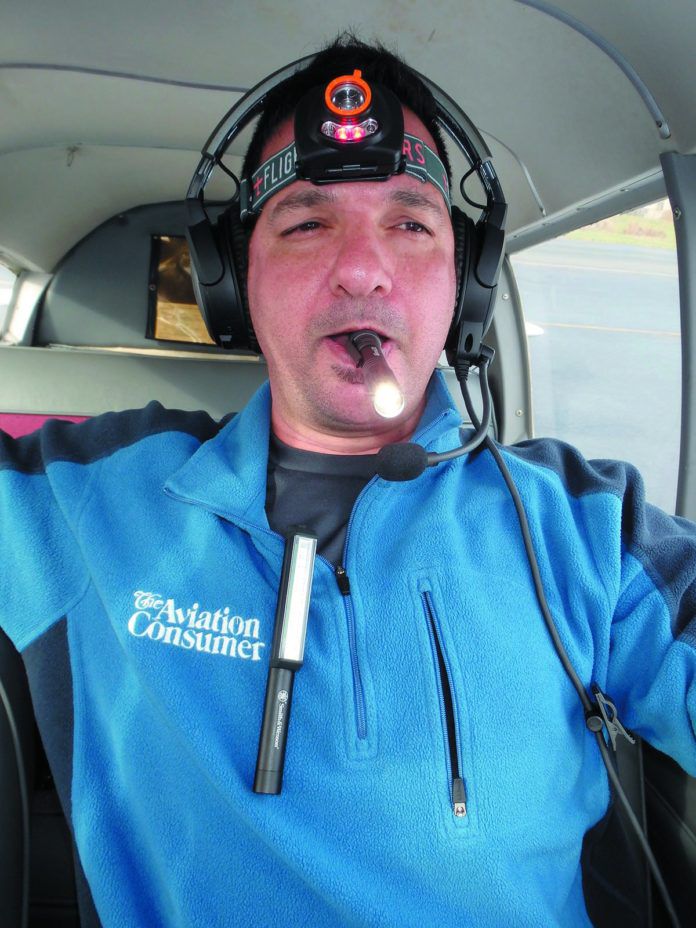 Unless you fly a lot at night, the handful of lights you have stashed in the flight bag, glove box and map pockets are used infrequently. That makes selecting a model with decent quality important. In our experience, some models that sit for long periods while subjected to heat, cold and humidity don’t work that one time they’re needed.

That’s not to say inexpensive models sourced from a local hardware store won’t do the job, and we realize you have a favorite flashlight we didn’t include here. We scanned the market and consulted with high-volume mail order retailers, including Sporty’s, to get a feel for the best sellers with the fewest returns. We also talked with mechanics (not a gentle crowd) to see which lights survive life outside the cockpit.

We selected eight diverse models priced well under $100 for comparison and shared them with local pilots. We made selections based on specific usage, including emergency, preflight and for general use inside of a dark cabin. We’ll continue to use them for a year to see how they hold up. For now, here’s a look at them.

As you’ll see in the sidebar on page 21, the illumination power of LED technology allows for a more conveniently sized flashlight. With the exception of the full-size Maglite, we looked for models under seven inches long because they are just easier to deal with in the cockpit. But we also found that penlights—unless tethered—might be too small. We had one roll between the seat and center console in a Cirrus one night and there was no way we were retrieving it without climbing in the back seat.

The other size consideration relates to battery type. Obviously, a light requiring larger D or even C cell batteries are going to have some girth. While the trade-off to pricier lithium cells is endurance, we prefer AAA or AA cells. Then there is the convenience factor of loading fresh batteries on the fly. One otherwise good light—the Coast PX20—didn’t make our cut because it requires removing a cylinder-like battery carrier to load three AAA cells. We fumbled horribly with it in the dark. As a result, we favor a simple do-it-by-feel, drop-’em-in design.

Firearms icon Smith&Wesson also makes flashlights, including the Captain’s model, which is made exclusively for and redesigned by Sporty’s to be pilot friendly (the original has blue lighting, but Sporty’s thinks it is too bright for cockpit use).

Carrying a lifetime warranty, the light is constructed of anodized aluminum and has independent switches for its dual-mode three LEDs and single-mode 10 white LEDs. What we like most is its intuitive and simple mode buttons, which can be operated by feel. We also like that you can operate the light on one single LED to preserve night vision. Powered by three AAA cells, we think it’s priced just right at $39.95 with an included belt holster, which accommodates spare batteries.

An airborne law enforcement pilot turned us on to the Streamlight Night Com. Eagleville, Pennsylvania-based Streamlight specializes in tactical lighting products, including gun-mounted models. The Night Com LED operates on two 123-series lithium cells, which can last up to 28 hours. We were initially fond of the Night Com for its high-quality feel (it has an anodized aluminum construction), which is a lot like the S&W Captain’s light, but in a smaller footprint. We also like that it has a “safety” mode, to guard against inadvertent power-up (it uses a rubber push-button tailcap on/off switch, which could inadvertently activate).

But we found the small rotary mode switch slightly awkward to use, especially while wearing gloves. The switch does have raised thumb guides for easier rotation, but we would prefer dedicated buttons like the S&W’s. At $59.95, the Night Com is pricier than the S&W, too.

It has four positions: Safety, NV LED for red night vision, Hi LED (which is red) and Light, which is 105 lumens of white LED light. The Night Com has Mil-Spec dark adaption, outputting less than 0.05 lumens in its night-vision mode.

We collected two LED Maglite flashlights, the $48 168-lumen full-sized D-cell and the 87 lumen AAA-cell Mini. We had great luck with incandescent Maglite models and an old Mini equipped with a red lens has lived in the flightbag for as long as we can remember (the Mini was introduced 25 years ago).

At 10 inches long, we think the full-size Mag can be bulky for stowing in smaller cockpits, but is nearly ideal for preflighting and working under the cowling. Ever lose a flashlight in the cowling? We did, requiring its complete removal to retrieve the light while passengers cooled their heels in the terminal. Consider size when selecting a model for preflight chores.

The Maglites are perhaps the most utilitarian models in the group, but in our view that’s a good thing. Both are drop- and water-resistant, have adjustable heads for spot and floodlight and the larger models have a basic, self-cleaning momentary switch.

If these lights are used less than once per month, Maglite suggests removing the batteries (not a bad idea for any model), plus lubricate all threads and the rubber O-rings with petroleum jelly twice per year.

An electrical failure at night will take down the panel lighting and have you reaching for a flashlight. Unless you have a copilot or back-seater to hold it, your mouth will have to do. With this in mind, we included a few lights capable of hands-free operation. The $29.95 Flight Outfitters Pilot’s Headlamp model is the easiest.

First, the headstrap is made of a comfortable elastic material much like you find on ski goggles. It’s thin enough to not interfere with a headset or eyeglasses. The light assembly has a vertical pivoting adjustment to compensate for seat height when illuminating instruments or a checklist, for example, while a multi-position focusing function allows the user to accurately adjust the size of the light beam from floodlight to spotlight.

The light has both 80-lumen white and two-lumen red LEDs, each having a high and low output function. We also like the separate push-button controls for the white and red lighting modes. This eliminates having to scroll through different light settings to find which one you want. The device is water resistant (useful for water ditching) and operates on three AAA batteries.

While initially optimistic, we were ultimately disappointed with the $24.95 Smith&Wesson work light—a 6.25-inch-long aluminum wand with a pen-like shirt clip and built-in magnet. Unfortunately, the magnet is attached to the 1.5-inch shirt clip and doesn’t hold the light’s weight in a horizontal position. If it did, you could attach it to metal structure on the underside of the glareshield and use it to illuminate instruments. Instead, it works best when clipped to a shirt, or for use as a reading light.

It has two red LEDs and seven white LEDs arranged in a narrow strip. Clicking the power button once illuminates one red LED, twice for both red LEDs and holding the button energizes the white LEDs. Our unit failed under vibration and we couldn’t source a replacement before going to press. We’ll continue to use the replacement in our long-term evaluation.

A penlight we did like was the $29.95 Terralux Lightstar 80. Measuring 5.5 inches long, it outputs 80 lumens and has a five-hour endurance with two AA batteries. Equipped with a rubber bite grip attached to the tail, it can serve double duty as a hands-free light without fear of busting a tooth when held in the mouth. Our only beef is that it lacks an integrated red LED.

One Size Won’t Fit All

Our thanks to Sporty’s for providing some of the samples for our evaluation. Unlike others, it actually uses the flashlights it sells. We think you should make a selection based on the task and should have at least two available (and for passenger use).

We think the best overall flashlight in this group is the Smith& Wesson Captain’s light. It has simple controls, effective output in all lighting modes, it’s not too big or too small and just feels good in the hand.

For working in and around the cowling during preflighting chores (and for maintenance tasks), we prefer the 10-inch LED Maglite. Our old incandescent model has stood the test of time and every mechanic we talked to owns one. For preflighting the fuselage, Sporty’s 100 LED mega light is certainly bright enough and nicely designed, in our view.

For $30, the hands-free Pilot’s Headlamp is the belt and suspender and can also serve for preflighting.

We’ll see how well these lights survive our abuse over the long term and report on the results. In the interim, if you have a favorite model, tell us about it.