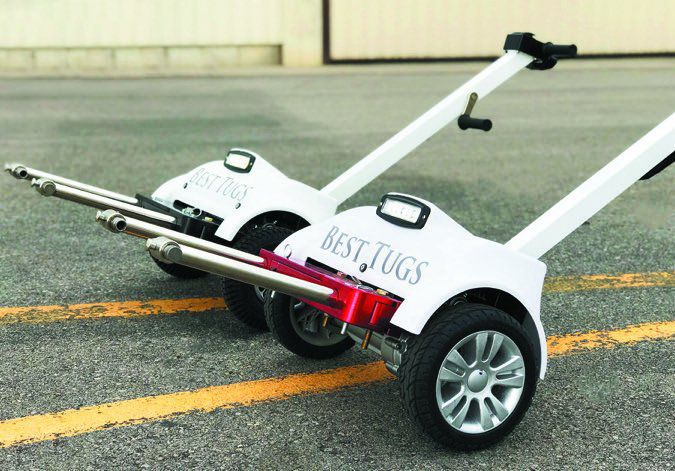 In our July issue we published a survey of some of the tugs on the market that are suitable for moving airplanes weighing less than 6000 pounds. We reported on 20 tugs put out by seven manufacturers and found that electric models had come to dominate the field. We somehow managed to overlook one manufacturer: Best Tugs (www.besttugs.com) of Spanish Fork, Utah. Best Tugs offers three sophisticated electric tugs that fall within our under-6000-pound area of interest.

While all tugs move airplanes, a Best Tugs unit has an onboard computer with software installed that optimizes the drive system for the type of airplane involved. According to Best Tugs’ Bryce Whittaker, the software is based on a combination of pull testing and mathematical modeling of the weight and landing gear geometry of specific types of airplanes so that the operator of the tug cannot cause the tug to damage the nosegear (or tailwheel) by accelerating or stopping too fast. The tug will simply refuse to apply more torque to the airplane than is safe for the gear. We note that tug-induced aircraft damage is a very real consideration—Cirrus Aircraft has issued a Service Advisory on the subject for the SR20 and SR22 line.

Should a pilot forget to unlock the parking brake, a Best Tug will hit the torque limit established by the installed software and shut down rather than potentially damage the nose/tail gear. In addition, should the operator be pressing on the throttle when turning the tug on, the software will command a reset rather than allow the tug to suddenly apply torque to the gear. Once the tug is in motion, the software runs an autothrottle function to maintain a constant speed.

When buying a tug, the customer identifies the type of airplane to be moved and Best Tugs supplies a tug with appropriate software installed as well as the correct “quick lock” forks that mate the tug to the nose or tailwheel of the airplane. If more than one type of airplane is to be moved, the software installed is for the more fragile of the airplanes and forks for each are provided. Fork swaps appear to require less than 20 seconds.

The Bravo line of Best Tugs was the first developed and handles larger airplanes—we looked only at the B5, which is rated for airplanes up to 5600 pounds. The base price is $5800. It is a two-wheel drive unit, with differential, and picks the nose or tailwheel off of the ground by attaching a fork designed for the type of airplane to the gear and then winching the wheel onto the tug. Best Tugs come with all-season tires—a company video shows a B5 moving a single-engine turboprop up a sloped ramp through several inches of slush while not slipping once it got onto a polished hangar floor.

The B5’s motor puts out 45 amps. The tug comes with a number of options, two of which we think are potentially very attractive to buyers because—when they are needed—they’re incredibly handy: an air compressor with hose ($345), and a built-in GPU ($945) with capability to jump-start the airplane (it includes the appropriate cable).

While Best Tugs are more expensive than their competition, we think that the built-in protection against gear damage may attract more than a few buyers.