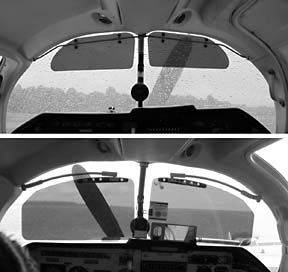 Its a toss-up whether the thousand-yard squint many pilots have comes from years contemplating Olympian vistas or just too many hours motoring toward the sun.

Unfortunately, blocking that sun also blocks the view of other aircraft. Commercial efforts to strike a happy medium between target acquisition and glare protection range from cheap slap-ons to pricey feats of engineering.

The former are the little shade doo-dads Sportys sells, the latter are the expensive mega-engineered aftermarket visors sold by Rosen Products LLC. In between are stock visors and a mid-priced aftermarket product sold by Ultravisor and designed as a direct replacement for the existing visor blades. Heres a quick glimpse at how these products compare.

Rosen is Tops
Rosen first hit the market with its aftermarket visors in 1980 and has since developed a line of products to fit nearly every popular general aviation aircraft. Perusing the product line, its clear that Rosens products occupy the high ground of aftermarket add-ons, with bizjets and turbine helicopters prominent on the STC list.

Rosen visors are exceptionally well-made, with high-impact polycarbonate blades and nicely machined and anodized aircraft aluminium hardware. They also carry a price tag to match. For our Cessna 182 test aircraft, a pair of new Rosens cost $240, some $100 more than the competing Ultravisor and many more times the cost of cheap slap on.

For that princely sum, you get a huge tinted blade and a nicely articulated arm that allows positioning the visor where it will do the most good. Most Rosen designs-variable with aircraft-use a sliding arm arrangement to position to blade laterally, thus extending its already generous coverage area.

Make sure you read the fine print before ordering a Rosen visor set. Rosens replace the entire bracket rather than just the visor blades. Some aircraft require rather extensive installation, including cutting holes in the posts and at least one model requires A&P intervention.

We compared the Rosen product with both the stock version (a Mooney) and with Ultravisors in a Cessna 182. In short, as shown in the photo at left, theres no comparison between the stock Mooney visor and the Rosen, in our view. The stock model is narrow and mounted on a flimsy arm that adjusts only in one plane. When the sun is low on the horizon, the stock visors are hopelessly too small.

The Rosen blade, on the other hand, is enormous and covers nearly the entire windscreen area. With a little nudging, it can be brought right down to the glareshield. The penalty to pay for this-other than cost-is that maneuvering the visor into position requires a deft touch and some head bobbing. That visor is way big.

Also, in the stored position, it blocks the overhead vents; on a hot day, youll have to fuss to strike a compromise between roasting and having the visor out of the way.

In general, Rosen visors are larger than the stock parts they replace and installation and stowed room vary by aircraft. In the handful of aircraft we have used Rosens in, weve found them to be a vast improvement over the OEM offering.

Ultravisor
The low-priced spread here is the Ultravisor, which bills itself as both cheaper and easier to install. We popped a pair onto our 182 and found installation to be almost as simple as the accompanying materials promised. The less disassembly needed to remove the old visor the better (and make sure you have a stubby screwdriver handy, just in case).

In our aircraft, a fabric-covered door post facing reduced clearance sufficiently that we were more comfortable taking the bracket off rather than just wiggling the old visors out. Even so, replacement was quick and simple and required only minimal tools and time.

Since the original brackets remained undisturbed, the new visors will move only in the same range as the old; basically one plane, but the stowed position. In the case of our 182, that left a relatively small unshaded triangle in the middle, top and bottom, an insignificant drawback in our view.

The only other negative noted was our partners dry observation that the new acrylic shades would give us something else to carp about acquiring fingerprints.

An unanticipated benefit of the Ultravisor was the distinct improvement in contrast through haze. Were not sure whether the smoke brown tint works as a blue blocker or the darker shade simply improved contrast, but the difference was quite noticeable and were happy to have it.

Ultravisors are available for most Cessnas and Beechcrafts, but only 1964 through 1971 Piper PA-28s and the 29-R180. Both Ultravisors website and Sportys sells them for $129.95. (Curiously, Sportys catalog shows only the Cessna and Piper models, while the online catalog offers all three.) The Aircraft Spruce online catalog prices them at $108.95. Rosens cost $250 to $280, variable with model year.

From our relatively brief comparison, we felt that Ultravisors brown tint did a significantly better job cutting haze than did the Rosens dark green. Balancing features, coverage, installation and cost, the Ultravisor is the better bang for the buck in our view, assuming yours is one of the STCd aircraft.

Slap Ons
So maybe your airplane isnt on the STCd list and the upgrade fund wont tolerate a pair of Rosens. In that case, Sportys sells some downmarket slap-on visors that will kill the glare effectively if not elegantly.

The so-called Slap-On sun visor is just what the name implies, a piece of tinted mylar that self-adheres to the aircraft windows or windshield. Weve carried one of these in the Mooney for several years and although its effective, how you store it is critical. Its shipped flat in a paper sleeve and ought to stay there when not in use and be kept as flat as possible. If it takes a set or wrinkles, it wont adhere to the glass as well.

But if flat, the Slap-On adheres to the aircraft glass well enough, including curved surfaces. For $4.50, you cant go wrong for this do-in-pinch visor.

Sportys also sells a pair of movable Lexan visors that attach via suction cups. One is a 4-inch diameter round shape ($7.95), the other a 6X12-inch rectangle for $14.95. We would rate these as so-so.

When not in use, they have to be stored, so for the most part, they wind up on the hatshelf or in the baggage compartment with all the other debris you cant understand why you bought.

These devices are best reserved for side window use, although theyll do on the flattest portion of the windshield. (The Slap-On works better on compound curved windshields.) Best deal overhaul is the Slap-On. Buy a couple and replace them occasionally and youll have all the glare protection you need.

-Jane Garvey and Paul Bertorelli contributed to this report.