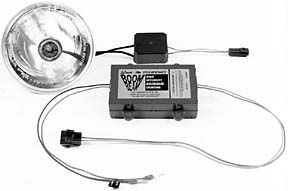 For the typical presbyopic middle-aged pilot, night flying can sometimes be as much fun as a root canal. Its not so much the flying or squinting at the eye-test type on an approach plate but avoiding disaster on the taxi to and from the runway.

Even landing at night is hardly an ordeal for most of us, at least on a well-lighted runway. Once off the runway, however, good luck finding and following the faded yellow lines, especially if you have a nose-mounted landing light burning dimly behind an age-yellowed plastic lens smeared with dirt.

Youd think, then, that the world cries out for a better class of landing light and youre probably right. But does it have to cost $1000? Roy LoPresti thinks so and that tidy sum-more or less-is whatll itll cost you to install one of his new Boom Beam landing lights thus far STCd for the Mooney, with more models planned.

So what do you get if you drop a grand on a landing light? Claims LoPresti Speed Merchants, the light delivers five times the candlepower of a conventional reflector-type landing light making night landings a new experience. Having installed one in our own Mooney 201, well go along with the latter claim. It is a new experience. But were not convinced its always better.

The Boom Beam is a high intensity discharge system, technology used for a number of years in off-road racing vehicles. If youve seen photos of a Baja buggy rigged for night running, theres usually a row of these lamps on the roof of the vehicle or bolted to the roll bar. (Thats a couple thousand bucks worth of lighting, in case youre wondering.)

HID works a bit like the old carbon arc searchlight, in that theres a bulb-really a gas-filled tube-but no filament. A pair of electrodes apply high voltage to metal salts between the electrodes, striking an arc that emits a bright light . HID uses less energy than a conventional bulb and thus generates less heat on a light-output basis. The lamps color temperature is closer to the white of daylight than to the cooler yellow of the typical incandescent light. Theoretically, that makes colors truer to the eye at night.

As far as we can tell, the energy use and heat claim stands correct. The Boom Beam we installed draws about 3 amps versus 8 or more amps for the conventional reflector bulb it replaced. Moreover, it burns much cooler. To test this, we used an infrared thermometer on both the Boom Beam and a conventional Mooney landing light.

Installation
The Boom Beams base price for the Mooney is $699, plus $135 for an installation kit, totaling $834. Other models-specifically the Bonanza-have more complex installation requirements and the hardware alone will cost about $1000. Installing the Boom Beam is not quite a bolt-up, but almost. Since it requires a high voltage and a strike pulse, the Boom Beam has a ballast-housed in a plastic box-and a starter. The installation kit, which is complete and well-illustrated, includes some cement to bond four studs to the firewall.

Aircraft voltage is then wired into the ballast from the existing landing circuit and the Boom Beams high voltage is carried to the xenon bulb. In the Mooney, the bulb is direct replacement for the stock reflector bulb.

Although it looks like a sealed beam unit, its actually a two-piece affair, with the bulb sliding into the reflector assembly from the rear. A starter is permanently wired inline between the ballast and bulb and its bonded to the landing light housing. We would budget three hours of shop time for installation in the Mooney, although this is likely to vary from aircraft to aircraft. LoPresti plans to STC the Boom Beam for a wide range of models. If it will fit in the Mooney, it ought to fit in just about any popular aircraft.

Performance
Bottom line: Does the thing work? Yes, but not that well, in our view. Having spent this kind of money on a landing light, we were a bit disappointed with its performance on a couple of counts. When you turn it on, it flickers once, just like a fluorescent tube and then takes perhaps two seconds to warm up to full brightness. No problem there; the landing light is always flipped on well before its needed. The lights color is hot white with a slight bluish cast.

This thing has awesome range. When we flipped it on the first time, it was aimed a tad high and illuminated a set of hangars on the other side of the airport. The beam is tightly focused and much more coherent than a conventional landing light. While that sounds good, its not necessarily so.

The beam is so coherent that aiming it is critical. We removed the lower cowl and adjusted the beam downward. But where should it point? Even at 50 to 75 feet in front of the airplane, the Boom Beam projects a hot spot of light only three to five feet in diameter; fine for zeroing in a yellow taxi line if you know roughly where it is but of no help in exploring the dark corners of the airport when youre clueless about where the taxiway centerline is.

Similarly, when approaching a poorly marked taxiway at night, the Boom Beams forward-focused spot doesnt shed enough light to the sides to help locate and illuminate the edges of the pavement or the centerline.

Thats okay if you keep a nicely painted yellow line centered up in the beam but lose sight of it and its like looking at the world through a cardboard tube. And which airport has a nicely painted yellow centerline? We also noticed that the Boom Beam is sensitive to slight shifts in the bulb mounting mechanism, which consists of a metal ring and three spring-loaded aiming screws. As the reflector vibrates in the mount, the aiming changes ever so slightly and we found this to be noticeable, thanks to the Boom Beams laser-like coherency. The stock reflector light has a wider beam and although its range is a fraction of the Boom Beams, it spills light out the sides, which is useful for taxiing.

When we mentioned this to Curt LoPresti, he sent us a reflector with a wider flood beam rather than the spot beam being offered. Did it help? Yes, noticeably, although it reduces the Boom Beams impressive range.In our view, the flood beam delivers performance comparable to or a b it better than the stock landing light.

That reflector isnt yet STCd, so we recommend discussing this issue with LoPresti before buying the system. Installing a spot or flood reflector may be a matter of personal preference. Well stick with the flood, thanks.

If you operate out of poorly lighted or turf strips at night, this capability might be desirable. But its of marginal use on a well-lighted runway, in our view. Again, the beam is so focused that aiming it requires deft use of rudder; if youre slipping the airplane, look for the beam somewhere in the grassy infield or on the roofs of nearby hangars.

We also flew the airplane around the pattern during the day, observing the brightness of the Boom Beam for traffic avoidance purposes. From the shallow angles straight on, the beam is bright-almost painfully so. Youd have to be blind to miss it. But closer in or at relatively high angles to the beams aimed direction, it doesnt appear any brighter to us than a conventional landing light.

Lasts Forever
Off setting the high cost of HID technology is its robustness. Since theres no filament and the bulb runs cool, LoPresti says it should last for many hours-as in 5000 hours, not the 20 hours of a conventional bulb.

The bulb itself has a five-year warranty which, if the claims pan out, is probably longer than many owners keep one airplane. Could we be talking about a lifetime bulb here? Well let you know in a couple of years. In any case, bulb replacement is reasonable: About $85, which is not too much more than the most expensive conventional bulbs.

From our point of view, longevity may be the Boom Beams primary advantage in the Mooney. The conventional bulb burns out several times a year, always at the most inconvenient time. Frankly, its a pain in the butt to change it.

On that count alone, the Boom Beam may eventually pay for itself. If it does, well deem it worth the investment. But for short term performance, were not sure the Boom Beam delivers $1000 worth of improved lighting, at least in our Mooney. That might change aircraft to aircraft, however.

If a Boom Beam appeals to you, be sure to discuss the reflector issue with LoPresti Speed Merchants before buying.