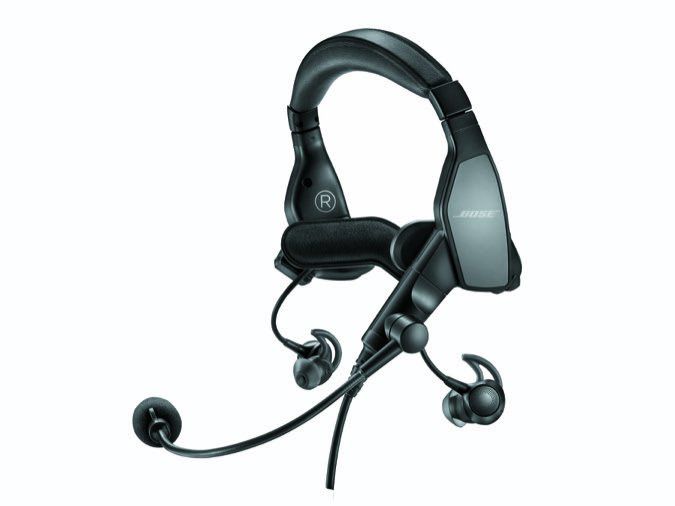 Bose specifically pointed the ProFlight in-ear ANR headset at the jet market-airliners and bizjets-when it released the product last year. As expected, the set attracted buyers flying turboprops and even quiet pistons, where the ProFlight simply doesn’t work well, nor was it intended to.

But overall the headset is getting favorable feedback from the jet crowd, if not without some nits to pick when it comes to feature set and ANR performance. Bose is listening, proven by its just announced Series II ProFlight. Here’s a once-over.

It’s in The Cabling

As with most ANR models, the set’s downcable-that’s the plug-in harness that houses the control module, audio cable and microphone, which plugs into the set’s chassis-has been replaced with a thinner and more flexible cable. Swapping out the downcable is also how owners of first-gen ProFlights will upgrade to the Series II.

Bose shaved a bit of weight from the new Series II, weighing in at 4.5 ounces. The first-gen set weighed 4.9 ounces. This isn’t substantial, but on a headset any weight savings in welcomed.

Even after the improvements, the ProFlight Series II is still intended for jet ops. For our flight trial in the January 2019 Aviation Consumer we evaluated the headset in a new Cirrus, a Pilatus PC-12NG, Quest Kodiak Cessna 206 and Citation Mustang. As expected, it worked well in the Citation, but not so well in the turboprops for taming noise.

One otherwise clever feature that’s been dinged by some users is the ANR circuit’s tap control. Double-tapping a finger on either one of the earbuds puts the set in a talk-through mode, which works when the headset is in the medium or high noise-canceling profile. The idea is to enable better communications outside of the headset. Maybe it’s for talking with a flight attendant, gate agent or passengers, but the talk-through feature means you don’t have to take the buds out of the ear to talk with someone off the intercom. We’ve heard of (and experienced) some situations where the tap-through is activated uncommanded during landing and even on the takeoff roll on bumpy runways. Bose said the Series II has been tweaked so the mode is more accurate and more responsive.

Bose added winglets on the set’s microphone boom for better alignment. It also made some improvements to the set’s Bluetooth circuitry for better audio response.

Bose said some airline crews have been requesting a version of the ProFlight that doesn’t have a wireless Bluetooth interface, presumably because of the airline’s ops specs. As a result, the company will offer the ProFlight Series 2 in a version without Bluetooth, and it changed the design of the set’s storage case (for quicker storage and easier transport)-another change made at the request of some airline crews after using the headset on the line.

Additionally, there will be an option for custom-molded ear tips provided by Bose partner Avery Sound.

Bose said the FAA TSO’d Series II model will be available this September for $995, and existing ProFlight owners will get a price discount for upgrading to the new downcable.