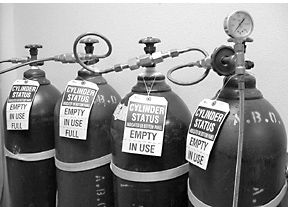 Given the consequences of hypoxia-from minor nuisance symptoms to impaired judgment that can result in an accident-we can all agree that having oxygen available in the airplane is a good idea.

As weve noted in our ongoing series on supplemental oxygen, its use by pilots is increasing, thanks to competition in the oxygen system field and the advent of relatively cheap pulse oximeters to keep accurate track of blood oxygenation.

We suspect more pilots would use oxygen if recharging the systems werent so expensive. And frankly, it doesnt have to be costly. Yet enduring myths concerning aviators breathing oxygen (ABO) tend to cloud the subject in an aura of mystery that causes few buyers to question how much the stuff costs.

In this report, well try again to dispel some of the common myths about ABO and explain how you can save a lot of money if you use oxygen regularly.

Myth #1: ABO is Different
This is probably the most common misconception about ABO and includes the incorrect notions that its drier than medical oxygen or welders oxygen, its cleaner and its made by ATP-qualified elves in the Black Forest.

All such oxygen is produced by the same distillation process, in the same plant and with the same equipment to the same specification. Its shipped in liquid form to major distribution centers. There are no separate tank cars or trucks for ABO.

It all comes out the same port; it just goes into different (often identical) cylinders with different labels. The only difference is the paperwork, the distribution system-and the cost. The purity requirements for industrial and welding oxygen today are actually more stringent than the old mil-spec for ABO.

Decades ago, there were differences because the methods of production differed; today there are none. Still dont believe us? Go to a gas production plant and watch. If that doesnt convince you, you probably still believe the world is flat.

Myth #2: FARs Require ABO
Wrong. Theres no FAR that requires you to use ABO. The only place the FAA says anything on the subject is in some venerable (and outdated in many respects) Advisory Circulars. AC 43.13-1A (Acceptable Methods, Techniques, and Practices – Aircraft Inspection and Repair) lists a maximum moisture content specification for ABO.

All oxygen currently produced exceeds this specification by a mile. Its absolutely dry by virtue of how its produced (distillation) and distributed (as a liquid). Death Valley is a rain forest by comparison.

Those who claim medical oxygen is different because it has more moisture so it doesnt dry out patients pulmonary systems havent been to a hospital in the past few decades. They bubble the oxygen through water to moisturize it because its so dry. So, theres no water to freeze up your aircrafts oxygen delivery system, portable or otherwise, as some mistakenly believe.

For portable, non-TSOd oxygen systems, even this recommendation (remember, the A in AC stands for advisory) isnt applicable. However, the real point is to again look at the reality of Myth #1; theres no difference between oxygen, so by default, its equivalent. And, in any case, all oxygen made today is far superior to that antiquated specification.

Myth #3: No ChapStick
This one simply will not die. The theory is that you cant use ChapStick or lipstick when using an oxygen mask because the oil in them will cause it to spontaneously ignite in the presence of pure oxygen. No doubt thats why so many emergency medical patients have ended up with burned lips, the EMTs didnt wipe off the lipstick-not.

While you do have to be very careful about introducing oil into the oxygen refill and delivery system because of the dangers of combining high-pressure oxygen and oil and the potential for rapid and significant temperature rises that could cause spontaneous combustion, by the time it gets to your lips, it isnt an issue. The guy filling and handling oxygen bottles needs to worry about this, you dont.

Myth #4: Only FBOs Can Fill Cylinders
Ding! Wrong again. Aside from ignorance on the part of others, or perhaps an unusual local ordinance or restriction that would prevent you from keeping a cylinder of welders oxygen in your garage or hangar, theres no federal regulation that prevents you from refilling your own oxygen cylinder. And the cost savings can be substantial if you use oxygen regularly.

Its also worth noting that medical oxygen providers can also provide a lower-cost solution compared to an FBO. Not that were knocking FBOs here; they have to make a buck too and if you badly need oxygen, you expect the FBO to have it. Expect to pay for the convenience.

But if you only use oxygen a couple of times a year, a medical source will be cheaper. Typically, youll need a prescription from a cooperative doctor. But with that in hand, getting a refill at reasonable rates should be relatively easy.

Often, however, youll have to leave your cylinder and pick it up a few days later. Many locations dont actually do the fills there, the cylinders are shipped off to a central location. When youre simply exchanging cylinders, thats not an issue, but the medical fittings are different than aviation fittings and youll want your own cylinder back.

As an aside, you really shouldnt even require the prescription, since the oxygen isnt being used for medical purposes. But having one may be easier than arguing the regulations with an ill-informed employee behind the counter. A call ahead and a conversation with a manager may be all thats needed in many cases.

Some pilots have told us that it may also be easier if you take the aviation label off the cylinder. Again, sometimes its easier to circumvent ignorance than to deal with it straight on.

Fill Your Own
The oxygen systems we tested last year (see Aviation Consumer, August 2001) were all filled from a tank of welders oxygen that cost only $25 and left us with oxygen to spare. In many places it costs even less. Were we to do this for our own extended use, wed invest in a pair of tanks to use as a cascade system, a simpler version of the multiple tank set-up an FBO uses. Compare that to the $50, $60 or even more that an FBO charges for each fill and you can see how the economics are so favorable for frequent use.

Most pilots who fill their own purchase the large cylinders and then just pay for the refill, exchanging tanks as needed. Many oxygen sources will deliver and exchange the cylinder at your location, for a small extra delivery and pick-up charge.

Besides the oxygen, youll need a transfiller to get the oxygen from the big cylinders to your small cylinder. At its simplest, this is just a high-pressure hose with fittings at both ends. We tested two transfillers from Mountain High Equipment & Supply (they offer a range of five with various features) and one from Aerox Aviation Oxygen Systems.

The MHE&S model TR55 ($75) is simply an 18-inch long high-pressure hose with a nut and nipple with O-ring at one end (to fit the master filling cylinder) and a hand nut and bare nipple at the other. You rely upon your oxygen cylinders pressure gauge and some oxygen is lost when you detach the hand nut from your cylinder.

The TR95a ($275) has a four-foot hose equipped with a large pressure gauge at the charging cylinder end so its easy to tell how much oxygen remains in your cylinder. Both nipples are O-ring sealed. The other end has a bleed valve just above the hand nut, so only a minute amount of oxygen is lost when disconnecting the line from your cylinder.

We liked the ability to complete the fill process without getting a wrench out. However, the transfillers come with spare O-rings, because failure to depressurize the hose properly will blow the ring. It seems that most users do it at least once before they learn the lesson.

The Aerox FA-EZ ($178) is equipped with a five-foot hose and a small pressure gauge at the charging cylinder end. Theres no bleed valve. Both ends have bare nipples and require a wrench to tighten and loosen. Aerox places a restrictor in the line to slow fill rates, reportedly as a safety measure. Were not convinced thats necessary, but their lawyers probably sleep better. We found that the pressure gauge read about 75 PSI low when we double-checked our reading with the oxygen suppliers calibrated gauge upon return of our cylinder.

All the transfillers come with instructions and with a cautionary tag attached. We liked the MHE&S tag for its clear instructions with drawings and felt the laminated sheet would better stand up to abuse.

If the cost of oxygen keeps you from using it much, we strongly suggest looking into self-filling. For well under $200 a year-perhaps even including the cost of the hardware-you can have oxygen available on every flight, a real boon to safety, in our view.