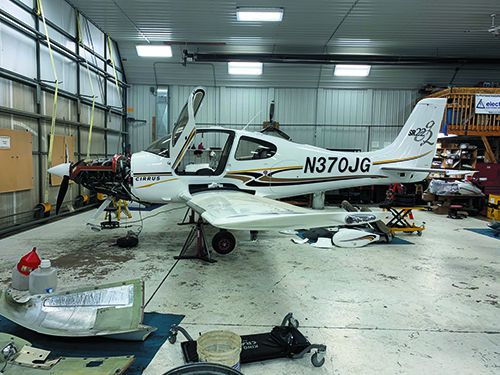 If you fly a G1 or G2 Cirrus you might have considered upgrading the OEM mechanical fuel quantity gauge with the Aerospace Logic FL202G digital “smart gauge” control head, along with the CiES digital magnetoresistive fuel senders. That’s just what we did back in 2014 for an Aviation Consumer field report.

But as we described in the November 2014 issue of the magazine, the upgrade in our 2002 SR22 G1 testbed yielded disappointing results—so much so that we ultimately removed the digital setup and had the OEM system reinstalled. The installation cost $5200 (CiES ultimately refunded the investment) and the plane was down for approximately one week. CiES stopped shipping the kit for G1/G2 models while it worked on a fix. Apparently persistence pays off because CiES says it found the problem and has a fix.

Worth mentioning is that CiES digital senders have been widely successful in other aftermarket and OEM applications, including G3 and newer Cirrus models. What’s the difference in the old SR22?

The early Cirrus models are unique because they have two fuel senders in each wing, including one that’s installed in a small collector tank. That collector tank is a walled semi-section of the tank on the far inboard section of the wing. It holds approximately 3 gallons of fuel. The collector is supposed to keep fuel from unporting in maneuvering flight, including critical phases like during climbout and landing.

According to CiES President Scott Philiben, this small tank, combined with the small lines to feed it—and the manner in which Cirrus chose to vent the tank—caused a series of issues, which unfortunately a more accurate (digital) sensor revealed. One issue is suction depression in the collector tank, due to the small feeder lines that originate in the main tanks. This was rectified in the G3 models and beyond.

The other issue CiES found is that the design of the vent system tended to trap an air pocket in the collector tank. This pocket of air expanded at altitude as the vent system didn’t allow the slightly pressurized air to escape the vent system. “To say that this combination caused an active and dynamic effect on the inboard sender would be an understatement,” Philiben told us.

Over the course of several years CiES tried a variety of fixes, including software patches, revising fuel line fittings and relocating fuel vents. These bandages did stem the flow (which ultimately included relocating the inboard sender into the main tank), but only addressed some of the issues found with the retrofit. Philiben wouldn’t settle for performance that’s any less than what you get in new Cirrus models. If you’ve flown one you appreciate the accuracy.

Since the design of the early Cirrus aircraft included a hard point on the inner fuel tank rib, moving the sender to the main tank is relatively straightforward and apparently solved the issue.

A huge part of the digital retrofit is a tedious system calibration process. Philiben shared with us the calibration curve results, which show a highly uniform pattern across the fuel quantity measuring spectrum. Flight testing revealed better results.

“One obvious characteristic that showed a fix was the immediate drop in fuel level when switching tanks, caused by the suction depressing in the tank or conversely in the prior tank being relieved,” Philiben reported. The net result is highly accurate fuel indications in these early Cirrus models, finally.

As we’ve suggested in the past, there’s good reason to consider replacing non-digital fuel senders with digital ones, and early Cirrus models are candidates. To appreciate the accuracy that a digital fuel sender can provide is to understand the shortcomings of the average mechanical float-style sender, which in many applications were born from typical automotive senders. Automotive resistance-type ceramic sensors that are reconfigured for use in aircraft often fall short in performance due to the large quantity of fuel that’s stored in an aircraft fuel tank.

A signature trait is the fluctuation in displayed fuel quantity as the sender’s resistance wiper moves.  And yes, the old saw that says these analog fuel measuring systems are the most accurate when the tanks are completely full and completely empty is true because many are calibrated for the full and empty positions.

The CiES digital sensor is magnetoresistive or specifically, AMR (for anisotropic magnetoresistive). This magnetic fuel sensor is proven to work well in a variety of temperatures and conditions that aircraft fuel tanks are exposed to, including the extreme sloshing of fuel within the tank (especially in turbulence). It’s compatible with alternative fuels.

The AMR sensor operates on the scientific theory that the electrical resistance of ferromagnetic alloys are influenced by external magnetic fields. The best and simplest explanation is that the fuel sensor acts like a compass, always pointing to the measuring float no matter how you move. There are no wires or traces of resistance inside of the fuel tank. Instead, the CiES sensor utilizes a magnetic pickoff located on the float arm, which is detected by the non-contact sensor on the outside of the tank.

And like most things with a digital databus, the digital fuel sensors (which convert the changes in fuel quantity to a digital signal) have multiple interfacing advantages. Computed fuel level is transmitted through a simple digital databus, cleanly transferring multiple pieces of fuel level data to a multifunction display. In this interface, the display is the Aerospace Logics FL202G—a gauge that fits in place of the mechanical gauge in the center console of the Cirrus.

The FL202G display is STC-approved as a primary gauge, and has a 65,535-color LCD display that works well when splashed with sun and has a wide viewing angle. There are two buttons on the bezel. The top button advances between display screens, selects an action from a menu and is used for programming. The bottom button is used to select the measured quantity in the left or right fuel tank. The default screen displays the quantity level for each tank in a color vertical bar format, plus a numerical value below the bar.

We like the fuel imbalance warning, which is a flashing yellow bar on either tank designation indicating a fuel imbalance condition. The flashing tank indication will be that of the tank with the most fuel. In the SR22, a 10-gallon imbalance will trigger the alert.

CiES is currently updating its STC list to include the early Cirrus models, and some other models too, including a variety of amphibs.

A CiES/Aerospace Logic upgrade won’t be insignificant, but we think the latest fix for early-gen Cirrus models will be worth it for some.