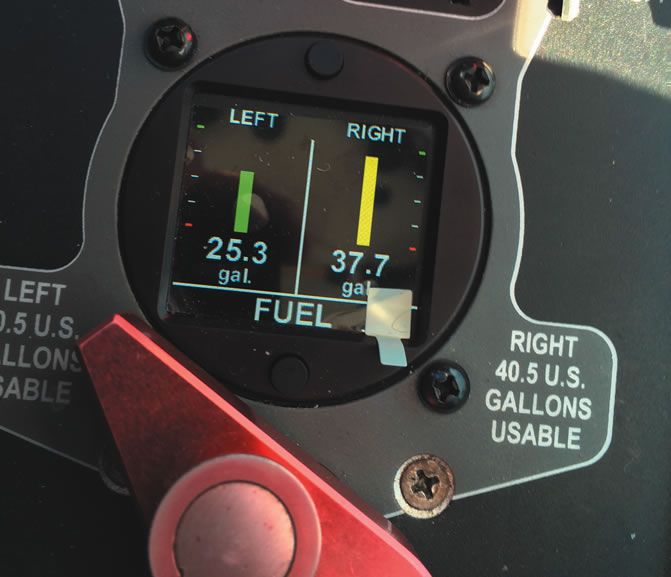 Last winter we reported on the CIES digital fuel sender retrofit for earlier Cirrus models. To recap, the modification is intended to better the accuracy of the original analog float-type fuel quantity senders used in first and second generation SR20 and SR22 aircraft.

The retrofit includes replacing all four of the existing fuel sensors with the CIES digital magnetoresistive sensors, in addition to replacing the stock analog fuel quantity gauge with the FL202G digital control head made by Aerospace Logic. It’s a so-called “smart gauge” that indicates fuel quantity both numerically and graphically, in addition to warning of fuel imbalance situations, should you forget to switch tanks.

Our evaluation was based on the retrofit of a 2002 first-generation SR22. The installation cost $5200 and the plane was down for approximately one week.

As we reported in the March 2014 issue of Aviation Consumer, we found the system worked as advertised, with an approximate discrepancy of around 1.7 gallons total. But over the course of approximately six months, the system became grossly inaccurate, sometimes off by 15 gallons or more, while often displaying accurately when the aircraft was on the ground. CIES arranged for replacement of all the components and a complete recalibration of the system, but there was little if any improvement in performance. Recently, owners of other modified earlier-gen Cirrus models have reported similar problems, while some report favorable performance.

What’s going on?
CIES president and system designer Scott Philben is wondering the same thing, although he’s aware of anomalies. “Cirrus G1 and G2 applications are a mixed bag for us. These aircraft are unique because they have two fuel senders in each wing, including one that’s installed in a small collector tank. This makes proper calibration difficult,” he said. That collector tank is a walled, semi-section of the tank on the far inboard section of the wing. It holds approximately 2 gallons of fuel. The collector is supposed to house non-sloshing fuel, since it’s always full. It’s assumed that Cirrus mounted the sender in the collector tank to measure the last remaining amount of fuel so the gauge shows zero when there’s no fuel remaining. Philiben says there’s a slight measuring dead zone—and inaccuracy—that’s inherent with G1 and G2 models, but G3 and later aircraft have revised sender mounting locations. (CIES provides the sender kit to Cirrus Aircraft and fuel gauge accuracy as displayed on the Garmin Perspective avionics is known to be highly accurate.)

The CIES STC is limited to using the existing fuel sender mounting locations, and modifying the fuel tank structure to mount the senders in a better location would simply make the installation cost-prohibitive.

CIES is evaluating a Cirrus wing and fuel tank in hopes of gaining better performance. It’s also exploring the possibility of a power supply issue that’s causing gross inaccuracies in some applications, including the one we’ve been flying with.

Until then, CIES has stopped shipping retrofit kits and the system is being removed from our evaluation aircraft. CIES has also agreed to refund the cost of the install. We’ll continue to report on any changes in status as they unfold. CIES said that Cirrus wants to offer the mod for earlier models.