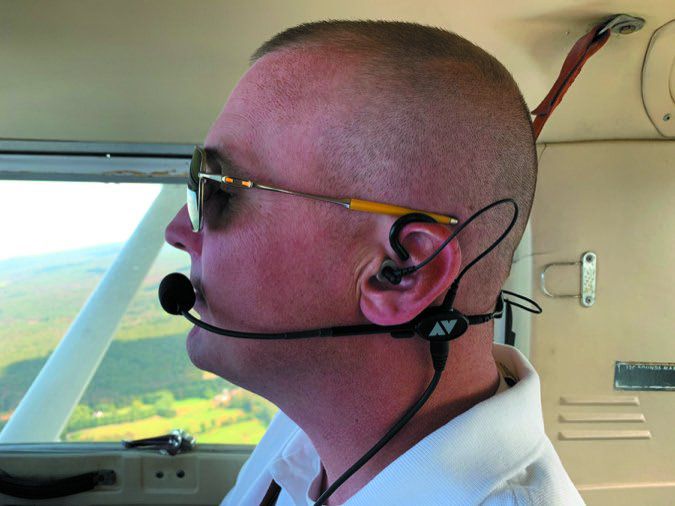 These days we’ve mostly moved beyond passive headsets in favor of ANR models for all but the quietest cabins-including jets and turboprops. But as a worthy alternative, ITE (in the ear) passive models can offer noise-canceling performance that’s on par with flagship circumaural ANR headsets, less the noggin-clamping pressure of even the lightest sets.

While an in-ear headset isn’t for everyone, among other in-ear models a favorite in our field reporting is the Clarity Aloft line from Aloft Technologies. Moreover, we have an early-gen Clarity Aloft in the flight bag and it’s proven itself such that in some cabins it’s the only set we’d reach for over the Bose A20.

That’s why we were anxious to get the company’s latest and lightest $775 TSO’d (TSO makes it an approved accessory for airline flying jobs) Clarity Aloft Flex model in in the ears to see if it’s worth the major price delta over Aloft’s entry-level Classic model. Here’s what we found.

Minnesota-based Aloft Technologies has offered the Clarity Aloft line since 2004 so there’s been plenty of time to improve the overall design. There are currently four models in the lineup including the Classic, the Bluetooth-equipped Link, the Pro Plus and the latest Flex.

One important trait we’ve always favored is the Clarity’s durable build quality. Remember, the idea of an ITE model is to make the wearing experience a minimalist one. It’s all about freedom from the intrusive nature of circumaural or even supra-aural designs. But to succeed the set has to be lightweight, yet durable enough to survive the abuse a typical pilot asks of them. Bend them, sit on them, step on them and drop them. And those thin wires-they’re asking to break. We’ve tried all of the above and still can’t break the Clarity.

The set is worn over the ears and the securing band rests behind the head. But unlike the other models in the Clarity line, which use a stainless steel headframe, the Flex has an adjustable flexible band that just to us simply feels less intrusive than the metal band. It also makes the set feel lighter on the head, and it is. The weight on the head is 1.35 ounces, compared to 1.5 ounces for the non-flexible models.

Tweaking the fit is easy. Simply tighten or loosen the strap, which is worn on the bottom of the head, until it’s secure. Some hair, no hair and long hair-everyone who wore the set noted that the Flex was comfortable without any pressure points on the head or tugging at the hair.

The ear hooks can be a point of pressure, especially with some larger eyeglass temples, but it’s acceptable, based on our trials.

All of the models are lab spec’d to provide between 29 to 47 dB of noise reduction. That’s traditional ANR headset territory, but this performance is also highly dependent on getting the right fitting Clarity Comply canal tip foam earbuds. Clarity includes a tin of six pairs, which includes 12 medium (the most common size) and two each large and small buds. A pack of 12 (six pairs) replacement earbuds is $25. For some, the best performance might come with a different size bud in each ear. For many, the medium tips work well.

The drill here is to roll and squeeze the bud as small as you can get it, stick it in the ear canal and let the bud expand. Do it right, and get the right size bud, and the audio performance is quite good.

One nit we had while using the Flex is that the buds would frequently come off the small speakers. It’s an easy attachment process-screw the bud onto the speaker-but while handling the set in the cockpit we found ourselves hunting for buds that came off. Good thing there are spares-we lost several to the dark hole that exists between the cabin seats. One user tugged a bit too hard on the speaker wire and the bud separated while in the ear canal. When using the small buds, this might be challenging to get the buds out of the ear.

The audio performance is excellent, which sort of makes sense because the tiny speakers are well-positioned right in the ear canal. The set uses an dual electret microphone that provides excellent, crisp modulation.

We like that the microphone can be worn on either side of the set-something that can’t be done with the other Clarity models. It’s an easy swap, too.

The control module on the Flex is minimal and includes a rotary volume knob that’s accurate and has a solid, high-quality feel. There’s also a stereo/mono slide switch. If the aircraft is equipped with stereo audio jacks you’ll get true stereo separation in each ear. Set it to stereo when plugged into mono jacks and you’ll only get audio from one ear. There’s also a balance control potentiometer on the module for tweaking more or less volume in each ear. Most won’t use it, but we like the flexibility, especially for those with hearing loss.

As for entertainment input, it’s a wired interface-no Bluetooth. Frankly, these days we think buyers might expect a set priced at $775 to have Bluetooth as standard but the Flex doesn’t. Instead, plug a stereo patch cable into the entertainment input jack on the control module for piping in your tunes. And those tunes sure sound good through those small speakers-better than some non-aviation earbuds. But there’s no auto-muting of the music when there’s radio chatter. These days we expect it because it’s been the standard function in aircraft audio entertainment input for years-both on audio panels and on headsets with a music input feature. Bose takes this function to high levels in its A20 and on its ProFlight in-ear set.

For Bluetooth you’ll have to buy Clarity’s Link model. We reviewed the Link in our last in-ear headset roundup for the December 2017 Aviation Consumer and it performed well and had a good fit and finish. But we dinged it for having two controllers-the set’s primary module for controlling volume and also the Clarity BluLink Bluetooth module, which attaches to (and is removable from) the set’s downcable.

Nflightmic: Roll Your Own Anr

Always looking for creative ways to increase comfort-and save some dough-we decided to try an interesting product from a company called NFlight Technology. The company makes the NFlightCam line of aviation camera accessories and also sells the attachable NFlightMic noise-canceling electret aviation microphone. It’s pretty creative and turns any noise-canceling headphone that has a 2.5-mm wired audio input jack into an aviation headset by attaching the microphone to the headphone earcup with a 3M Dual Lock attachment. It wasn’t the first with this idea but it says it’s the only company to offer a universal microphone that’s compatible with a wide range of sets, including Bose. A 3.5-mm adapter is available for some Sony models.

We tried the Nomad (Pro Version, with volume control), priced at $299.99, on a Bose QC25 (used for around $150) noise-canceling headphone. This is one consumer model you might use as an airline passenger, and it’s generally a good performer. The Classic microphone, priced at $249.95, doesn’t have entertainment input and a volume control.

We tried the setup side-by-side with a Bose A20 (and the Clarity Flex) and found performance to be quite good. Not as good as the Bose A20 as far as noise cancellation, but we couldn’t tell much difference between the mic audio performance among sets. A $50 Bluetooth module is available and plugs into the set’s input jack. That’s more bulk than we like in the cockpit, but it works for passengers who want tunes on the fly. Visit www.nflightmic.com.

We like the Flex better than any other Clarity model simply because the flexible headband is better than the metal one, and the set is lighter on the head. We also like that you can swap the position of the microphone. If we had to ding the set it would be because it doesn’t have Bluetooth. Since we fly with music, it’s a deal-breaker, but for others, it might not matter. Visit www.clarityaloft.com.