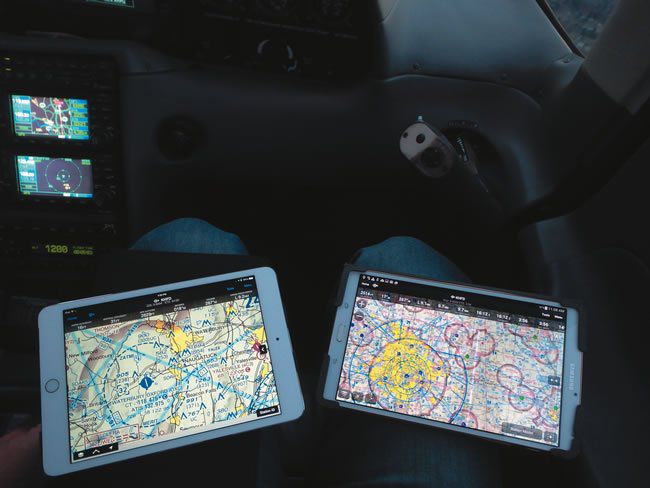 With increasing disenchantment with Apples market dominance and high-cost accessories, some pilots have been asking the $500 question: Is Samsungs mid-sized Galaxy Tab S 8.4 good enough to ditch the iPad once and for all?

In evaluating new navigation apps for Android we were impressed with the Galaxy tablet, and the more we used it in a variety of cockpits, the more we preferred it over the original iPad mini.

The smaller Galaxy tablet (a step down from the 10-inch model) stands out for its impressive screen quality, decent battery life and convenient size for tossing around the cockpit. There is also the Google Nexus 7. We evaluated it in the June 2014 issue of Aviation Consumer for its utility as a second display when slaved to the iPad.

To find out, we put Apples newest mid-sized table, the mini 3, head-to-head with Samsungs Tab S 8.4. For a fair comparison, we evaluated both devices running Garmins Pilot navigation app, one of the few programs compatible with both operating systems. Plus, a single subscription can be shared among them. Both devices were evaluated in the cockpit of a Cirrus and a Piper Cherokee during the day and at night. To get a true read on display quality, we used the tablets with and without antiglare screen covers and tried them with mounting hardware.

Form, display factor
Well talk first about the dominant iPad. Despite the larger screen, we gave up on the full-size iPad and other 10-inch tablets for cockpit duty years ago because managing them proved awkward. Moreover, the larger iPad doesnt work well for yoke mounting and can be bulky even when knee mounting. If you mount it to a window with a suction mount or to the glareshield (a practice we discourage due to flail safety issues), it could obstruct the view outside. If you have to mount it, we think its a better alternative to the larger iPad. It measures 5.3 inches wide, 7.87 inches high and is 0.29 inches thick, weighing 11.68 ounces.

Of course, the smaller form factor means youll sacrifice screen area, which is 6.4 by 4.74 inches. That can be problematic for aging eyes, especially when viewing approach plates and deciphering textual weather and other fine-print symbology. On a side note, some app makers, including Seattle Avionics with its FlyQ EFB, are adding welcomed functionality that enables users to configure the size and color of onscreen text. Other than new bezel colors, park the new mini 3 side-by-side with the first-gen mini and you wont tell the difference-until the screen comes alive.

The new mini 3 uses Apples Retina display, a 7.9-inch LED-backlit touch LCD display with IPS, which stands for in-plane switching. IPS is far from new technology, although Apple marketing may lead you to believe it is. It was actually developed by Hitachi in the mid-1990s, but has become the gold standard for tablets and smartphones because it helps eliminate image distortion when you apply pressure to the touch display. Additionally, screen image coloring remains true at wide viewing angles, while built-in screen temperature control tweaks the display to compensate for lighting conditions, yielding a more uniform image. Screen resolution is 2048×1536 pixels. Its brilliant, in our view, in low lighting conditions.

But the ugly side of the iPad is screen glare-a real nag in sunsplashed cockpits. We admit to capitalizing and using it as a vanity mirror.

For our evaluation in a Cirrus, we tried the mini 3 both naked and with the MyGoFlight Armorglas antiglare screen protector. This is a $50 product thats made of actual tempered glass. Were impressed with its anti-scratch, anti-smudge and the dexterity it retains on the touchscreen. Based on our use, we recommend an anti-glare screen cover for most cockpits and to protect the display from getting scratched. If you decide to go without one, the Retina display has a fingerprint-resistant olephobic coating.

The basic operating logic is mostly unchanged from previous models, with the exception of the Touch ID fingerprint sensor for unlocking the tablet (if you passcode protect it). We initially dismissed the feature as gimmicky, but learned to appreciate its utility (a shortcut, really) in the cockpit, except when wearing gloves, of course.

Like the mini 2, the mini 3 uses Apples A7 processor with 64-bit architecture-notably quicker than the A6 processor used on the original mini. Apple offers the device in either 16GB, 64GB or 128GB storage options, with WiFi-only or WiFi and cellular connectivity with GPS assist. The entry-level 16GB model is $399, while the 128GB model with WiFi and cellular is a whopping $729. Add a mount, protective case and screen protector, and youre into the thing for close to $1000.

Samsung Galaxy
The $399 Galaxy Tab S 8.4 is Samsungs mid-priced tablet and preferred by at least two major Android aviation app makers we talked with for its processing power, size and screen resolution. Its chassis size is close to the iPad minis, at 4.94 inches wide, 8.37 inches high and 0.26 inches thick. It weighs 10.37 ounces.

Two touch softkeys are on the bottom of the bezel. The back key steps you back in menus, and the recent key allows you to quickly change between the applications you used most recently. There is also a hardkey between the two softkeys for waking the tablet up. A volume key and main power button is on the upper right side of the case. Like the iPad, the power receptacle is on the lower edge of the case. This isnt a great location if you rest the tablet in your lap during flight. Chances are good that you have a drawer full of the familiar power cables left over from other devices that will fit the power jack.

The Tab S 8.4 has the same 2560 x 1600 WQVGA screen resolution and 16:10 aspect ratio as the 10-inch Galaxy. Next to the mini 3, Samsungs AMOLED screen technology might seem more vibrant in certain lighting conditions, and we think its punchy vibrance pays off when the screen is splashed with bright sun. The default screen setting is adaptive, which automatically tweaks sharpness, gamma and color saturation, but you can also select AMOLED cinema, photo and basic modes. We mostly kept it in adaptive mode and adjusted the brightness as needed.

The Galaxy uses Samsungs Exynos 5 Octa-core processor, which is four 1.9 GHz cores and four 1.3 GHz cores. That geek-speak translates to lightning fast map redraws and quick app bootup, although we didnt find it to be noticeably quicker than the iPad when running Garmin Pilot. As for internal storage capacity, the model with 16 GB is standard, but there is a version with 32 GB, priced at $579. A MicroSD expansion slot is on the right side of the case. That extra storage could come in handy for storing large chart libraries, for example. With the 16 GB iPad, you might have to delete stuff to gain storage space.

Standard on the Galaxy is an 8.0 megapixel rear-facing, plus 2.1 megapixel front-facing camera. The device has a fingerprint scanner for logging in as one of seven available users, with customizable profiles. This could be useful in club or partnered aircraft where the tablet remains in the cockpit for all to use.

The operating system on our evaluator is Android 4.4.2 KitKat kernel with Samsungs TouchWiz interface. TouchWiz lets you run two apps side by side (accessed in multi-window mode) by swiping the screen.

Based on our trials, we give the Galaxy 8.4 a slight edge over the iPad mini 3 for battery life, but not by much. Both tablets should run for 10 to 12 hours, but the Galaxys 3.8-volt lithium ion battery had slightly longer legs while running Garmin Pilot, occasionally browsing the web and with Bluetooth connections. On a side note, MyGoFlight sent us a sample of its Dualmicro rapid USB charger for plugging into a DC power receptacle. Its compatible with Apple and Android, can charge two devices at once, accepts input voltages from 12 to 30 volts, outputs 5 volts at 4.8 amps and has been tested for noninterference.

The Galaxys GPS performance in the cockpit was flawless and we never found the need to connect with an external GPS. The non-cellular mini will require an external GPS. A GPS-equipped ADS-B receiver will work, too.

Apps, accessories
This is where the iPad wins by a large margin. First, the market is flooded with cockpit accessories that cater to any iPad model. Browse the Sportys catalog and youll be overwhelmed with iPad gadgets, but not so much for Android tablets.

For instance, we attach the iPad to an articulating folio mount that has a leg strap, using it in the cockpit as a kneeboard. We couldnt find such a mount for the Galaxy, although MyGoFlight said its working on one for release later this year. The company just introduced its Aviator Sportcradle, a universal mounting cradle that can accommodate most Android tablets when the device is naked or in a protective case. The $99 cradle with adjustable arms is compatible with MyGoFlight Sport-series yoke, suction and glareshield mounts, which are priced from $168 and up. Theres also the Slipgrip holder and a RAM cradle.

The Sportcradle holds the Galaxy securely and allows for 360-degree rotation, but one of the attachment arms gets in the way of the tablets bezel-mounted back softkey. Its workable, but not ideal. We attached both tablets to the control yoke of a Piper Cherokee and neither was too intrusive in either portrait or landscape configuration.

To name a few popular apps for Android-with no compatibility for iOS-there is FlightPro (we covered it in the July 2014 issue of Aviation Consumer), AvNav EFB (we reviewed it in the October 2014 issue) and Naviator from 123west Software.

There is good Android compatibility with popular ADS-B receivers, including the iLevil devices made by Levil Technology, Garmins GDL39, the Dual Electronics XGPS170 and the SkyRadar products.

Conclusion
As impressed as we remain with the mid-sized Galaxy tablet, we think navigation app compatibility could deter some users from switching from the iPad, particularly when accustomed to one of the top iOS apps. On the other hand, full-featured apps including FlightPro and AVnav EFB are certainly worthy, based on our trials. As for accessories, universal mounting options from RAM, Slipgrip and MyGoFlight are available, but the market simply has more choices for the iPad.

With an onboard GPS, additional storage capability and a display that slightly edges the iPad mini 3, we prefer the Galaxy Tab S 8.4 hardware. But until the navigation app and hardware market catches up-and there are signs that could be happening-we still favor the iPad mini 3 as the better overall choice for a mid-sized cockpit tablet.