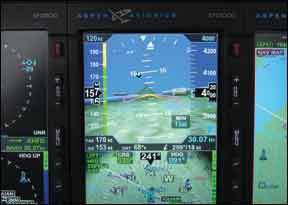 Touchscreen may be the top buzzword in avionics, but synthetic vision (SV) is right behind. Many pilots don’t know why they want synthetic vision, or even fully understand exactly what it is, yet the gee-whiz factor alone has made SV systems the most sought after upgrade we’ve seen in a while.

Whether synthetic vision is worth the non-trivial expense depends on your mission and your ability to absorb a lot of overlapping data on small screen.

Aspen ESV
Late to market with what they call Evolution Synthetic Vision, Aspen’s SV is now certified and flying. It’s an option on new Pro-series PFDs (it won’t play on entry-level Pilot models) and all MFDs, and is a field add-on for existing systems. The cost for upgrade or new installs is $2995 per aircraft and requires the installation of a remote aural alerter, if not already equipped. This puts many upgrades in the $3500 range.

SV is pilot selectable and when it’s turned on in an added menu structure of new operating software, it replaces the traditional blue-over-brown background of the attitude indicator with a real-time, software-generated, 3D view of terrain, obstacles, and traffic (if traffic awareness equipment is installed). It can be configured for full screen, presenting SV on the entire PFD, or split screen. On MFDs, SV can be displayed in thumbnail view or full screen.

Aspen’s SV uses what they call a nine-arc-second and three-arc-second resolution terrain data to render the synthetic picture. Three-arc-second provides 400 data points per square mile. That’s one data point per second if you’re cruising at 150 knots.

The user selects either a narrow or wide field of view, or NFOV/WFOV as it’s labeled on the soft keys. Logically, a wide field of view is suited for en route cruising, while narrow field of view tightens it up for approach ops. The SV terrain is presented in topographic terrain color (coloring that is similar to a sectional chart). Terrain alerting shades that base map red for terrain less than 100 feet below and yellow for terrain clearance that’s less than 500 feet. The Terrain Warning System (TWS) provides visual, audio (why you need the aural alerter) and text warnings. We wish Aspen could send an audio signal to the audio panel instead of the old-school sonalert. It’s just primitive.

Synthetic vision systems use a Zero Pitch Line, or ZPL, as an integral part of their attitude display. You can think of the ZPL as the SV equivalent to the white line separating the orange “earth” from the blue “sky” on a traditional attitude indicator. Aspen’s SV shows the ZPL as a single, but split, white line. Terrain poking above the ZPL is above the aircraft’s altitude. SV presents all obstacles taller than 200 feet AGL that are within 2500 feet vertically of the aircraft altitude, and they grow larger as they get closer to the aircraft. There’s also an Aircraft Reference Symbol, a yellow marker used to determine the pitch attitude of the aircraft relative to the ZPL and pitch scale. We particularly liked this feature when showing the SV on the MFD screen.

As with all SV systems, there’s a Flight Path Marker (FPM) that graphically depicts the lateral GPS track and vertical speed of the aircraft to create a three-dimensional pointer of where the aircraft is going. Put the FPM on the ZPL and you are holding perfect altitude. Fly a perfect ILS and the FPM will bullseye the 1000-foot marker on the virtual runway—and you’ll do the same for the real one.

The FPM’s shape and color change providing an immediate visual cue whenever an alert is generated. It can appear green, white, amber and red. Since the FPM uses VSI data and GPS track, we noticed an inherent lag in its movement, especially with rapid heading or pitch changes. You have the option of removing the FPM from the screen, but we think it’s an integral part of flying SV.

One feature we grew to like is the airport flags. They pop up at 20 miles out, showing the airport’s identifier and its virtual location. The flag for the destination that’s in the active flight is magenta, keeping in tradition with a magenta course line. The flags disappear at two miles to reduce clutter.

Garmin SVT
Garmin’s SV is called synthetic vision technology (SVT) and is standard on the G600 and a $4995 enablement option for the G500 retrofit PFD/MFD. Garmin’s SV has a size advantage over Aspen’s ESV given the bigger screen that spreads it all out. Garmin SV won’t play on the MFD. However, a PFD field of view can be represented on the MFD’s navigation map as a top-down image that corresponds with the view shown on the PFD.

Garmin SV depicts topography using both audible and visual alerting (terrain that poses a threat to the aircraft is shaded yellow or red). SV data is derived from the aircraft attitude, heading, a 3D GPS fix and a database of terrain, obstacles and other topo features.

Garmin’s projected FPM is referred to as a velocity vector, and appears on the PFD at ground speeds above 30 knots. Garmin’s ZPL is drawn completely across the display. An old-school ATP put an interesting spin on flying with the flight path marker for the first time: “I like my steam gauges better than glass, but while cruising along at night in IMC it occurred to me that if I had to ditch in the big lake surrounded the hilly terrain below me, I would have put the flight path marker exactly where I wanted to splash, and that’s where I would go. It’s that accurate.”

Garmin’s SV runway shows in green for soft-surface runways, such as turf, and gray for pavement. A runway that is associated with an approach in the loaded flight plan gets an extra outline in white—a nice touch.

Terrain warning on Garmin’s SV seems the most simplistic, if not stark in comparison to other SV systems. Towers and ground obstacles appear as unmistakable 2D symbols, but in perspective view with relative height above terrain and distance from the aircraft. They won’t change colors until a terrain alert turns the conflicting feature red and an obstacle label appears on screen.

Speaking of conflict, Garmin’s SV traffic is displayed in 3D, appearing larger as the threat grows closer, as well as the traditional white turning to yellow. Get close enough to another aircraft, and you’ll see a startling, big yellow orb.

Avidyne’s New View
Avidyne has yet to certify SV, but their recently announced PFD4000 retrofit and their R9-3 integrated cockpit (launched in the Piper Meridian) will both play it. Don’t wait for SV for legacy Entegra displays—it will never happen. We’ll look at the PFD4000 and R9.3 in a future article, but here’s a primer.

Avidyne has its own nomenclature, but their FPM and ZPL function similarly to Aspen and Garmin. For airport flags, Aspen uses a METAR-style gray flag when the airport is in field of view. The flag is removed at three miles when the runway outlines are clearly visible. With valid METAR data, the airfield flag is color-coded to represent the ceiling and visibility. And when close for landing, the magenta-tinted runway is depicted with numerical identification and centerline markings.

Avidyne’s synthetic vision offers 3D traffic, terrain and obstacles in a logical and easy-to-interpret layout. But then the eight- and 10-inch screens of the PFD4000 and R9 give them lots of of real estate to work with. Terrain is where the Avidyne SV really shines. It’s intense and puts a serious emphasis on both awareness and alerting. If you smack terrain flying this system, there’s no hope for your piloting skills. A 3D depiction of obstacles is shown out to 12 miles.

Chelton FliteLogic
This little-known system has had SV for years and is loved by its owners but we think it’s similar to the Garmin GNS 480/CNX 80—way ahead of its time, but that time has passed.

Chelton never responded to our queries about their plans. We wouldn’t avoid an aircraft that had a FliteLogic already, but we can’t recommend installing one.

Conclusion
The final question is, of course, “Is an upgrade to SV worth the cost?” We’ll give that a qualified “yes.”

For instrument and night flight, there’s a real potential for increased safety and peace of mind given intuitive forward view of SV. That’s undeniable. Our qualifications are two-fold. First is that intense level of displayed information can be a source of data overload. That’s why we give Garmin SVT high marks for simplicity and Aspen kudos for SV on the MFD. Secondly, even though SV is basically intuitive, you’ll have to put in some effort and learn how those ZPLs and FPMs really work to reap the full benefit of your investment.

Don’t think you can get the same benefit with a portable display like Garmin’s new 796, either. Installed SV and portable SV are so different in accuracy, reliability and practical use that they should really have different names.

If you’re still planning your glass-panel upgrade, is one company’s SV so much better than another that it should sway your buying choice? Not really, but consider this hardware limitation: While a single-screen Aspen PFD remains a solid value, especially for lesser aircraft, you’ll need to accept that SV plays only on the PFD. Add an MFD to that Aspen PFD and you should also get a quote for a Garmin G500, as the budgets are getting similar. We think other factors about the G500/600 versus a two- or three-screen Aspen are more important than SV. If adding SV to a single-screen Aspen system, remember you have an additional terrain and obstacle database to keep up.

We also think Avidyne is the company to watch with their in-development PFD4000 retrofit. Its synthetic vision and other features could change this whole playing field. We hope to know more in the coming year.