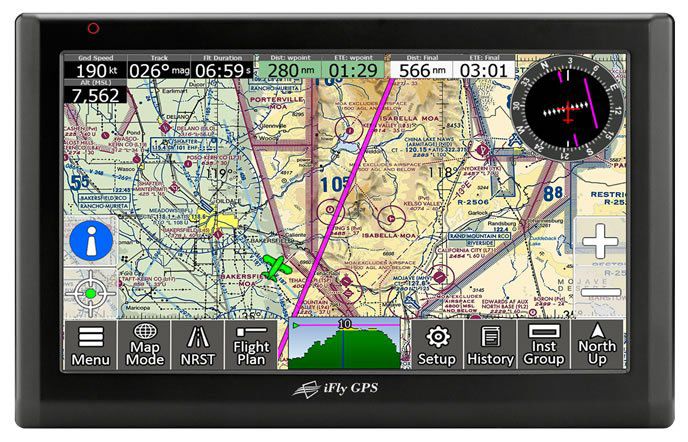 Before full-size tablet computers made their way to the cockpit, the Adventure Pilot iFly 700 GPS navigator earned respect as a capable big-screen chart reader. As a bonus, the iFly tablet could serve double-duty as a portable GPS. But there was one problem: Garmin. It dominated the market by rolling out model after model of portable navigators, including the aera series and eventually, the GPS696, which is still in the lineup today.

Then Apple and Android tablets came along and the market seemingly forgot about traditional portable GPS. Still, Adventure Pilot continued to advance its line of iFly tablet GPS systems. Its latest model is the iFly 740—a 7.25-inch tablet-based GPSMap that brings sizable improvements in screen quality, while finally ditching the awkward remote power supply that hindered portability in previous models.

The 740 tablet runs the Adventure Pilot iFly GPS app, which is compatible with both iOS and Android tablets. We recently covered the app in detail in the March 2015 issue of Aviation Consumer, so in this article we’ll concentrate on the capabilities of the iFly 740 GPS hardware.

The $899 iFly 740 moving map GPS is identical to the older iFly 720 in form factor, but has a higher performance processor with over double the processing power. It also has a more powerful internal WAAS GPS engine.

The 740 also includes Adventure Pilot’s EasyView high-definition charts, plus the $50 iFly Streets app. Like the iOS and Android version of the app, the 740 has VFR charts, taxi diagrams IFR low and high airway charts, plus georeferenced approach plates and ADS-B NEXRAD overlay, when interfaced with a portable ADS-B receiver. The “Enhanced” VFR/IFR subscription, which includes the low enroute IFR charts and approach plates is $109.99 per year, or $69.99 per year without approach plates or enroute charts. A single subscription will work on the dedicated 740 hardware and tablets.

Weighing 14.5 ounces, the chassis measures 7.25 by 4.50 by 0.82 inches and has a 7-inch display, which is operated entirely by resistive touch. Its size is the closest to mid-size tablets, including the iPad mini and Samsung Galaxy Tab S 8.4.

While many general aviation cockpit displays have capacitive touchscreens, Adventure Pilot points out that resistive touchscreens are the choice of military and industrial applications. Further, resistive technology isn’t hypersensitive and might perform better in turbulence. It is also more glove-friendly—enabling pilots to operate the screen with any type of glove, not just tech-friendly ones.

But if you’re used to the capacitive display on many tablets and smartphones, the iFly’s display will take some getting used to, especially when touching, dragging and zooming the map. There is also rubberband route modification. As you would expect from a tablet, the display can be configured for landscape or portrait view.

The iFly 740 (and smaller iFly 520) aren’t Android or iOS devices. Instead, they run on Windows-embedded CE6, a closed-core operating system commonly used by developers. That offers an advantage, says Adventure Pilot, because it doesn’t suffer from vulnerabilities like an open platform can. As the graphic on page 13 shows, it also offers flexibility for numerous I/O interfacing—including rich audio/video capabilities. It also provides for future expansion.

Speaking of expansion, the tablet has a digital NMEA output for connecting to compatible autopilots, including models from Dynon and TruTrak. Ask your shop to connect it with your certified autopilot and expect a big negative—it’s generally not approved.

There is also a serial data output for feeding GPS position to compatible EFIS displays and fuel computers.

While this is a portable device (it comes with a suction mounting arm which we found to be cheaply made, compared to a RAM mounting arm), many users mount the device on or in the panel. Adventure Pilot offers a $59 RAM yoke-mount kit and a $39 kneeboard for additional mounting options.

The device comes with a remote control—useful for aircraft where you solo from the rear seat, for toggling maps, zooming and for using the touch-of-a-button Plane function. It automatically centers the display to your current location

The tablet has two speakers built into the rear chassis, in addition to a wired audio output for driving an audio panel or headphones. This supports the active alert messaging for terrain, airspace and traffic callouts (when interfaced with portable ADS-B receivers).

The list of ADS-B receivers and transceiver is extensive. It includes the first-gen Stratus, the Clarity and Clarity SV, iLevil SW/AW and iLevil 2 SW/AW, Sky Radar DX, the FreeFlight Explorer and RANGR, the SkyGuard TWX and the NavWorx ADS600-series

The iFly devices have internal WiFi (it doesn’t have Bluetooth) and you connect to a server as you would any other device.

Our evaluator had beta version 9.0 and performed well. We never experienced crashing or freezes, and the processor made for reasonably fast map redraws and screen refreshing, although we found that nav data downloads are slow, even with an efficient Internet connection. Updates can be made using an SD card, but the process only works with a Windows computer running Internet Explorer.

The system comes standard with an internal WAAS-enabled GPS engine, giving it an advantage over a non-cellular iPad. For reliable navigation from inside the cabin, the iPad could require a remote GPS. We evaluated the iFly 740 in the cabin of a Cirrus while placed on the lap and its receiver performed well without connecting to the optional external antenna.

When the unit is panel-mounted using an AirGizmo panel dock, an external antenna will likely be a required $25 accessory. It simply plugs into the side of the chassis.

Unlike the iFly 720 and earlier predecessors, the new 740 has an internal battery—a welcomed improvement for those that want to operate the device in a portable fashion. Gone is the TPOWER mobile power station that required a wired connection to previous systems. Still, you’ll want to plug the device into ship’s power. Battery endurance is a measly three hours, which is not uncommon for a high-quality color LCD display, although any iPad and Android tablet will leave it in the dust. The unit has a built-in Li-Po backup battery for roughly 30 minutes of backup.

The tablet has 1300-nit (nit is a unit of visible-light intensity) screen brightness. In real-world sunlight, it passed our test with flying colors, performing well in a bright sunsplashed cabin. We found it easy on the eyes in a darkened cabin, too.

But when it comes to display specs and overall quality, the iFly 740—with an LCD screen resolution of 800×480 pixels—is dominated by the latest mainstream tablet computers of its size. Compared to Apple’s iPad mini 3, with a 2048×1536-pixel Retina display, and Samsung’s Tab S 8.4 with its 2560×1600-pixel WQVGA screen, the 740 is less endowed. This is only slightly apparent to the eye when placed side by side. But the 740’s saving grace is that 1300-nit screen brightness, which is actually brighter than the flagship Samsung tablet. The screen has an automatic night mode with color inversion.

As impressed as we are with the updated and capable iFly 740—and the iFly GPS app—it’s natural to question its stamina in a cockpit tablet market dominated by iPad and Android tablets.

“A growing number of pilots are frustrated with poor sunlight readability and the glare issues associated with consumer tablets. There are also buyers that want reliable hardware that is designed specifically for cockpit use. With all the modern benefits of an app-based navigation tool, plus an extremely sunlight-readable display and robust hardware, the iFly 740 GPS fills this need,” said Adventure Pilot’s president and owner Walter Boyd.