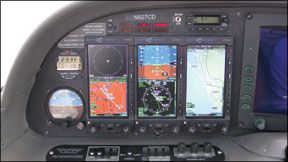 Once upon a time in a galaxy not far away and not that long ago, there was no such thing as an EFIS. The aviation world was guided by spinning iron gyros on jeweled bearings. Then, overnight it seems, you could practically buy one of these things in the electronic department at Walmart.

Okay, so thats an absurd exaggeration, but there are still a bunch of aftermarket EFIS choices out there and Aspen,

Garmin, Avidyne and, soon, Bendix/King continue to offer more. Most recent is an expansion of the Aspen line with new approvals for the EFD500 and EFD1000 in the multifunction role.

As weve reported previously, Aspen has essentially invented its own niche market by engineering a compact, easy-to-install PFD that fits electronic gyros into the space normally occupied by the AI and DG/HSI. Even in an anemic market, Aspen has enjoyed brisk sales, evidently because the installation does less violence to the basic panel and because the price is right.

Aspens plan all along had been to make a full glass suite available by displaying additional information on a second or third display. In September, it announced approvals to do just that.

The basic building blocks for the entire Aspen line is the EFD1000 hardware. There are three versions: The $5995 EFD1000 Pilot is the entry level model with a single ADAHRS that shows attitude, but that wont interface with NAV or GPS sources.

Next up is the $9995 EFD1000 Pro that does what the Pilot does, but interfaces with GPS and NAV sources give it flight director input, dual bearing pointers and GPSS autopilot

capability, plus rudimentary map information. The top-of-the-line EFD1000 ATP ($12,995) adds traffic, weather and charting functions to the PFD side.

On the MFD side, the entry level 500 is priced at $4995 while the 1000MFD lists for $7995. If you want weather, youll have to opt for Aspens $2495 EWR50 XM WX Satellite weather receiver; the system wont play with other brands, something that might limit its appeal to some buyers.

So whats the difference between the 500 and the 1000? Think of the 500 as nothing but a display capable of accepting remote sensor input, including GPS and map data, traffic and weather. The 1000-for a little less than a third more money-will do all that the 500 will, but it can also serve as a full PFD for buyers who want belt-and-suspenders backup, with duck tape thrown in.

To do that, it requires its own independent ADAHRS wired to an independent bus, plus a back-up battery. If the main PFD goes dark, a single button push pulls up the identical PFD on the right side (or left, if you put it there) for instant reversion.

This capability is unique for the aftermarket and were sure Aspen will-and should-make it a sales point.

We flew the new system with Scott Smith in a Cirrus SR22 equipped with three Aspen displays: an MFD 500 on the far right, an EFD1000 Pro in the center and an MFD1000 on the right.

First, the interfaces. The 500/1000 will accept traffic from any of the popular boxes, lightning data from a remote WX-500 Stormscope and weather from the aforementioned Aspen receiver. The SR22 we flew was equipped with dual Garmin GNS430s which display course and flightplan data on the MFD1000.

One limitation of the Aspen architecture is screen size or, more accurately, aspect ratio. Measuring 3.5 by 7 inches, the Aspen displays are strongly biased toward portrait mode. This is ideal for a PFD display, less so for an MFD, especially when you want to see things well to either side of the displayed course line. The easy solution to this is a panning function-up and down on the right hand knob, left and right on the left knob. It takes a little getting used to, but its not a show stopper.

The basic buttonology is the same as the PFD, since the hardware is the same. There are two knobs on the bottom of the bezel and three keys. Along the right bezel are five context-sensitive keys, a menu key, a map range key and a red-labeled reversion key.

As with most displays, the MFD display consists of multiple pages and subpages or layouts, which you navigate using the knobs. For example, for the weather function, there are eight pages and a page navigator in the lower left of the screen tells you where you are: 2/8, 3/8 and so forth. Each page has a different weather product.

This design approach provides both unambiguous access to information in a logical way and quite a bit of flexibility. For example, one of the layouts allows a basic map in the lower portion of the screen and two thumbnails at the top. Using the menu keys, you can customize these thumbnails to suit your fancy. For instance, if youre tiptoeing through convective weather, you might want to have the strike page in one thumbnail and NEXRAD in the other, or some other combination. Again, other MFDs do this in some fashion, but not in displays that occupy the six-pack zone.

None of these combinations are difficult to figure out, even without cracking the pilots guide. We think this is primarily because Aspen hasnt tried to do too much with the MFD, but it still has enough capability to keep up with the competition. We would rate screen size, brightness and viewability as excellent and even though some of the labeling is smaller than we would like, the fact that its placed directly in front of the pilot is a plus.

When were asked about our honest feelings about the Aspen concept, we always seem to visualize an older airplane-say, a Comanche or an E-model Mooney-that already has a GNS430. The EFD1000 allows the owner to bring this airplane up to state of the art for not much money, assuming you dont go hog wild with the interfaces. The MFD500/1000 offers a similar cost-effective, simple mechanical installation that doesnt requiring ripping out the panel back to the cold side of the firewall. Check on the detail on the prices of other MFDs in the chart on the opposite page. In our view, the Aspen MFD option is near the top in value.

However, the Aspens vertical aspect may not appeal to everyone. If theres room in the center panel and budget isnt a driving factor, there are other products-not to mention used options-that might prove a better fit. Either way, if you already have the Aspen PFD, upgrading to an MFD of any kind will start around $10,000 and go up from there.

If you want an aftermarket MFD that doubles as a PFD, Aspen is the only choice and that will give it strong market appeal.