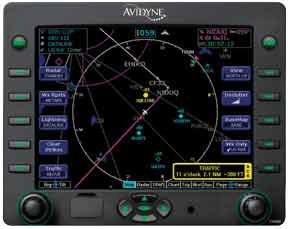 Weve flown and installed enough Avidyne TAS systems to confidently hail them as top values in active traffic alerters. We even proclaimed it the best traffic system in our 2008 Gear of the Year award.

It was Ryan that engineered and birthed the twin-antenna 9900-series TCAD back in the 90s. When Avidyne and Ryan merged, the popular 9900BX became the TAS600. With a liberal display potential, its been a brisk seller and popular option for active traffic alerting.

The latest evolution in Avidynes TAS logically promises ADS-B functionality, a refreshingly lower price tag and retains a notoriously complex and critical installation process that will make or break performance.

If the TAS600 product line seems complex, thats because one size doesnt fit all. Avidyne offers various flavors of the TAS600 to match the performance and complexity of the aircraft. Avidyne recently obtained AML-STC approval for the TAS line and revised the AFMS, making it easier for shops to sign off the installation with less help from the FAA. But its up to the shop and the owner to determine how much system they need or want to pay for.

The top-of-the-line TAS620 (ne the Ryan 9900BX) has a 21-nautical mile range, +/- 9900 feet of vertical scan and a 55,000-foot ceiling. Its target market is speedy jetprop singles up through bizjets and transport helicopters.

Its not until you get halfway through an install that youll realize just how complex the system is. Much of the complexity surrounds the installation of top and bottom blade-style antennas. Earlier TAS systems like the L-3 Skywatch used single, top-mounted antennas. While a simpler install, single-antenna systems miss traffic due to the aircrafts own fuselage getting between the antenna and some targets.

Aside from the dual antennas, technicians need to find space to accommodate the eight-pound remote processor. It measures nearly 12 inches deep with all of its connectors in place and sits 7.25 inches wide.

Still, the Avidyne TAS processors are lower profile and lighter than the competition, including the L-3 Skywatch, which has no ADS-B option, and Garmins GTS800-series TAS. Compared to the ADS-B capable GTS820, Avidynes TAS offers a slight edge in installation by not requiring an external amplifier and having fewer RF connections to the remote processor.

Youll need to display the traffic symbology somewhere, and Avidyne impresses on this front. The healthy variety of compatible RS232 and ARINC429 interfaces include almost every GPS or MFD in the Garmin line, Sandels EHSI, Aspens PFD and MFD, Honeywells KMD series, Universal, Chelton, and, of course, Avidynes own Entegra and EX600 MFD.

The TAS600 uses easy, TCAS-like symbology. Non-threat traffic thats greater than 1200 feet and beyond six miles is depicted as open white diamonds. A proximity alert means this becomes a filled white diamond and warns the threat altitude is within 1200 feet vertically and six miles laterally. The dreaded wiggle-in-the-seat traffic alert (TA) shows as a yellow circle and warns that traffic is calculated on an intercept course of the host. Descending or climbing arrows next to a traffic tag depict a target climb greater than 500 feet per minute.

We like a feature that Avidyne calls Heads-Up Audible Position Alerting with ATC-like callouts of bearing, relative altitude and range. These appear both on screen and over the audio system. Were convinced that a “Traffic, six oclock, low, two miles” callout, for example, allows for quicker target acquisition once eyes go outside the cockpit. Compatible displays with RS232 interfacing can display N-number and squawk code tags for Mode S targets. This is surprisingly helpful for situational awareness when a controller is working conflicting traffic.

A ground mode eliminates nuisance audio callouts by muting the audio and suppressing display of other taxiing aircraft. Airborne targets are still shown. The system automatically comes out of ground mode climbing through 400 feet AGL.

Avidyne advertises a $2000 ADS-B upgrade for the TAS600-series. It seems the appropriate answer to Garmins GTS800-series TAS/ADS-B. Adding ADS-B would round out Avidynes already capable system, but the proposed upgrade is not full-up ADS-B. That said, it has some advantages of simplicity and cost.

The TAS600A-series, which Avidyne says will be available by years end, lacks ADS-B output. This means it wont get any data streamed from ADS-B ground stations; it can only paint line-of-sight targets transmitting their location. Because of this, theres no need to equip with a 1090ES transponder. But by that same token, this wont make your aircraft ADS-B compliant, either.

The system also needs a tie to an onboard GPS system for proper depiction of traffic in relation to the host aircraft.

We think even a limited system offers reasonable valuable for a few reasons. Seeing a target with ADS-B rather than TAS means a much more accurate position and vector for that target. But until more aircraft have ADS-B, if you dont have TAS, youre dependent on data uplinked from the ground stations to see any other traffic. Think of the TAS half of the system as a fallback, displaying all transponder-equipped aircraft that dont have ADS-B Out (or have a UAT for ADS-B, which Avidynes system wouldnt see, either). The TAS-600A can display both ADS-B and traditional targets simultaneously.

Avidyne told us that in non-congested airspace, their airborne ADS-B might see 200 miles. While you wont see this kind of performance in busy space-50 miles is more like it-it beats the range of the average TAS system. Avidynes processors have a maximum output of 42 watts, which is throttled back based on airspace congestion.

In talking with Avidynes Ted Lester, the companys ADS-B lead guy, we sense that Avidyne has a diverse line of ADS-B products in the works and adding ADS-B to the TAS system is just a start. The flat rate upgrade has appeal, but we wish Avidyne would also guarantee that the system would be upgradable to receive the ADS-B ground stations as well as ADS-B air-to-air. So far, they wont commit to that.

Reliability of the TAS600 has been good, but not flawless. Given the flat-rate repair cost of the system, we think purchasing Avidynes FlexCare extended warranty coverage is worth considering. It covers the system for one, two or three years for $500, $750 or $1000, beginning when the two-year warranty expires.

If theres a wart with the TAS600, its tackling a complicated installation that for a basic retrofit could mean writing a check that sails toward $15,000 in some applications. But thats a complexity in all TAS installations where antenna placement is critical, difficult and fraught with interference issues. Owners of airplanes certificated to fly above 18,500 feet will have to pay extra for a higher-tier processor.

Still, the recently reduced price of $8490 for the entry-level TAS600 helps tame the install burden, which in our view makes the TAS600 a top choice in active traffic systems with promised ADS-B function in the wings.