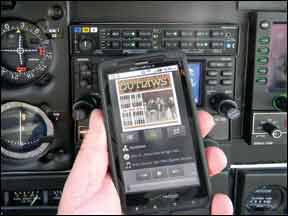 PS Engineering is compulsive when it comes to perfecting and adding new features to otherwise well-engineered aviation audio products. The result is a product line that remains cutting edge and a step above the competition. The newest talent of the line is the PM8000BT.

The six-seat-capable PM8000-series audio system earned top-dog status in our audio panel review (Aviation Consumer, August 2009), and that status has held up under long-term testing. We didnt think it could get any better until company founder Marc Scheuer took it to the next level with the logical addition of Bluetooth connectivity-an industry first.

Weve used Bluetooth audio connections in the cockpit with medi-ocre results, so we approached our 8000BT flight trials with generous amounts of skepticism. Turns out we were wrong. The 8000BT easily synched to our quirky Motorola Droid X phone where we stashed some of our favorite MP3 tunes.

And for sophisticated music on the fly, you wont find a panel more complete than the 8000BT. Just like the original PM8000 introduced a few years ago, the 8000BT retains the backward compatible and slide-in capability for Garmin GMA340 replacement without an audio rewire job. The 8000BT will also play with existing plain-vanilla PM8000 installations without the need for rework. As we go to press, Garmin brings to market the new GMA350, which well look at in the near future.

We applaud PS Engineerings smart thinking when it comes to this direct-replacement mentality because audio installations are big work, and tearing apart the radio stack and interior to replace an otherwise modern audio panel is a crummy way to spend upgrade money.

Our test aircraft had a GMA340 which we swapped out a few times to sample the differences between it and the 8000BT. The PM8000BT wins hands down is in entertainment audio quality and clarity (and we think the GMA340 has fine audio to begin with).

The raw audio level of the music input piped into the 8000BT offers higher output than the GMA 340. We had the volume cranked all the way up on the Droid, and on a wired MP3 player, and could barely hear the tunes from the GMA340. The 8000BT had plenty of gain. There is an official field service modification that can be made

to the GMA340 that increases this entertainment audio gain, but it also increases the presence of unwanted background noise. Noise filters for that seem to give hit-and-miss results.

As a side note, its not uncommon to hear injected electrical system noise in the entertainment circuit of any panel, and increased volume could exaggerate this unwanted noise. Weve seen some owners painstakingly chase alternator and ignition noise with poor results. While the 8000-series is perhaps the best cabin audio you can install in your noisy piston cabin, it wont be perfect.

Panel space in most aircraft is getting tighter, and the audio console is getting in the way. Garmins solution is the remote-mount GMA35. But PS Engineering has an alternative. The V version of the 8000 can be mounted vertically, perhaps next to the radio stack, perhaps somewhere else where theres room. We applaud this outside-the-box thinking. PS clearly has a handle on the challenges techs face every day.

If you dont want to fumble in a side pocket to change the volume on your stowed music device, PS Engineering added a music volume control thats accessed by pressing and holding the speaker button. Since some telephones wont provide a side-tone (the sound of your own voice in the headphones as you speak) the panel can create an artificial sidetone. To answer a ringing call, you can answer from the telephone or from the panel itself-by pressing the TEL button, of course.

The 8000BT can connect wirelessly with up to eight devices. Only one can be a telephone, but we cant see why you would want to connect more than a single phone in such a small cabin anyway. The phone connection is controlled by intercom mode. Its a party line in a normal group intercom. Crew isolate puts the phone up front, and pilot isolate gives the left seat a private call. Radio calls wont mute the phone, but youre not supposed to be making calls in flight anyway, right?

We found the pairing of our phone to be seamless. It dropped the connection once, but we had a low battery we assume was the culprit.

Because the 8000BT is always discoverable, connecting is a straightforward matter of searching for and selecting the 8000BT from your devices menu. The connection streams music into the Music 1 input, which can be programmed to stream throughout the entire cabin.

Music control functionality is dependent on the device thats paired. The panel commanded our Droid X for skipping forward, back, pausing and playing the music. Some other units like the LG nV and iPhone might not have all of these functions.

A cool trick is the units ability to pair up with some notebook computers that have a compatible Bluetooth AV source. You simply add the 8000BT just as you would a remote speaker device. Another potential is to use a remote pairing device as a bridge to take music from computers output jack and connect to the audio panel.

If theres a fault with the new $2095 PM8000BT, its that many pilots wont learn all of the features this panel brings on board.

Many pilots dis the idea of flying with music in the headsets-until they make the leap and then cant live without it. As one Cirrus owner put it, “XM-delivered smooth jazz at just the right volume is part of every mission. Angel Flight passengers are more relaxed and, for me, it takes the edge off when things get interesting.”

Whether pilots will be more attracted to the freshly improved Garmin GMA350 remains to be seen. On the other hand, PS Engineering has certainly earned brand loyalty with products that focus on quality and bang for the buck value. Investing in their latest PM8000BT is smart money, in our view.