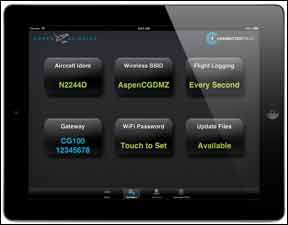 The thought of a wireless tablet computer interfacing with IFR-certified, panel-mounted avionics is enough to make an FAA  inspector squirm in his polyester. Aspen Avionics—who has a knack for obtaining product certifications in short order—recently slid this concept and its CG100 WiFi hardware through FAA certification channels and earned STC approval.

Connected Panel is an interface that’s sparking interest from a growing list of avionics manufacturers and app designers who are committed to joining Aspen’s open architecture. Could this be the start of WiFi-driven avionics? We think the system has serious growth potential and is worth considering when installing a multiscreen Aspen suite.

Wireless Gateway
The $2499 Connected Panel is essentially a communications network for flowing data­ from mobile devices—mainly Apple, for now, into compatible panel-mounted avionics. This data can include flight plans and comm radio frequencies, for loading into a GPS navigator, mainly Garmin’s GNS400W/500W and the future Aspen KSN770. Thanks to the wireless gateway, data can flow both ways—to or from the mobile device. For example, if you’ve ever wanted to send engine and fuel data into your iPad, Connected Panel could be the avenue for doing so, as long as there’s a compatible app designed for the task. More on that shortly. But no matter the data, the important aspect of the interface­­—and likely a convincing basis for FAA certification, is that the data first flows into Aspen’s certified multi-function display, using Aspen’s now-certified CG100 wireless connected gateway. Aspen refers to the MFD as a firewall because this is where the transfer of uncertified and certified data takes place.

The CG100 gateway is a compact, remote WLAN transceiver which weighs one pound and operates on 14 or 28 volts. It connects to the Aspen 500 and 1000 MFD by way of an Ethernet databus and then connects to compatible panel-mounted avionics through a serial RS-232 databus.

For connecting with the mobile device, the CG100 has a WiFi antenna which is generally mounted inside the cabin. For convenience, the antenna can be separated from the transceiver using a run of coaxial cable and mounted in a sidewall, headliner or in a bulkhead.

CONNECTED PILOT
Connected Pilot is the first in a series of planned Connected Panel products. The package includes the CG100 hardware and interfacing software that connects Apple iOS devices to the Aspen MFD. At this point, the system won’t work with a standalone Aspen PFD—you’ll need a second-screen MFD display.

The CG100 can receive and store data from almost any panel-mounted GPS navigator. Additionally, Connected Pilot can enter and synchronize flight plans between Garmin GNS400W and GNS500W series navigators and forthcoming Connected Panel-enabled flight planning apps. This uploaded, uncertified data can’t flow directly into the certified panel-mounted system. It first has to go into the Aspen MFD. From there, it’s up to the pilot to acknowledge the presence of this data and then manually send it off to the intended panel-mounted system. For now, the interface doesn’t allow the loading of instrument procedures.

The big concern with a wireless interface is the potential for losing control of the data flow. As automated as Connected Panel is, Aspen makes it clear that the data stream is a managed interface, with pilot-verified interaction.

Jeppesen offers synchronized upload and download route planning capabilities for Connected Panel. For example, route planning data created with Jeppesen Mobile FliteDeck on iPad can be transmitted for overlay on the Aspen MFD. GPS-based own-ship position data can also be transferred through the Aspen gateway to Mobile FliteDeck. This interface will show position on Jeppesen airport diagrams and enroute charts. The on-screen rubber-banding feature in the app will amend route plans on the iPad and then transmit the revised data through the Connected Panel gateway.

AvConnect, a developer of online and mobile products for pilot record-keeping­—including flight logs, maintenance tracking, engine diagnostics and performance trending information, has the Aircraft Manager app, which downloads flight data stored in the CG100 gateway. According to AvConnect founder and CEO Erik Murrey, the app and the WiFi interface with Connected Panel answers a call for ridding the tedious paper chase that’s required of maintenance recording and management.

The Aircraft Manager app automatically fills in an electronic aircraft and pilot logbook with a custom flight strip. This updates the aircraft’s times in the AvConnect maintenance tracking archives. From there, the data can be accessed on a cloud and through email and analyzed for predictive maintenance or diagnostics.

Airframe flight data, including AHARS-derived pitch, bank, roll and ground speed, plus other flight data, including GPS waypoints recorded from Garmin’s GNS navigators, are logged to the CG100 during flight. The data, according to Murrey, is valuable to fleet operators and training establishments looking to increase efficiency.

SOFTWARE LOCKOUT
The downside to this evolving technology has already been proven with Garmin’s new software 5.0 update to the GNS400W and 500W navigators. The optional software has rendered Connected Panel useless for GNS flight planning functions. Further, Aspen says it is unable to obtain integration specifications that enable ADS-­B compatibility with Garmin’s GDL88 system.

Aspen issued a statement to customers and the dealer network, saying they’ll continue to foster an open integration philosophy within the avionics industry. Further, Aspen urges all manufacturers to follow such an approach for the common good of general aviation. While we don’t consider this snag to be a deal-breaker, you’ll need to accept potential software incompatibilities in a changing and competitive market. Contact Aspen Avionics, www.aspenavionics.com, 800-322-8346.