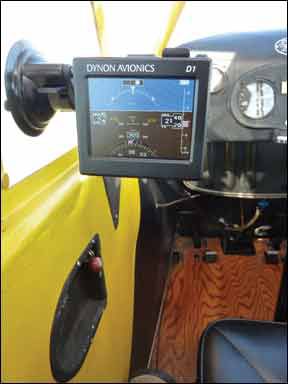 When Dynon surged into the lead for uncertified EFIS systems with the D100, D180 and later the Skyview, we knew it was only a question of time before they stuffed that technology into a portable. So it was no surprise that the D1 Pocket Panel appeared just ahead of AirVenture. If this gadget works as well for others as it did for us, we have little doubt it will become a good choice for owners seeking backups for their creaky vacuum instruments. Dynon has cleverly packaged the D1 so as to be not mistaken for anything even suggesting a permanent mount. That should avoid any eruptions from the odd rogue FSDO inspector.

EFIS With Limits
To keep things simple and avoid any entanglements—legal, electrical and pneumatic—the D1 is a trick combination of real EFIS and the sort of GPS-aided flight display Garmin has been including in its portable GPS products for more than a decade.

For pitch and roll sensing, the D1 has a MEMS solid-state gyro system just like full-scale EFISs. Lacking any airdata input, however, its airspeed, altitude, vertical rate and heading indicator are GPS derived. So altitude is really GPS altitude, speed is groundspeed and heading is GPS groundtrack. None of this is a deal breaker, in our view, because all you really want a backup gyro to do is to help you keep the wings level and the pitch manageable. The D1 does this easily; the additional data is gravy.

The hardware consists of a 3.5 by 3.2 bezel box that’s just shy of an inch deep. The screen consumes most of that real estate, so it’s about as large as the certified glass gyros you see in jets and turboprops. It has female sockets for external GPS, power—including charging via USB—and an SD data card for software revisions.

For mounting, Dynon provides a cradle that mates to a RAM suction cup mount and there’s also a device called a “pinch” mount that allows the D1 to snap into an empty instrument hole while remaining an easily removable portable. It stands proud of the panel so you can attach the ship’s power or GPS antenna, if needed. (We didn’t need it.)

Flight Trial
In what might be the world’s first glass-panel, no-electrical system J-3 Cub, we stuck the suction cup on the window and went flying. The first challenge—and it’s hardly worthy of the word—is to get the D1 calibrated so it knows it’s not on the ground in level pitch. The device has a small rocker switch on the side of the bezel to nudge the horizon line in the right direction, which you have to do more or less by eyeball.

Dynon says the D1’s software can accommodate up to 30 degrees of pitch error, but only 6 degrees of roll error. Its side-to-side axis has to be as close to perpendicular to the longitudinal axis of the aircraft as possible in order for the slip/skid indicator to work correctly and to get reasonably accurate turn-rate indications.

We were fast and loose with the installation and found the D1 calibrated itself with no fuss. We switched it off and re-initialized in flight with similar success. Because of its sluggish speed and lack of a precision altimeter, finessing the pitch in a Cub with the D1 is measuring with a laser and cutting with an axe. But it’s more than adequate to keep the airplane upright.

Screen brightness is good enough for a sun-splashed cockpit, although not quite up to big EFIS standards. Plugging the D1 into external power doesn’t seem to help the brightness much. For night flight, the display can be dimmed in steps with the side rocker switch.

Dynon says the D1’s rate limit is 150 degrees per second in any axis. We weren’t about to exceed this in flight, but in handling the device for mounting or inspection, we noted that a “horizon recovering” rate-limit warning appeared along the lower edge of the screen. Righting the D1 back toward level pitch and roll clears this message.

The D1 has a slip/skid ball that more or less conformed to what the Cub’s ball was indicating, which isn’t saying much since it often sticks in the glass tube. The D1’s heading indicator rotates in arc format and a magenta turn rate arc projects in the direction of the turn.

Obviously, measuring turn also involves yaw rate calculations so when the airplane wallows in the bumps, the D1 will show turn rate. It’s also a little oversensitive when rolling into a turn, but we think the rate indicator is just an unnecessary whistle for a backup device anyway.

Our only complaint about the D1 is its menu key. It simply didn’t work. The menu key is supposed to allow you to change units from knots to MPH or KPH, for example, and to set power-off and other preferences. We didn’t have time to get another unit from Dynon, but we’re taking the company’s word that this feature works correctly in properly functioning units.

Conclusion
The dysfunctional menu key notwithstanding, the D1 performed as claimed. It clearly knows which way is up and displays and reacts to aircraft movements just as a full-blown EFIS does. The display is bright and easy to read, although the airspeed and altitude typography is on the small side. You’ll need to mount the D1 in direct view to allow for that.

At $1425, the D1 is a good value, but it also has intense—and increasing­—competition from tablet-based products. Its principle advantage is that it’s small, self-contained and always on duty, so finding a practical spot for it on the panel will be easier than for a tablet computer. For more, contact Dynon at www.dynon.com.