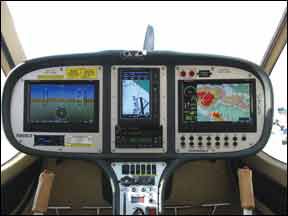 An icon in the experimental market, Dynon Avionics has built a reputation for offering cutting-equipment that’s easy to install and widely compatible. Dynon’s value-based pricing is practically a smack in the face of the certificated world, where twice the price gets you half the capability.

Skyview represents a fully integrated cockpit suite whose nearest equal is something at the G1000 level. Retrofits are fair game in nearly any LSA and experimental, and it’s a top seller for new LSA purchases.

Configurations
Skyview is available in dual or single screen configurations, and with a choice of two display sizes and types (the suite can support up to four displays). Skyview displays and remote boxes are efficient on space; each display requires about 2.5 inches of free space behind the panel plus room for connectors, which are the standardized nine-pin DB9 variety. Data is tossed between displays with efficient (if pricey) Ethernet cabling. Five general-purpose RS-232 serial ports connect to GPS receivers (yes, portable navigators, too), transponder and navigational radios such as the digital Garmin SL30.

The identical screens in a multi-screen setup serve double-duty as a PFD/MFD combination with flight instruments, engine display, autopilot command and mapping. Equipping with dual screens provides backup redundancy for both screens and adding a second ADAHRS. Single-point failures are further squashed with two independent buses and dual power buses. Additionally, a backup battery can be interfaced with each display to provide 30 minutes of power. ADAHRS performance is good—with valid flight data up and ready to rock within 20 seconds of boot-up.

You won’t have to eyeball the Skyview displays for long before being impressed with their screen quality. SkyView displays utilize LED backlighting technology that Dynon says will increase lifespan, allow for more uniform brightness, improves dark-cabin dimming all while reducing power consumption—a concern for many LSAs with puny electrical systems. For smaller panels, the SV-D700 display sports a seven-inch, 800 by 480 pixel, 1200 nit TFT active matrix LCD screen. The larger SV-D1000 is a big 10.2-inch, 1024 by 600 pixel, 1350+ nit TFT active matrix LCD screen. We looked at both screens splashed by bright Florida sun in several LSA cockpits and found them to perform well.

Rich User Interface
Dynon worked hard to improve the user interface over earlier systems. User input to the Skyview is accomplished with two bezel-mounted joysticks plus eight soft key buttons along the bottom of the display’s bezel. The controls have a positive and hearty feel, but we found the joysticks awkward. Joystick input results in an immediate screen action with speedy map redraws and fast menu hops thanks to powerful processors.

At first blush these displays are busy with information. But we found the screen layout to be reasonably intuitive with menus a manageable three levels deep. At the top of the display there’s a data bar that’s user configurable and displays important textual information, including the mode status of the autopilot.

SkyView can display many combinations of PFD, engine and moving map data in full-screen and split-screen configurations, as well as distribute this data across multiple displays.

In a dual-screen configuration the system synchronizes the most important information between the two displays so setting baro, bugs, engaging the autopilot, or acknowledging warnings only need to be done on one display.

PFD Panache
A quick glance at the Skyview’s PFD function reveals a familiar glass-panel layout with all the perks. With a valid OAT probe and GPS signal, the winds-aloft arrow indicates the wind direction relative to your current direction of flight. The wind strength, direction and crosswind component are displayed in basic text format. Altitude and heading bugs are conventional (and can drive the optional Skyview dual-axis autopilot, which uses the Dynon roll and pitch servos).

The altimeter incorporates a convenient density altitude readout, although we think it’s unfortunate it’s just labeled “DA,” which is confusingly akin to the DA for an instrument approach. The VSI function is refreshingly easy to interpret. This bug is used as an initial target for the pitch axis of the autopilot, when interfaced. Want to synch up the bug with the current vertical speed? Press the VSPD using the joystick for two seconds and it’s in sync.

Some Skyview functions are, well, different. The HSI display is mostly traditional with a magnetic compass rose (with cardinal points displayed in letters), heading bug and a rate of turn indicator. A cyan-colored ground track GPS pointer is located on the inner area of the compass rose. Comparing GPS track to your heading quickly shows the difference between where the aircraft’s nose is pointing and where it’s actually going over the ground. However, a track bug replaces the familiar heading bug when the autopilot is flying in GPS ground track mode.

Anytime a GPS is being used as an HSI source, the HSI D-bar (CDI) is colored magenta. When a VHF radio is being used as the source, the D-bar is green. A text label verifies what data source is displayed, and each GPS or radio source is numbered to prevent confusion in systems that have multiple devices. The NAVSRC softkey on the PFD selects the source. Skyview connects to a variety of remote nav sources, including the GNS430/530 series using the ARINC 429 adapter box.

Virtually Real
Synthetic vision is practically required for a glass panel, and Skyview presents it well on those big, crisp displays. We won’t cover the specifics of synthetic vision here to save space, but Skyview does a decent job of playing the familiar flight path marker (depicting the actual trajectory that the aircraft is flying through space), synthetic runway and surrounding environments—painted an eye-catching yellow or red as they become a threat.

The Skyview comes standard with a basic topographical map display that shows advisory terrain color-coding and basic active waypoint information when driven by an external GPS. But the addition of Dynon’s $200 GPS module and one-time $500 Navigation Mapping Software adds an advanced embedded GPS navigator function and an extensive aviation database for interactive on-screen navigation. When we asked Dynon why this wasn’t included as standard, they noted that most Skyview suites share space with a dedicated GPS the likes of a Garmin 696 or aera796, and owners want the option to save some money. We think it’s a worthy option given the price, but heartily appreciate Dynon’s frugal-owner thinking.

Mapping is accessed through the MAP softkey and, if the software is enabled, you’ll get a complete aviation and obstacle database that displays airports, runways, navaids, airspace, obstacles and other aviation data on the moving map. Advanced mapping functionality enables Skyview to provide detailed information about aviation features and on-screen navigation to these features.

Speaking of data, SkyView utilizes terrain, obstacles and navigational databases that are, refreshingly, provided by Dynon for free right on the Dynon web site. See if you can find such a deal in the certificated avionics world. Data is easily downloaded to the system utilizing USB ports in the rear of the display. In SkyView systems that have more than one display, databases are automatically synchronized.

There’s also an interface for the Vertical Power VP-X electrical monitoring. Further, the installer can custom-configure the engine gauge presentation and location of the gauges on the screen.

Keeping the integration ball rolling, Dynon offers two remote transponders that can be remotely controlled from the PFD in a dedicated transponder window. This saves space in the radio stack, adds another level of integration and streamlines the installation because SkyView feeds computed pressure altitude direct-ly to the transponder, eliminating the need for a separate Mode C altitude encoder.

Dynon’s 262-series is a Class 2 Mode S transponder that is limited to ops below 15,000 feet, under 175 knots—and outside the U.S. Use the 261-series unit otherwise. When connected to a capable GPS, the units will output ADS-B through 1090ES.

Envelope Protection
One Skyview function that tickled our fancy was the optional display of instantaneous G-loads on the airframe. Eyeball the airframe of some of these puny LSAs (especially the aerobats) and the G meter could be your most used feature of the Skyview. When it’s displayed, it replaces the HSI (a numerical magnetic heading value remains on the screen). The G meter shows an analog “needle” that indicates the instantaneous G loading of the aircraft.

Depending on how the G meter is configured, the analog range may have yellow and/or red caution ranges configured to visually indicate aircraft G limits are being approached. Further, the meter can be configured to appear automatically when G loads exceed a preselected threshold. An angle of attack indicator will display on screen when a Dynon AOA/pitot probe is installed.

To avoid airframe (and pilot) overstress in the first place, SkyView paints big, red horizon-pointing arrows on the PFD at pitch attitudes of ±45 degrees. Indicators are accompanied with a small piece of sky or ground bordered with a white dashed horizon line, depending on the current attitude. The pitch warning indicators can be enabled or disabled through the setup menus.

Like most GA glass panels, the attitude display leans on airspeed input to ensure accuracy. In the event of pitot blockage and loss of airspeed, Skyview will show a magenta GPS ASSIST message on the PFD, and the ground speed is displayed below the indicated airspeed slot. And if the electrical system itself goes south, an optional backup battery can power one SkyView display (but not the autopilot) for at least 60 minutes.

Conclusion
An entry-level Skyview has a starting price of $4800. (No, there’s not a zero missing from that number. But remember this is LSA and experimental aircraft only.) A full suite with dual screens and autopilot servos can top $12,000.

As impressed as we are with the Skyview, there are some nits to pick. As we go to press, Skyview doesn’t have satellite weather or electronic charts—features that might be seriously lacking for most buyers that expect it in a system of this caliber. Dynon says it’s holding off on these features to perfect the interface.

On the plus side, we’re impressed with display quality and autopilot automation and the ability to play data in various configurations. Whether or not this type of automation and advanced equipment makes sense in a stay-local, VFR-only LSA is questionable, although manufacturers we spoke with all seem to agree that buyers want integrated glass and lots of it.

From what we see, with Skyview they’ll get just that, and with a performance and price that will leave certified-panel owners drooling.