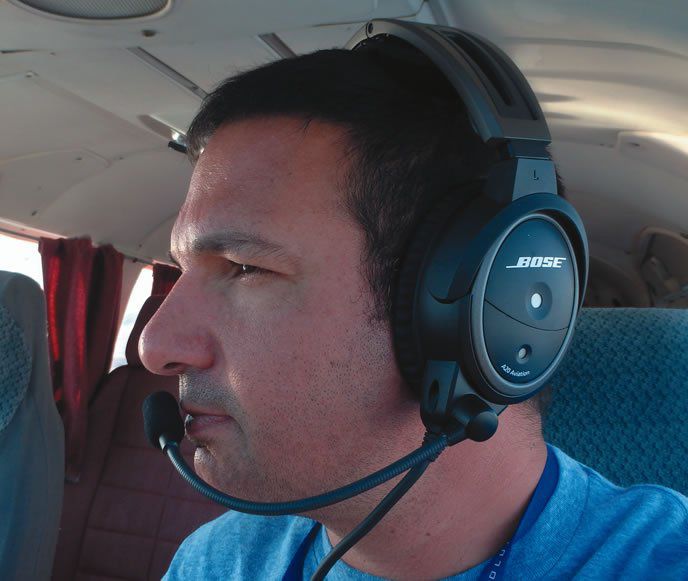 If you’re looking for Bluetooth connectivity for entertainment and tablet app interface, you don’t have to spend big on a major audio system upgrade. Consider that a full-up GMA350c audio panel interface could easily top $5000 for an average installation. That’s a hefty price to pay for Bluetooth connectivity. As an alternative, you might try connecting your devices through a Bluetooth headset, including the updated Bose A20. While the enhanced A20 isn’t a new model (it was introduced five years ago), the set now gets the Bluetooth capability the market expects—including wireless music streaming. The only way to listen to music with the previous version was to plug it in via stereo patch cable. Unchanged is the A20’s 12-ounce top end, including its fit, finish, ANR audio performance and comfort. New to the A20 is a redesigned control module, which requires swapping the interface cord (also called the downcable.) The downcable also has a new microphone in favor of an improved and more adjustable one, which can be attached to either earcup.

The ANR module on the replacement downcable houses a modernized Bluetooth system, supporting a variety of Bluetooth profiles including A2DP, or advanced audio distribution profile. That means you can finally stream music audio and navigation app data alerts from a tablet or smartphone. Once connected, you can do a lot more with those sources, too. The headset retains the mute and mix prioritization function, which will either mute or mix an auxiliary audio source when there is intercom chatter present, but the updated A20 takes it one step further. It allows you to prioritize and manage multiple secondary audio input sources.

For example, while you might have two Bluetooth devices paired to the headset at one time—plus a wired aux input connected—you can select which of the two Bluetooth devices has priority over the wired input. Perhaps terrain or traffic alerts from a tablet app should have priority over background music, as one example. Essentially, the system has some smart functionality that you would expect from an advanced audio panel.

“If you think of this audio input prioritization as a totem pole, the most important thing is at the top, which is intercom audio. The next device down the pole is a cell phone, which may always be present in the background. Then it’s up to you to decide what the next prioritized device is going to be,” said Bose’s Hratch Astarjian during a demo at AirVenture, where the enhanced A20 was introduced.

Setting the source priority is accomplished with the BT-AUX switch located inside the battery compartment. Simply slide the switch to the correct source to set the prioritized device. When the switch is in the BT position, the Bluetooth audio source will override the auxiliary input source when a Bluetooth signal is detected. Similarly, when the switch is in the AUX position, the auxiliary source overides the Bluetooth source when an auxiliary signal is detected.

The updated downcable also brings better power management, including automatic power-up when the single panel-power plug is used for ship’s power. No more forgetting to turn the ANR circuitry on when you plug in as we’ve blundered with for years.

While the enhancements will be standard on all new A20s, the upgrade to existing A20 headsets is easily accomplished in the field. Two screws release the old boom microphone and the downcable assembly from the earcup. Simply plug in and secure the new downcable and microphone to whichever earcup you wish and reattach the screws.