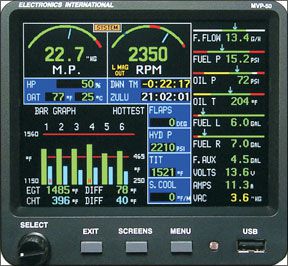 older airplane is like ours, its powerplant and electrical system gauges resemble what was left behind on the factory floor when GM built its last 1937 Buick. Until recently, though, if we wanted to upgrade our factory instrumentation from what Beech or Cessna decided was adequate, we were stuck figuring out how to install round or square gauges from companies like UMA and Mitchell into rectangular holes. Those gauges are excellent products, but feature few bells or

whistles. And few aftermarket engine monitors are equipped or approved for the primary-read “only”-display of information like oil pressure or how much fuel remains in the left tank.

Thanks to offerings from Electronics International (EI), J.P. Instruments (JPI) and Xerion, we can-now or in the very near future-buy new, FAA-approved engine instrumentation systems that offer the latest in software and processing displayed on whats the latest trend: large format color screens.

Experimental aircraft builders have even more choices. The only real issue should be a familiar one to owners: how much to spend and how often will this new gadget divert attention from looking outside the airplane. Thats after you decide where to put it, of course.

We last looked closely at engine monitors in our September 2004 issue. Parameters like EGT and CHT, fuel flow, oil temperature and turbine inlet temperature-along with RPM and manifold pressure-can be displayed on these gadgets in digital or graphic form. Generally, the data is stored in onboard memory and can be downloaded to your PC-perhaps not as seamlessly as you might like-and massaged, graphed and examined as much as you want.

Since that last look at engine monitors, not much has changed in the low- and mid-level offerings. Theyre still necessary, in our view, if you want to run your engine lean of peak EGT or if, like us, you care about knowing the CHT of each cylinder banging away up front. Factory new piston airplanes equipped for cross-country work generally have monitors as basic equipment these days, and often their functionality is built into the glass panels from Garmin and Avidyne.

Changes that monitor manufacturers have made since 2004 generally are in grudging acknowledgement that time marches on and older technology-except in general aviation-is left behind. For example, J.P. Instruments popular EDM-700 and -800 series formerly provided a relatively slow and cumbersome RS-232 serial port as the sole means of retrieving the units data. But try to buy a new laptop these days with a serial port.

Now, JPI has an adapter: Plug one end of the adapter into the serial port and stick a USB thumbdrive into the adapter. Amazingly, Insight Instruments still uses an infrared interface limited to speaking with a palmtop computer long out of production.

While the low- and mid-range monitors remain relatively unchanged, the newer products-Electronics Internationals MVP-50, JPIs EDM900 and EDM930, Vision Microsystems VM1000C and Xerions AuRACLE I and II-combine the multi-channel brains weve come to expect with larger, color screen multi-function displays. Think of a Garmin GNS530-size screen dedicated to keeping tabs on your engine and systems instead of your navigation, and you get the picture.

Theres some software involved, of course, as well as FAA approvals to use the boxes as primary instruments in certificated aircraft. Not all of these big-screen boxes have those approvals; those lacking it are relegated to Experimentals or OEM installations. Getting one with the Feds sign-off allows you to yank out, tape over or simply ignore your original factory gauges. With exceptions, about the only thing these boxes wont do-for now, anyway-is replace your factory fuel gauges.

If youre flying an Experimental, you can get even more functionality. For example, the big-screen color monitors can handle the fuel gauge issue with ease; all you really need to do is calibrate them for your sensors and tanks. Depending on which manufacturer and model you choose, other functions can be added. For example, EIs relatively new MVP-50 allows custom screens of data like checklists and flight plans, if you choose.

But getting an FAA TSO for the basic hardware is one thing; getting it customized and approved for specific aircraft is another. This includes simple things like allowable oil temperature ranges, but can quickly get esoteric: Some aircraft have

various caution ranges imposed on tachometers or other instruments. Getting all that right down to the specific airframe can eat up a lot of development dollars.

For those of us flying certificated aircraft and wanting more automation from our basic instrument panels, not all the news is bad: The big-screen models already can do more than the 37 Buick gauges we may have. For specs like price, size and memory capacity of both big-screen and smaller, traditional engine monitors, refer to the table at right. Meanwhile, lets take a look at what big-screen models are offered, what they do and how they do it.

The MVP-50 big-screen engine monitor is a great example of the promise this high-end market segment holds. It does everything the companys standard monitor, the UBG-16, does but thats where the similarities end. EI bills this product as a “glass panel engine monitor and in-flight information system,” hinting at its flexibility in the areas of fuel management and systems monitoring.

Other things it can do include providing a customized checklist, performing weight and balance calculations-an out-of-CG condition you program will show up in red-and displaying aeronautical data. Some of this will have to be programmed, but the boxs front panel features a USB port for uploads.

The list of various parameters tracked by the MVP-50-elevator and aileron trim position, for example-is much longer than we have the space to describe. That flexibility comes from EIs building into the unit the capability to track, log and display just about any analog input imaginable.

The only thing it appears the MVP-50 cant do is handle a twin-engine aircraft. Only Xerion among the big-screen monitor makers says its planning a twin version. Again, though, when the MVP-50 for certificated aircraft owners is available early next year, some of this flexibility may be disabled at the FAAs behest.

J.P. Instruments has long been a household name among owners, with its EDM-700 and -800 simply referred to as “JPI:” If youre serious about piston-engine monitoring and management, youve heard or use JPIs products. Meanwhile, its –

900 and -930 models have quietly staked out a beachhead in the big-screen market. The EDM-900 uses a larger version of the -700 and -800s 2.25-inch orange plasma screen. As such, its a monochrome product; the displays colors are silkscreened on. The EDM-930, meanwhile, uses a full-color screen. Both use the basic hardware and software of the EDM-800 and add features from there. Both also are capable of displaying fuel quantity, the only big-screen monitors carrying FAA approval as primary instrumentation with that ability. For now.

The two JPI big-screen products have been out for a few years; when they came on the market, they were the only big-screen game in town for certificated-aircraft owners and their price reflects it: A six-cylinder primary-approved EDM-930 will cost $9800, before installation. Now, however, it seems JPI has some competition and it will be interesting to see what happens with their pricing.

Xerion is the new kid on the block, although its founders have substantial experience developing aircraft engine instrumentation. The companys first products are the AuRACLE I and AuRACLE II big-screen monitors, both of which are TSOd and approved as primary engine and system instrumentation.

With one exception, the AuRACLE I is pin-for-pin compatible with JPIs small-screen EDM-700 and -800. Its the choice for owners who already have a monitor and want to upgrade their panels with one device displaying all aircraft system parameters. The exception to the AuRACLE Is wiring involves the pressure sensors designed for the JPI products, which wont work with it. Instead, Xerion uses a TSOd digital sensor manufactured by UMA.

The AuRACLE II, meanwhile, provides the same capability and TSO but is designed for new installations. It connects to the aircrafts systems through an engine interface unit, or EIU, typically mounted under the cowling. Instead of directly plugging all the EGT and CHT leads to the back of the display unit, theyre connected to the EIU.

Xerion received FAA approval for its products to serve as primary instrumentation earlier this year. Its STCs approved master list of eligible aircraft was recently expanded, and you can look for its products to appear as original equipment in at least two brands of certificated aircraft.

We wouldnt hesitate to install any of the big-screen products from these three manufacturers in our certificated airplane, once the FAA finishes sprinkling holy water on them all, anyway. The real trick will be the physical installation: Finding panel space, making and routing all the various connections, configuration for specific airplanes and debugging. Installation costs can easily exceed the cost of the hardware. Because these products havent been fully fielded for long, well make some broad-brush recommendations only.

If we were installing in an Experimental, EIs MVP-50 hands-down would be our choice. We may not need to know aileron trim position, for example, but the sheer number of possibilities it presents appeals to our tinkering side. If youre flying a twin, youre out of luck for now, although Xerion says its twin-engine version is due out in the spring. Well revisit both of these in another year. Were confident JPIs 900 and 930, on the other hand, will do the job. And, if using your new big-screen monitor as an approved fuel quantity indicator is a requirement, the EDM-900 and -930 are the only big-screen games in town right now. JPI appears to have the largest number of certificated airplanes on its FAA-approved model list.

Of the choices, Xerions AuRACLE I and II may turn out to be the most robust, since they were designed from the ground up with not only primary certification but expansion and OEM applications in mind. Until we can test each of them in the field, however, well hold off picking one over another.