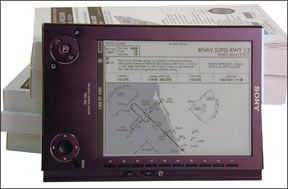 Blame it on Elrey Jeppesen: If he hadnt invented what has become the modern approach plate as a means of saving his own hide, we wouldnt be up to our shoulder harnesses in paper charts today. Approach plates from the FAA alone occupy 24 bound volumes averaging an inch thick for full U.S. coverage. And even if we can display approach plates on panel-mounted avionics, the Luddites among us also carry some paper charts, guarding against the day (or night) that all that expensive equipment soils the bed.

And still, the industry toils mightily to devise the perfect electronic solution to allow us to ditch the paper. Thats the easy part. Choosing from among the many hardware and software options for displaying electronic charts and picking the best one is tough and no one has hit the jackpot yet. A recent entry is what well call the inexpensive electronic flight bag or EFB and its called Reader Plates. It uses a Sony electronic paper platform, the idea being to keep costs low.

Reader Plates uses Sonys PRS-505 e-book hardware to display the entire collection of more than 13,000 approaches, arrivals, departures and other pages in the FAA/NACO instrument approach procedures database. Reader Plates converts the charts into a downloadable format for either Windows or Macintosh and the user can then transfer it to the e-book reader via USB. Youll need a solid broadband Internet connection to be able to download the data file from Reader Plates, which amounts to 1.3GB.

Every 28 days, when charts are updated, users have the option of paying $9.95 for the most current data or skipping the download altogether. Its all or nothing. You cant obtain, say, procedures for a single state or region. Thats by design, since one of the main ideas of doing away with paper plates is the ability to have all the procedures at your fingertips. And, unlike some other EFB solutions, the charts dont expire or otherwise become unusable after a period of time. If you already own a PRS-505-sorry, Reader Plates isnt available for other e-readers-youre golden.

Overall, the PRS-505 is about the same height as a bound book of NACO plates, but slightly wider and only 0.3 inch thick, or 8 mm. With its built-in Lithium-ion battery-but without its book-like leather cover-it weighs only nine ounces. Clearly, carrying one of these wont impact your useful load and, if you cant find room for it in your flight bag, youre doing it wrong.

Along the right edge of the device is a vertical row of keys used to navigate the data, along with a pair of buttons used to “turn” pages backward or forward. At the

bottom, a series of keys are dedicated to bringing up the system menu, zooming in and out, duplicating the page-turning buttons and selecting menu items. All keys provide tactile feedback and seem sturdy enough to stand up to cockpit abuse. Overall, the unit is well-made.

The screen measures 6 inches on the diagonal, which works out to 3.57 inches wide by 4.82 inches high, or 600 by 800 pixels, a bit smaller than an FAA/NACO approach plate page. It uses the so-called e-ink technology, which consumes power only when the display changes. Sony says a fully charged PRS-505 is good for some 7500 display changes or page turns. In our testing, we let the unit display a plate for several days; it never exhausted the battery. The screen displays eight grayscale levels at 170 dots per inch. By comparison, a Garmin 430 displays eight colors at 72 DPI. A night mode inverts the displays grayscale shading, but youll need an external light on the screen to view anything at night, which can be a disadvantage.

We took a PRS-505, loaded with Reader Plates data, flying with us on a sunny day. We also brought along a Garmin 696 and a Samsung Q1 loaded with the FAA/NACO instrument approach procedures database and search engine. When we last looked at EFB hardware solutions in May 2007, we found the Q1 to be the best-performing tablet PC for the cockpit. Since then, weve been using the FAA/NACO software and find the combination to be a good solution. All devices displayed plates clearly, even in bright sunlight, the Q1 having the most trouble. The table above summarizes the three products.

The first challenge we faced was coming to grips with the steps each devices user interface requires to bring up an approach plate. We found that the 696 brought up plates fastest and with the fewest button pushes. Then, we zoomed in and out, making sure we could read even the plates fine print. Here we encountered a Reader Plates drawback.

Since the PRS-505 doesnt scroll its screen, and the default document size is substantially smaller than the paper version, Reader Plates split the electronic file into two parts, an upper half and a lower, to provide the needed additional detail. Switching back and forth between the two isnt cumbersome, but does require a wait after pressing the appropriate key before seeing the results.

More problematic, however, the results are displayed in landscape mode while the

full, smaller-scale plate is displayed in portrait mode. This means the PRS-505 must be rotated 90 degrees in one direction to view the large-scale display, then rotated back for the small-scale version. Not so bad if youre holding the thing in your hand, not so good if its yoke mounted.

Which brings to mind the big challenge: where to put it. Thankfully, a RAM mount accommodates the Q1 and one is supplied with the GPSmap 696. The PRS-505 is more problematic. We solved this problem with a so-called flight desk from Autel, mounted to the Debonairs throwover yoke, along with some self-adhesive Velcro. Still, there needs to be a better way to do this. (RAM, are you listening?)

Of course, rotating the PRS-505 for its large-scale view is hard to do when its Velcrod to the airplane and another reason a ball-and-clamp RAM mount might be a good solution. Instead of mounting the device in the cockpit, we treated it as another cockpit accessory to be stowed in a map pocket when not needed and held in the hand when it is. Alternately, you can Velcro it to a yokeboard and simply hold it when you need to see the larger screen. A compromise? Yup. But what do you expect for $300?

Reader Plates is a good, inexpensive solution to the problem of keeping approach plates in the cockpit. The devices small size and weight, along with its readability and low power consumption combine to make it worth considering. This is especially true if its treated as a belt to the suspenders of keeping paper copies of the most-likely approach procedures in the cockpit and using Reader Plates to ensure you have the data necessary to shoot an approach anywhere in the U.S. Its not perfect, though, for two reasons.

First is the size of the monthly download. At 1.3GB, even a fast broadband connection will take some time to complete. On dial-up, or from a hotel room on the road, forget it. While most Internet providers these days dont care how much you download, some still do, and charge accordingly. Be sure to factor in your Internet connection when evaluating Reader Plates.

Second, the PRS-505s inability to zoom and pan is a problem. Reader Plates solution is to split the screen in half and force you to rotate the device to view plates large-scale. For casual use, thats okay, but it could become a nuisance in a busy cockpit.

On the plus side, the $9.95 update price is about as good as its going to get, especially if you already have a PRS-505. The device is light, easily viewed in even the brightest cockpit, and a charged battery should last for days, not hours. Its the sort of product you could easily buy, stuff into your flight bag and forget about until the kind of dark and stormy night that got Elrey Jeppesen thinking about standardized ways to get in and out of airports in bad weather.