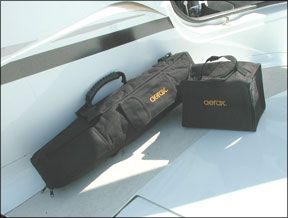 et serious use of a personal airplane requires climbing far above pattern and practice altitudes where the air is thinner and true airspeeds peak. That, more than anything else, may explain the veritable explosion in complete, state-of-the-art portable oxygen systems and the accessories that go with them. If your airplane doesnt have built-in oxygen, and the time and money to add it isnt in the cards, youre a prime candidate for a portable system. Total cost for a two-user system? Under $500. But if you usually carry more people or need a few bells and whistles, things start getting complicated: The choices available from some vendors can be almost as dizzying as five hours in the teens without O2.

In the January 2008 issue, we examined in detail new accessories such as

regulators and cannulas, but we skipped discussing full systems. So in this article, were considering the whole enchilada, so to speak-complete, in the box systems. Since we last examined this topic five years ago, the market has become more competitive and there are some excellent values out there.

A basic portable system includes a cylinder, a regulator, some method of measuring and controlling oxygen flow, a cannula or mask to deliver it and hoses to connect it all together. Cylinders are probably the most ubiquitous component, since the vendors we surveyed all offer the same basic sizes, measured in either cubic feet or liters. And size matters, since larger cylinders offer greater duration and fewer refills. Depending on cylinder size, we can breathe happily on a coast-to-coast round-trip without a refill.

Most cylinders available from the vendors we surveyed are aluminum and come in standard sizes, ranging from six cubic feet or smaller to 24 CF. Precise Flight offers a 22 CF M-size cylinder with its systems; other sizes are by special request.

Higher-capacity cylinders are available, including a whopping 50 CF steel bottle from SkyOx. Mountain High offers a Kevlar-wrapped product capable of 115 CF along with silica- and carbon-fiber-reinforced cylinders allowing higher pressure and greater volume.

The drawbacks are weight and cost: The 50 CF whopper from SkyOx checks in at a portly 33 pounds-smaller aluminum ones weigh 10 pounds or less-while Mountain Highs 115 CF Kevlar-wrapped cylinder lists for $1500 without a regulator. The only real issue weve found with larger cylinders-O2 doesnt go bad if you dont use it-is where to mount and store them. For tight cockpits or solo use, smaller cylinders might make more sense.

Regulators reduce the 1800-plus PSI maximum pressure inside the cylinder to something more manageable. A constant flow/fixed regulator is basically an on or off valve. Once its turned on, oxygen constantly flows to a metering device, demand regulator, or straight to the mask/cannula. Regulators can also be adjustable. (See the January 2008 article for more detail.)

An adjustable-flow regulator eliminates the need to use a downstream flowmeter. These regulators, available from Aeromedix.com and SkyOx, allow setting the flow to altitude or liters per minute (LPM), depending on the device. (FAA guidelines recommend one LPM per 10,000 feet when using a mask/standard cannula or .5 LPM per 10,000 feet when using a conserving cannula.) The drawback of more than one person using an adjustable-flow regulator is everybody downstream of the regulator sees the same oxygen flow whether they need it or not.

Enter the flowmeter, most examples of which use a small ball in a graduated clear plastic chamber to measure flow while a built-in needle valve is adjusted to decrease or increase it. The vendors we surveyed supply either an A-3 or A-4 flowmeters-Mountain High labels theirs as the MH-3 and MH-4. The former is calibrated for the industry-standard Oxymizer conserving cannula up to FL180 while

the latter can also be used with a standard cannula or mask up to FL250.

One vendor, Aerox, takes a slightly different approach. Instead of combining the metering and measuring, the company uses a machined-brass needle valve built into the hoses regulator fitting. An in-line floating ball displays how much O2 is flowing. Another vendor, Precise Flight, uses the newer A-5 flowmeter, which we looked at in January and liked more than its older siblings.

Aeromedix.com offers a completely different flowmeter, machined out of a solid piece of acrylic and marked in liters per minute. Its heavy and has relatively sharp edges, but its a work of art. Its also better made than others weve seen and likely is all but immune to breaking when someone steps on it climbing in or out of your plane.

Before cannulas were adapted from the medical industry, the only way to deliver oxygen was via mask. Older masks were hot, uncomfortable affairs, usually lacking a microphone (which often wasnt a problem because few of us used headsets back then, anyway, in favor of a handheld mic).

Recently, the conserving cannula was put into aviation service, using a small reservoir either built moustache-like into the device itself or as a pendant. Regardless of the design-and SkyOx is the only vendor we surveyed with pendant-style cannulas as standard, although Mountain High offers them, also-the idea is the same: Use the reservoir to mix ambient airs oxygen with some from the cylinder, minimizing the need to buy the stuff.

Cannulas allow oxygen delivery directly to the nostrils, freeing up the mouth for eating, drinking and talking. Theres only one issue: Theyre not FAA-approved above FL180. Any higher and the FAA wants you using a mask, even if many pilots we know get away with using a cannula that high and higher. The cannulas available from the vendors we surveyed are all basically the same Oxymizer brand products-SkyOx excepted, of course.

Meanwhile, most masks are simple, clear-plastic devicess known more for their low cost than comfort or performance. Also adapted from the medical industry, they dont have microphones-more than one pilot has poked a hole large enough to slide in his headsets boom mic to solve that shortcoming-and we generally would

consider them for light-duty use only. All vendors we surveyed included at least one of these masks with their portable systems, presumably to ensure legality in the flight levels.

If we were planning to spend much time above FL180, wed bite the bullet and get a different mask. Mountain High ($350), Precise Flight ($385) and SkyOx ($378) offer as an upgrade a more-robust, mic-equipped mask made from a quality silicone material. Aerox ($396) offers a TSOd mask, which the company says has been more thoroughly tested than its competitions.

Putting It All Together

Even on those rare occasions when all four seats are filled, the FAA only requires oxygen is provided to non-crew when above 15,000 feet, not that they use it all the time. Regularly flying your family over the Rockies with a turbocharger might make the choice between a two- or four-person system academic, of course. And six-place portable systems are available from Aerox and Mountain High. The bottom line is its rare for us to need anything more than a two-place system.

The next big decision is cylinder size. We like the so-called E, or 24 CF size. This cylinder can be a pain to maneuver in and out of the airplane, but wed rather have more oxygen aboard than less, especially on a multi-day trip when getting refills can be problematic and expensive.

Where youll stash a portable cylinder in the cabin is important, also. Our E-size cylinder has a relatively small diameter, but its tall. Nevertheless, it fits into a lot of places, including on its side on the floor or wedged between the rear seats. Not an ideal solution, but it doesnt bounce around in turbulence and we can reach it easily.

Some vendors include a case; its optional with others. A carrying case with straps for mounting to the back of a seat is a worthwhile part of any portable system. Just remember that you might not be able to reach it without some mid-air contortions.

Since the vendors we surveyed basically offer the same cylinders, cannulas and masks, were left to consider regulators, flow meters and the carrying case offered, if any, when deciding which the best choice is. Since most of these components are industry-standard commodities, the only real variable becomes price.

In our view, Aeromedix.com has the best deal going on a complete portable system using the E-size cylinder, which we prefer, a constant flow/fixed regulator. At only $495 for the two-person version, plus $25.95 for the carrying case, Aeromedix.com hands-down beats out all the other vendors, plus you get their virtually unbreakable flowmeters in the bargain.

SkyOx comes in a close second but uses an adjustable-flow regulator (Aeromedix.coms price on a two-person system with adjustable regulator is a rock-bottom $390.95). Since the control freak in us demands individual metering, wed be better off going to either Aerox (if a carrying case isnt necessary) or Precise Flight (if it is) for a two-person system if Aeromedix.com didnt make the cut.

For a four-place E-cylinder system, SkyOx has the best price, if you dont mind an adjustable-flow regulator or pendant cannulas. If you need individual flowmeters, Aeromedix.com edges out SkyOx once two or more of them are added to the total. And Aeromedix.com uses the moustache-type cannula, which we prefer.

At only $20 more, Precise Flight is effectively in a dead heat with Aeromedix.com on pricing a four-place system. The only real differences are the number of masks provided-which youll probably never use. The agony will be choosing between the two really slick flowmeters offered.

If you have special needs, or want some trick gear to ensure your oxygen systems comfort and utility, Mountain High probably has what you want. Athough their two-place system was the most expensive we surveyed, their four-place system with moustache-style cannulas comes in right behind Aeromedix.com and Precise Flight.

If you fly much at all these days, youll probably spend more on fuel in a year by avoiding the higher tailwinds at altitude than one of these systems costs. Considering the safety benefit and prices, theres just no excuse not to have a portable oxygen system aboard.