There’s a new lightweight headset in town, one developed by pilots for pilots—specifically, experimental pilots. The CQ1 is an evolutionary step in the development of the ultra-lightweight, in-ear headset that has become popular in the experimental world because of the freedom you get without big bunny ears—and in bubble canopies, it makes it easier to wear a Boonie hat to keep the sun from burning your ears off.

I got a chance to put one into our regular rotation of headsets and found that it’s a lightweight, in-ear model that has it right. Here’s a closer look.

The CQ1 headset by Card Machine Works was developed by Scott and Tanya Card, who have talked around a lot of campfires about how other in-ear headsets could be improved upon. Ultimately, they felt they could build a better mousetrap, and a few years ago ultimately and quietly introduced the CQ1 within the Van’s RV homebuilt community.

If you really think about it, the perfect headset is hard to define because, frankly, it isn’t a “thing” so much as it is an idea—and that idea is actually nothing at all. What we’d like in a headset is something that delivers crisp, clear communications (in both directions) while giving us good hearing protection, while still allowing enough ambient sound so that we know what our airplane and engine is doing. Of course, we have no tolerance for discomfort—the perfect headset should feel like nothing at all.

Headset design has come a long way since the earliest carbon-element headphones that sat over the ear but provided no noise protection. Then came passive noise-canceling headsets, where the gold standard for many years was David Clark—green and rugged. But, oh, the clamping pressure on the head!

Along came active noise canceling—the gold-standard technology we’ve grown accustomed to that listens to the ambient noise and uses the speaker element to cancel it outright at your ear. Conceptually an attractive solution, it’s sometimes amazing that it actually works—and works well. But it still has a set of cups on top of or over the ears and a band across the top of the head (in most cases), and that makes it hard to wear that Boonie hat.

So along came the in-ear headset with a lightweight band around the back of the head and soft foam or rubber earpieces that blocked out ambient noise. There have always been cheap versions of this design, but several brands of quality headsets (the Faro Air, QT Halo and the Clarity Aloft are three popular ones) have now been around for well over a decade. Their designs have remained pretty much the same over those years, with some complaints about the ability of the boom mic to stay in position, plus some questions on durability related to the positions of speaker elements (which differ among products). Enter the CQ1. 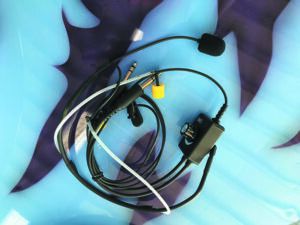 The CQ1 was designed by pilots who had extensive experience with both the Halo and the Clarity Aloft, and specifically targeted the issues they had personally experienced with the designs. The CQ addresses the issue of microphone motion, and the quality of the audio was improved to the point that it sounds like you’re sitting in a quiet jet cockpit enjoying a soft conversation with pilots and controllers who might or might not be in other airplanes or control rooms—it’s just conversation.

My stable of headsets includes both of the previously mentioned quality lightweights, so it’s easy to make direct comparisons. Out of the box, the CQ1 shows quality construction, and the headband/microphone support seems beefier than the other lightweights. 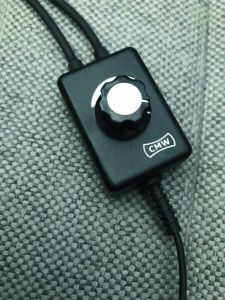 Once I put it on, this proved to be the case—the microphone stayed exactly where I put it. Although it fit my head just the way it arrived, the Cards say that it is easy to rebend the portion of the band that wraps around the back of the head to accommodate individual wearers. My wife found that the band sort of stayed away from the back of her head, which made the microphone a little less stable. Rebending the headband to make it sit more closely would solve this, according to Tanya Card, and she was right.

The quality of the build extends to another complaint people have about other lightweights—the control box. The Cards have built a nice small box that just seems to work. It has a single volume knob that is solid and allows volume adjustment without skips or bad spots in its range of travel. I have experienced problems with the control module on other headsets, and it is frustrating to have dead spots (or non-linear adjustment) on either the left or right (or both) channels so that you can only set it either too loud or too soft. Not a problem so far with the CQ, and speaking with users who have had a CQ for many hours it doesn’t seem to be a problem for them, either.

I believe that a headset is only as good as it sounds—to others and to you—and the CQ does an excellent job in bringing living-room quality sound to the cockpit. The speaker elements are mounted to the headset band, and small surgical rubber tubes go from there to the earpiece in each ear. I like this design because the speaker elements are fairly well protected against abuse by the wearer. In any case, the set has excellent speaker drivers, and the sound is full and clear. The microphone is also quite clear and not spiky in its sound—it is all clear and understandable, as mentioned before. It also stays right where you put it and doesn’t move around with G’s or while looking around for traffic or while maneuvering.

But what about active noise canceling (ANC)? Isn’t that important? I have seen studies that show that a passive headset with well-fit foam or rubber earbuds can actually protect your hearing almost (or just) as well. If you’re flying something that routinely puts 120 dB of sound at your eardrums, it might be important to go for the maximum hearing protection you can get—ANC plus foam earplugs. But for the average RV or bush plane with a Lycoming spinning a prop up front, I find that the tradeoff of having a lightweight headset is worth giving up my ANC ear cups. I like having the ANC headsets more because of the convenience of pulling them on and off when operating a bush plane, and they can be easier for a passenger to use—but for all-day flying in an RV, I will forgo the ANC and pick the lightweight every time.

Finally, the issue of having “something in your ear” always comes up when talking about lightweight headsets—and yes, it is something that either works for you or it doesn’t.

Anecdotally, just asking around the campsites at AirVenture, I have found that most people can tolerate foam earplugs fairly well, and that is what you are wearing with a lightweight headset. Yes, there are folks who simply can’t get used to them, but if you try a lightweight and don’t like the foam in your ear at first, try to give it a couple of hours before giving up. Most people find that after that time, they no longer know they have them in, and the lightweight becomes a favorite ever after.

The base CQ1 has a starting price of $425 and comes with three sets of standard ear tips, a set of triple flange silicone ear tips, lapel clip, microphone cover and a mesh carrying case. It’s available in Dual GA aircraft plugs or a 6-pin Lemo-style connector. There’s a also a Bluetooth version, which starts at $675.

I spent most of my life wearing a Plantronics Star Set while tethered to a console in NASA’s Mission Control center and got used to having good quality sound no matter if a person was talking from a few feet away, from a communications station a few thousand miles distant—or from a spacecraft on the other side of a planet.

The CQ1 gives me this same experience. If you’ve got good radios and a good audio panel, I’ve found the set to be a great match.

Contributor Paul Dye is the Editor at Large of sister publication KITPLANES Magazine, where a version of this field report appears in the November 2021 issue. An avid homebuilder, Dye is the retired Lead Flight Director for NASA’s Human Space Flight Program.