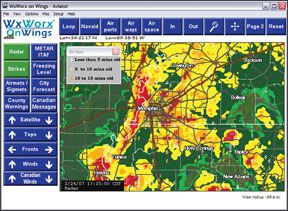 Datalink weather from WSI (Weather Services International) or through XM-based WxWorx, are far more alike than different. Even the pricing is identical for the basic and second-tier service, at $29.99 and $49.99 a month respectively. But close examination reveals a few key differences.

Remember that vendors, such as Avidyne or NavAero, decide how to display the data from either service in any manner they choose, and even what data to display. WSI (WSI InFlight) and WxWorx (WxWorx on Wings) both provide their own

software that displays all of their broadcast products, so thats what well use for our head-to-head comparison.

No Winner on NEXRAD

Ground-based radar is the cash cow of both services. Its high glance-value is the reason why pilots justify the fixed $30 or $50 monthly subscription. There is no clear-cut winner since both vendors broadcast a nearly identical ground-based radar product thatll tell you where you are likely to spill your coffee.

The image you see in the cockpit is not the same as the image found on the NWS web site. Thats because both WSI and WxWorx do a fair amount of data massaging before the image reaches your satellite receiver. Sometimes this quality-control step improves the image, and sometimes it eliminates real features.

For example, WxWorx uses a gross filter to eliminate any returns that are under 10 dBZ, which are usually not of significance to the pilot. However, this eliminates the presentation of gust fronts and outflow boundaries from thunderstorms, which often show up as low dBZ returns. WxWorxs also adds a step that eliminates ground returns in Canadian weather that look like storms but arent. WSI doesnt do anything about these returns, so a pilot using WSI Canadian radar may see nasty returns that arent storms at all.

Both radar mosaic images incorporate the high-resolution, short-range (124 nm) base reflectivity. WSI extends the coverage by utilizing the high-altitude, long-range base reflectivity. For those that fly beyond the U.S. border, this might be a slight advantage. We dont see this as a huge benefit, because only the most intense convective and tropical systems will appear

Other functionally equal products are winds aloft, en route advisories such as AIRMETs, SIGMETs and convective SIGMETs, infrared satellite mosaic, precipitation type and TFRs. The infrared satellite mosaic shows cloud heights at 5000-foot intervals using the cloud top temperature-colder tops are higher. Precipitation type (snow, rain and freezing precipitation) is a product that is uniquely derived by WSI and WxWorx, but because neither company will disclose their secret sauce for this product, its hard to objectively compare.

Datalink lightning is the next best thing to a spherics device such as a Stormscope. Here WSI leads in three ways.

WSI has a strategic partnership with United States Precision Lightning Network (USPLN) for lightning data. The technology from USPLN allows for the detection of inter-cloud and cloud-to-cloud lightning strikes in addition to cloud-to-ground

The resolution of the data is much higher with WSI. WxWorx lightning resolution is downgraded to a 4 km grid to keep the subscription cost down. This means that there could be 50 lightning strikes within a 4 km by 4 km grid box, and only one lightning bolt symbol will appear for that grid point. WSI shows you each and every stroke, and is reported with a precision of roughly .6 nm.

The next big ticket items are METARs and TAFs. Both provide a similar capability to see the full METAR and TAF. The primary difference between these two services is geography. WSI covers much of the North American continent including parts of Greenland, Alaska, Hawaii, Caribbean and northern South America. WxWorx only broadcasts the METARs and TAFs for the CONUS and Canada.

WxWorx also includes a forecast for surface fronts, troughs and centers of high and low pressure out to 48 hours. While WSI doesnt provide a similar forecast product, its hard to imagine how a forecast beyond 12 hours is all that important to have in the cockpit.

There are some products that are mutually exclusive. Lets take a look at these and discuss their relative value. WxWorx broadcasts a freezing level product depicting the MSL height of the lowest freezing level. WSI doesnt directly offer such a product, but does broadcast temperatures aloft on a grid from 3000 feet MSL through FL510. One freezing level is easy to interpret, but seeing multiple freezing levels can help you spot possible freezing rain in the winter.

Now lets jump back to the radar products. WxWorx broadcasts the echo tops product that are generated by the WSR-88D Doppler radars. This product provides the echo-top heights based on the highest elevation angles at which reflectivities greater than or equal to 18 dBZ are detected. This product is useful in identifying the most significant storms by locating the highest tops. Its important to note that this product does not identify the height of the cloud tops. Echo tops are referenced to MSL at 5000-foot intervals. We find it hard to imagine how helpful this will be to pilots flying below 18,000 feet.

Storm Cell Identification and Tracking (SCITs) markers, patented by WxWorx, identifies the location of potentially dangerous storms. SCITs markers are typically represented by lines or arrows originating from the storm cell centroid. A SCIT indicates the direction and speed of a storm cell exhibiting severe characteristics such as shear, large hail or heavy rain rate. They have the highest refresh frequency broadcast at once every 1.25 minutes.

While most SCITs look reasonable, some exhibit strange behavior, especially during the initial stages of development or when the cells are moving slowly. Its common to see two SCIT markers right next to each other showing movement opposite directions. Thats probably not accurate. Relying on this information for the direction of a specific cell isnt wise, especially if you see a lot of discrepancy. Due to their automated nature, SCITs tend to come and go. One may pop up and three updates later, its gone. Two updates later, its back again.

WSI offers a close cousin to the SCIT marker which is part of their radar summary product they call “echo top.” This is not the same echo tops product offered by WxWorx. The NWS WSR-88D Doppler radars produce a table containing vital storm characteristics such as storm tops, existence of hail and mesocyclones (storm rotation). From this table, WSI is able to display the location of significant storm cells.

Finally, WSI currently broadcasts PIREPs and the Current Icing Product (CIP) severity for subscribers of their premium service. They have other products for their premium service in development, including a graphic turbulence product. WxWorx has several new products in the works and will be annoucing a new package at Oshkosh. PIREPS will be added to the Aviator package.

Satellite datalink products will continue to grow in quality and quantity as long as the satellite bandwidth doesnt remain a huge issue as it is now. With that we expect the lead in this race will fluctuate between vendors. ADS-B also promises to deliver some of these same weather products without the monthly fee. Even at $50 per month, however, both products provide an exceptional value that has contributed to aviation safety almost as much as GPS. The days of getting your en route weather via flight watch, flight service or HIWAS arent dead yet, but they are surely gasping.

Scott Dennstaedt is a former NWS meteorologist specializing in weather and TAA training for pilots.