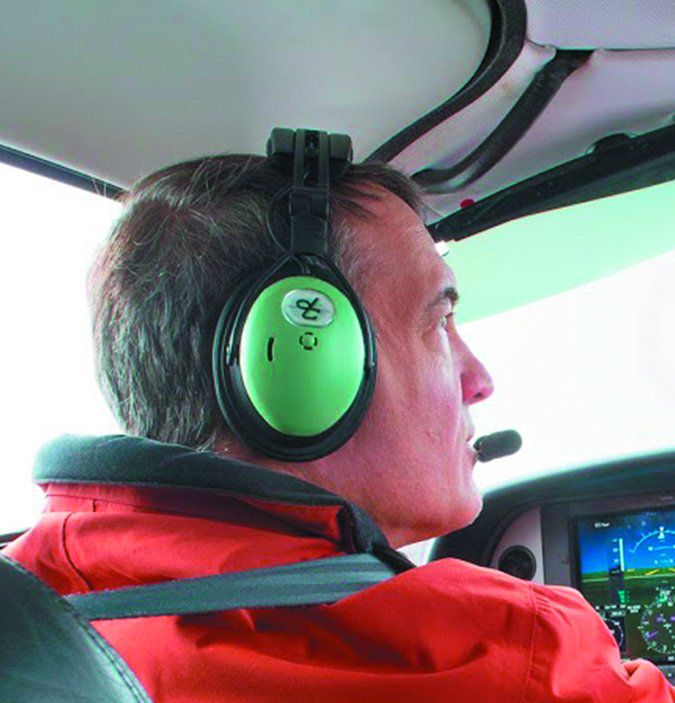 Afew years ago, the Pro-X-series aviation headset was a necessary shot in the arm for a mostly silent David Clark, a company facing fierce competition in a saturated market dominated by Bose and Lightspeed. With a street price under $700, the Pro-X appealed to remaining company loyalists who didn’t want to spend over a grand on a modern noise-cancelling headset.

Just in time for the fresh flying season, David Clark throws another noise-cancelling headset into the competitive market, the One-X. At first blush, the new model looks a lot like the previously released Pro-X, but it has major design differences that contribute to better performance, while affecting comfort. It also has a higher price. Let’s take a look.

Unlike the Pro-X, which is a supra-aural design (meaning the earcups sit on top of the ear), the new One-X is a circumaural model, designed to fit completely around the ear. Both designs create several compromises, especially in comfort and in ANR performance.

Not surprisingly, a circumaural headset is expected to perform better in the noise-cancelling department and we found that to be true. In our long-term ANR headset evaluation (October 2015 Aviation Consumer), we found the supra-aural-designed Pro-X noise-cancelling performance to be modest, failing to match the performance of the others in the roundup, including the Bose A20, AKG AV100 and Lightspeed’s PFX. But while it was somewhat lacking in ANR performance (it still performed well in low-frequency ANR signatures) it offered substantial gains in comfort. At 7.5 ounces, the Pro-X has low clamping forces, which is a non-issue with eyeglasses and ballcaps. It’s a different matter with the new One-X, and if you try on each set back to back, you’ll notice a big difference.

Part of that is the added weight. Since the One-X is nearly five ounces heavier than the Pro-X, it was obviously impossible for David Clark to design the same level of comfort into this new model. But there are some saving graces.

The One-X has a lightweight alloy headband that’s precisely adjusted for just about any head size. On a side note, we think the headset’s small frame makes it a good choice for children and for adults with small heads.

The headband offers generous tweaking, too. By adjusting each swiveling suspension stirrup, we found that you can accurately and evenly distribute the weight of the headset, which helps reduce fatiguing pressure points, but in our trials it didn’t exactly eliminate all of the pressure. We couldn’t help but compare the One-X’s comfort to the Bose A20, which we think sets the standard for comfort. On a comfort scale of one to 10, we rate the Bose A20 a nine and the One-X a seven.

However, compared to the Bose, we found that the One-X offers a better seal around the ear, especially when wearing eyeglasses—an area where tighter clamping forces pay off. We wore the set with three pairs of eyeglasses for comparison—the Oakley M-frame, Ray-Ban Aviator and the Flying Eyes sunglasses equipped with interchangeable thin temples—and found that the One-X had a better fit than the Bose. Our sense is that the cups—creating a tighter seal—resulted in better noise attenuation.

The other trait we like is that the One-X has incredibly soft leatherette ear seals, which David Clark says reduces heat buildup, and we found that to be true. At nearly an inch thick and made of slow recovery memory foam, the oval-shaped seals also help absorb some of the pressure around the ear. While we didn’t fly with them in a hot cabin, we suspect they’ll perform well when heads get sweaty, without having to modify the ear seals with fabric covers as many pilots do.

On the topic of controlling sweat, the One-X uses what’s called an Outlast fabric headpad. This is a breathable and vented pad that actually stores heat buildup and helps to eliminate hot spots. It also helps during cold conditions, releasing the stored heat onto the head for a warming affect. You can easily remove the pad for washing, too.

Last, the One-X follows the lead of the Pro-X and collapses for compact storage in the supplied soft carry bag.

The ANR circuitry on David Clark’s One-X is the so-called hybrid electronic noise-cancelling system. Hybrid ENC isn’t new and the company uses it on its Pro-X model.

Hybrid ENC circuitry samples noise with two microphones. One microphone is positioned on the exterior of the headphone dome, which isolates the microphone from the internal speaker. This is called the feed-forward portion of the circuit, while a second microphone is placed inside the dome adjacent to the speaker, as the feed-back portion of the circuit. Both the external and internal microphones send the sampled noise signals into a noise cancellation processor, which contains two inversion circuits, creating an anti-noise signal. The signal is then amplified and passed along to the speaker inside of the earcup.

We listened closely for the noise-cancelling rumbling sound that’s inherent with some ANR headsets, but we couldn’t hear any with the One-X. Of course, that rumble often shows its ugly head when the headset is worn in the cabin of piston twins, but we only used the One-X in a piston single for this review.

Since the One-X has such tight ear seals, passive performance was quite good in the cabin of a Cirrus. But with a 50-hour battery endurance (the set uses two AA batteries), you might never have to try them without the ENC circuitry. The set is available in a version with a six-pin LEMO power plug for using ship’s power. This will require additional wiring and the installation of a panel interface connector, of course.

We found the audio quality, which is driven by DSP (digital signal processing), to be quite good and the headset should be a good match with nearly all of the modern audio panels on the market.

For microphone audio, the set uses an M-55 electret mic attached to a reversible (you can place the mic on either side of the headset) and fully flexible boom assembly. The microphone performance was accurate and we never experienced clipping, as long as it’s positioned on the lips.

As everyone should expect, the One-X is equipped with wireless Bluetooth, which is commanded with a dedicated Bluetooth button on the control module. Initial pairing to an Apple smartphone was as easy as it gets. Press and hold the Bluetooth button for two seconds and the button flashes a purple annunciator, triggering an audible tone. Press the Bluetooth button again and you’ll see the DC One-X in your wireless device’s menu.

The wireless entertainment input audio quality is excellent, in our opinion, although we hoped for a touch more gain. Still, with the smartphone volume and headset volume cranked to the max, the music audio never distorted. Audiophiles should be content.

Adjusting headset volume is an easy affair, thanks to a simple and nicely designed control module that seems the perfect size. It isn’t littered with complicated and misplaced controls. Independent volume controls for the left and right earcup are linear, while pressing and holding the power button turns the set on and off. When the batteries are going flat, the power key serves as a warning and flashes red.

We wish the One-X had a stereo/mono selector switch located someplace on the exterior of the control module, but it’s buried on the inside, below the batteries. The inside of the module also houses a selector switch for automatic shutoff after five minutes whenever the headset is disconnected from the audio panel (or the panel is turned off) and when you aren’t on a telephone call via the Bluetooth connection.

During a cellphone connection, there is plenty of sidetone (the sound of your own voice in the headphones), while answering and terminating an incoming call is accomplished by pressing the Bluetooth button on the control module. It’s worth noting that cellphone audio isn’t muted when receiving a radio call or when someone speaks on the intercom. If you want more advanced telephone functionality, you’ll need a full-featured audio panel.

The One-X does, however, have a control for muting Bluetooth music. When the music is playing, press the Bluetooth button until it flashes blue, which mutes the music during a radio call or when there is intercom chatter. Press the button again and a purple flashing annunciator with a two-chime audible tone advises that the muting function is off. The default setting at power-up is always mute on.

The DC One-X has a list price of $895—a price point we consider to be moderate among high-end ANR models. David Clark offers a 30-day money-back guarantee and a five-year limited warranty. The company always had a fair and accommodating repair policy—even when its products are out of warranty. This in itself could entice buyers to jump on the One-X over the competition.

If comfort and price savings is your objective, we favor the supra-aural Pro-X, but you’ll pay the price of slightly reduced ANR performance. David Clark sells through an extensive dealer network and directly on its website.