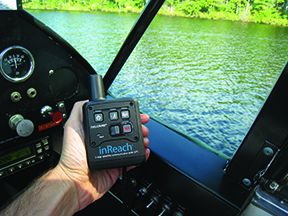 The aviation niche for a device like the inReach personal messengers makes sense if you know its roots. Outdoor types operating far off the civilized grid have always had the vulnerability of no method for getting messages out to friends, family or rescue personnel. Trackers fixed this by combining GPS position with satellite communication; now the hiker’s position is known and can be sent along with text.

Floatplane and bush pilots are in the same remote situations, so a tracker has appeal there, too. But tracking is only part of the appeal. If you pair a smartphone with a tracker, you essentially give the messenger a screen and keyboard and it becomes a backwoods communicator. This is exactly what the DeLorme inReach paired with their Earthmate app offers (iOS or Android).

Now these devices have a wider appeal for real communication as well as a backup emergency beacon for those flying to remote locations or too high and fast to use the cell phone.

The Basics
InReach works with or without the paired app. To start sending tracking messages using only the inReach, hold down the tracking button. Do the same to stop tracking. Tracking messages are position, altitude and speed reports sent at a user-selectable interval from two minutes to four hours. The more messages sent, the faster the batteries run down, but an airplane in flight can move pretty far in two minutes.

There’s also a dedicated SOS button with a lock to prevent accidental use. This sends a message for emergency assistance with your location to a service that will try and contact you or a designee. If they can’t get through and confirm a false alarm, SAR is notified and given your location.

InReach gets points for keeping your charging options open. The portable unit will take AA alkaline, lithium or NiMH cells. Just remember to reset the low-power warning for the kind of cell installed. There’s an optional 12-24 volt charger for $79.95 that replaces the battery holder for extended use in, say, an airplane. There’s also a $19 RAM mount.

And if you drop it while beaching your seaplane, it floats. It’s also waterproof to three meters.

App and Website
Bluetooth pairs the inReach with your iPhone and the capability curve goes way up. A text messenger function within the Earthmate app lets you send any text you want to smartphones or an email address. When that person replies, it comes back to your iPhone via the inReach just like a normal text message.

In our December 2010 head-to-head between two messengers on the market at the time, Spot Messenger and Spidertracks, we found the Iridium-using Spidertracks much more reliable in sending tracking messages compared to Spot’s system. InReach also uses Iridium. We had zero problems getting tracking or text messages to the satellites or back. In fact, the latency for text messaging via the satellites didn’t feel any different than on many cellular networks—better in some cases.

The Earthmate App can also control the inReach remotely, changing tracking intervals, sending canned or SOS messages, and reviewing the unit’s tracking and GPS status. If the app is paired during tracking, the tracks are shown on maps within the app. DeLorme’s first business is map making, so these are high-quality maps similar to seven-and-a-half-minute topos. DeLorme is considering offering more map options, including aviation maps. The app also offers a live map page with your current position using the messenger’s highly reliable GPS.

The complete tracking and text-message history is accessible from a Website for inReach owners, as well as others granted access. So you can send a message sharing your position with anyone, including a link that shows them on a map exactly where you are as well as track your progress. It also can link directly to Facebook and Twitter. If your inReach is on and you’ve given them permission, they can locate you and initiate a text conversation.

Middle-Ground Pricing
The inReach hardware is $250, plus $19.95 to activate it and one of several yearly subscription plans. The $9.95/month plan is just for 10 messages and no tracking, so it’s really just for the occasional user. The $24.95/month and $49.95/month plans differ only in a limit of 40 and 120 messages per month respectively. Both plans are also available in a seasonal-only package for $15/month extra if you only want tracking for a few months each year.

These prices are U.S. only. Canadian users pay a bit more and get a bit less. All North American plans include the SOS feature.

DeLorme’s inReach isn’t for everyone, however, we think it offers a good value for those who need reliable messaging anywhere in the world. It’s also an affordable option for those who need two-minute tracking, such as competition glider pilots, as it’s significantly cheaper than Spidertracks and much more portable.