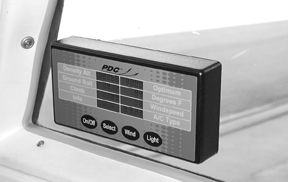 Worrying about how density altitude saps aircraft performance is a little like your mother reminding you to take your galoshes to school. Most of the time, it didnt matter but when you needed the boots, you really needed them.

Our guess is that most flat lander pilots dont have to worry much about density altitude computations, either. Even in the heat and humidity of high summer, most of us operate off long enough runways or at light enough weights for denalt not to be a serious issue.

At higher weights or at mountain airports, the sanguine attitude wont wash. Every year, there are a handful of wrecks in which pilots ignore the effect of density altitude and assume the airplane will behave as if at sea level. It wont.

A new product that purports to help in density altitude decision making is called the PDC-100, a self-contained computer and air density device a bit larger than a pack of cigarettes and intended to be plastered to a side panel or window via suction cups on the back.

The company that makes the PDC-100-PDC Technologies-has been promoting it hard with advertising and show presence so we borrowed one to try out.

POH Data
What the PDC-100 does, quite simply, is to store performance data from your pilots operating handbook, figure out the temperature and pressure, then use that to calculate a density altitude value and subsequent ground roll for takeoff.

Although the manual doesnt say it in so many words, the PDC-100 has onboard pressure and temperature sensors, from which it instantly calculates density altitude. To calculate takeoff ground roll, you need to provide one data point it cant sense: windspeed.

It weighs six ounces, with 9-volt battery, and has a highly legible LCD display. Its night lighting is a soothing red backlight, which is equally legible. There are but four operating keys: An on/off switch, aircraft selection, wind setting and backlighting. All are touch keys, with reiteration, thus theres a positive feedback when keying. Delivered from the factory, the PDC-100 comes loaded with POH data from 10 aircraft, including such common models as Cessna 172s and 182s, Piper Cherokees (two models) and a Malibu, but curiously no Bonanzas.

Jabbing the select key scrolls through the possibilities, each of which is described with an aircraft code explained in the manual.Obviously, to be of much use, the PDC-100 has to have data from your POH and youll have to put it there yourself, using a serial hook-up cable that lets the denalt computer talk to a PC for data transfer.

Garbage In, Garbage Out
To accurately compute takeoff roll, the PDC-100 relies on the owner to key in a matrix of data points and the instruction booklet provides a blank form for this task. We used an F33 Bonanza as our test case.

The blank form requires a total of 132 datapoints, 66 for ground roll computations and 66 for best rate-of-climb at various temperatures and altitudes. Its a tedious chore picking this stuff out of the manual, but thankfully, you only have to do it once.

To load it into the PDC-100, you connect a serial cable from the PC and the two talk through the Hyperlink utility. The denalt computer has all the necessary software and the instructions for linking the two devices are quite lucid, including some troubleshooting tips. With nothing but a minor comm port tweak, we easily got the PDC-100 talking to a laptop computer and, following the instructions, keyed in the required data from our scratch table. Altogether, allowing for extracting the data from the POH and getting computer set-up, we spent about an hour and a half.

The acid test: Does the thing work? Yes and quite accurately, with the exception that to save time, we played fast and loose with extracting the data from the flight manual.

Since the PDC-100 measures temperature and pressure on its own, we keyed in a nominal 10-knot headwind and read the results: 1072 feet of ground roll. Referring to the POH chart, we note a value just a bit higher than 1000 feet. Thats close enough, given the limits of our presbyopic eyes to pick out flyspeck detail on the performance graph.

On most takeoffs, a couple of hundred feet either way wont be determinative. For some environmental testing, we set the oven up to a low and warmed the unit. After five minutes, the temperature window showed 101 degrees and ground roll increased to 1455 feet, a value consistent with the POH.

Chilling the PDC-100 to a temperature of 55 degrees lowered the ground value read out predictably. (If conditions result in the ground roll doubling or the calculated rate of climb falling by half, the unit displays caution in its information window, a friendly reminder that youll need a long runway and no rising terrain ahead.)

Which brings to mind some limitations of this device. Because it has no external probe, the PDC-100s sensed temperature is inside the cockpit, which could be considerably higher than the ambient, if the airplane has been heat soaked on a hot summer day. This is not an insignificant consideration, since we found that the unit takes quite some time to cool to ambient temperature.

Similarly, if you were idling on the ramp with the air conditioning on high, the PDC-100 would give a lower-than-actual ground roll value. (This seems blatantly obvious but is worth mentioning, nonetheless.) Also, the PDC-100 doesnt account for variations in aircraft weight, which can affect takeoff ground roll every bit as much as density altitude can. The shortcut around this, as we see it, is to store two versions of the same aircraft in the PDC-100, one at gross weight and one at a lighter mid-weight.

Similarly, you could cobble up a way to store engine-out climb data for a twin, which would be nice to know when operating out of high-altitude airports. (Then again, maybe its better not to know.)

Conclusion
Rare indeed is the pilot who uses an E6B or the aircraft performance table to calculate ground roll before takeoff. Theres a reason for this and it isnt necessarily complacency. Its practicality.

If youre departing at gross weight from a 5000-foot runway on a hot summer day with a field elevation of 1000 feet, you probably have an innate feel for how the airplane will perform. If you expect a ground roll of 1100 feet and you actually use 1300 feet and the climb rate is 100 feet less than expected, so what? The margins are generous enough to cover the shortfall.

Takeoffs can get more dicey, however, when the runway is short or constricted with trees or other obstacles. Worse yet is higher field elevation, which chronically gets flatlander pilots into trouble at western airports that dont seem all that high.

Yet on a hot day, density altitudes in the 8000 to 10,000-foot range arent uncommon out west and can easily double the sea-level takeoff distance requirements. If you dispense with the critical ground leaning before takeoff, the ground run will prove sporting on a 4000-foot runway; disastrous on anything shorter. All the PDC-100 does is to lend easily available hard data to the takeoff decision, saving you the trouble of picking it out of the POH, if indeed you would even bother.

Is the convenience worth $325? For everyday near sea-level operations, we doubt it. Density altitude considerations simply dont play a critical role often enough to justify the expenditure, in our view. However, the device may be worth considering if you operate frequently from high-elevation airports at high weights or when takeoff performance is otherwise marginal. The PDC-100 does what it claims to do and is easy and convenient to use.

Frankly, we think the device should perform more functions and PDC says new models are planned to include TAS, fuel calculations, weight and balance and other such chores.