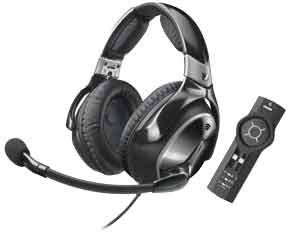 Leave it to German engineers to create solutions that add a layer of complexity. Case in point are new digital-process ANR headsets from audiophile manufacturers Sennheiser and Beyerdynamic, the S1 and the HS-800, respectively.

Whether the bottom-line experience for the wearer is better or just different than top-notch analog headsets like the Bose A20 or Lightspeed Zulu is arguable. But in both cases the digital experience is impressive. They also comes bundled with a wealth of features that earn it elbowroom in the top tier.

Digital ANR: Do We Care?
All ANR headsets, digital or not, sample the current noise signature in the environment to produce a matched “anti-noise” in the headset earcups. Like the new Bose A20, the S1 and the HS-800 have sensor mics inside and outside the earcups.

Most ANR systems selectively reduce certain frequencies more than others based on a factory preset. The theoretical advantage of digital ANR is that these headsets can alter how aggressively different frequencies are cut down—they can stray from that factory preset—in response to changes in cabin noise. The noise in your cockpit at takeoff power isn’t just louder than at cruise; it’s actually a different pattern of peaks and valleys.

The Beyerdynamic system continuously resamples the cockpit and corrects. The plus here is simplicity. Turn the ANR on and the headset does the rest. The downside is rapidly changing noise can confuse the system.

For example, the HS 800 is quite sensitive to wind inside the cockpit, such as an open window on the ground, and creates a thrumming sound in the earcups. We felt the HS 800 worked well in flight, and we wouldn’t have noticed the adjustments had we not been listening intently. How quiet are they? Comparable to the older Bose X headsets, which is to say quite comfortably quiet.

The Sennheiser engages the factory preset for ANR when you first turn it on. It stays that way until you press the Smart Update button on the side of the left earcup. This makes the headset sample the current noise and adjust within four seconds.

The effect of a Smart Update on the S1 is noticeable, if a bit subtle at times. We tried it in both normal flight, where we resampled once for climb and again for cruise, and during touch-and-goes. The effect is most pronounced when you resample to engine idle on the runway and then resample again during climb. Even without Smart Update, the S1 gives impressive noise reduction. With it, the S1 is as quiet as any headset we’ve tried.

Passive noise reduction (what happens when your ANR batteries expire) is acceptable on the HS 800, but is outstanding on the S1. The S1 bests the Bose A20 and, possibly, the Lightspeed Zulu on this count.

That passive reduction comes at a cost. The S1 is big and a bit heavy at 14.5 ounces. The Zulu is 13.9 and the Bose A20 only 12. The HS 800 is a svelte 11.9 ounces. We like to test this both in flight and by wearing the headset all day in the office while listening to music and making phone calls. The S1 isn’t too heavy for all day, but the difference is noticeable after several hours.

HS 800: Simple, Comfy
The first thing you notice about the Beyerdynamic HS 800 is it looks like a high-end headset for your home stereo, rather than your airplane. Construction is almost entirely steel and carbon fiber. The HS 800 is lightweight with a snug, yet comfortable fit. Big, round earcups swallow your ears.

The controller box has a plug that does double duty for phone or music and the wide variety of cables to make that work are included. All cell phone and music control is via the remote device rather than the headset. Our gold standard for music fidelity in an aviation headset is a wired connection to the latest Lightspeed Zulu. If the HS 800 isn’t its equal, it’s at least close. The HS 800 has a controller button to turn auto-muting on or off at will. There’s no Bluetooth in the HS-800, however.

The HS 800 feels solidly made and is warranted for five years. You have the option of creating a custom color scheme if you order directly from Beyerdynamics (the Manufaktur section of their website). If your flying companion can be made happy by walnut-colored earcups with purple trim, this could be the headset for you.

Head-to-head with the S1, we’d have to say Sennheiser’s headset is quieter. We think the HS 800 is also bested by the Bose A20 and the Lightspeed Zulu in this regard. But this is splitting hairs. The HS 800 is plenty quiet for all-day use. It’s surprisingly good at passive noise reduction when turned off, given its size, but you wouldn’t want to fly that way for long.

The HS 800 goes downhill in comfort when wearing glasses, particularly thick sunglasses. The ANR is fine as the earseals are quite malleable, but the clamping on the glasses becomes noticeably uncomfortable after several hours.

Battery life is pegged at 25 hours on alkalines.

We started hearing ANR “wobble” that went away with battery replacement after about 20 hours. Redel (lemo) plugs or a power adaptor is an extra $40.

The headset is priced at $840, midway between the highest headsets and the middle field such as the Lightspeed Sierra. The Sierra is more feature-packed, but we think the HS 800 is more comfortable (with thin sunglasses, anyway) and quieter.

S1: Features Beyond ANR
It’s not enough to just have good ANR these days, and it’s with add-on features that the S1 really shines. Bluetooth connectivity for both music and phone is standard. The unit can dual-pair, meaning it can play music from one device and then pause the music to place a call from the phone without unpairing and repairing.

For a compliant Bluetooth device, you can start, stop, fast forward or rewind the music, as well as adjust music volume, using buttons on the headset control—a slick trick if your MP3 player is stashed in a pocket. There’s also a standard phone button to answer, hang up or redial calls from a Bluetooth phone. Sound quality for playback was excellent, so long as there was a good charge on the batteries (auxiliary power is an option with the S1, but pricing is not yet set). Serious soundheads might notice Bluetooth fidelity is a bit limited, however.

The S1 is user configurable to an extreme. In addition to controlling automatic muting of music and mono/stereo intercom settings on the face of the control box, the S1 has dipswitchs inside for auto-off and treble boost. The former sets the ANR to automatically power off when the aircraft power is turned off (or the headset is unplugged). The latter lets you selectively boost treble in the earcups. This is where human voice sits, so it effectively boosts voice over other sounds. We boosted it in one earcup only as a test and it definitely made communications stand out for that ear.

The clamping pressure of the whole headset is adjustable to one of three pressure settings. The mic had excellent sensitivity as shipped, but its gain is user adjustable as well. One last place the S1 excelled was with eyeglasses. The earseals have a soft area to let eyeglass and sunglass temples slide through without unsealing the earcups as much. It works even with thicker sunglasses.

The dings we have with the S1 are minor. The buttons on the controller switch easily and are not guarded, so we accidently turned the ANR off once and hit the phone button (which paused the music and activated the cell phone) once when we grabbed the control box to adjust the volume. The battery light has no warning level: It tells you the batteries are fine or nearly dead. The company says 15 hours with alkaline batteries when Bluetooth is on. We saw less than eight before the Bluetooth music started crackling, although the ANR was still working. Without Bluetooth on, the claimed battery life is 25 hours.

Much of the construction is plastic, including moving joints, so only time will show how the S1 holds up to abuse. The warranty is five-years with a 30-day money-back guarantee. Sennheiser is playing Bose and Lightspeed’s game in price as well as features with a list price of $995.

Buying Decisions
If you want the quietest headset you can get … you’re going to have to try them all yourself and see what works best for your ears. From where we sit, the S1, once it has resampled the cockpit sound, cuts down cockpit noise more than any competitor. But the differences in top-end headsets are in quality of sound as much as quantity, and we still think the Bose A20 provides the greatest sense of all-encompassing quiet.

Sennheiser says the extra weight of the S1 is offset by greater comfort. We disagree and would peg the A20 as comfort king with the Zulu and the HS 800 in a tie for close second (although the Zulu handles sunglasses better). We’d put the S1’s more helmet-like feel as a definite fourth. It’s not uncomfortable. It’s just not as comfortable as the other three, in our opinion.

While the HS 800 leads the pack in price, we think the $60 delta to a Zulu, with more features and what we think is better comfort with sunglasses, is worth the investment. The Zulu also offers music and cell through wire or Bluetooth.

Is the extra $95 for the S1 (or $196 for the A20) is worth the money over a Zulu? The remote control of music from the headset is a great feature, although it’s not a big deal to control the music from the player if you have it in reach. (Yes, an iPad can send Bluetooth music to a headset while simultaneously using a Bluetooth GPS with Foreflight.) The extensive customization offered by the S1 is likewise compelling. If you have particular trouble hearing voices, the S1’s treble boost was made for you.

And if you feel ultimate quiet and user features are worth a bit more weight on your head, the S1 might be made for you, too.