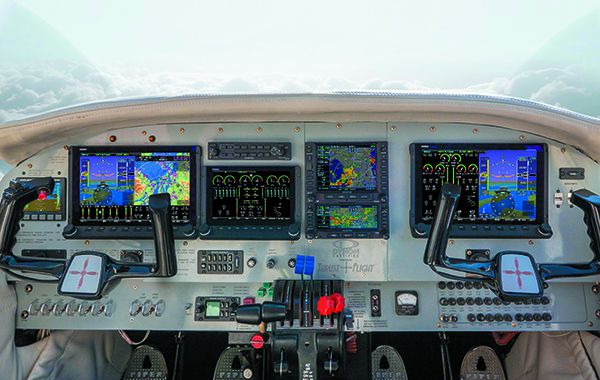 The STC list for Dynon’s HDX Certified avionics has been slowly growing and now includes the Piper PA-34 Seneca series twins. Other than the HDX’s expansion into twin applications, what’s significant is the autopilot that’s embedded within the HDX suite. Like other twins, the majority of aging Piper Senecas have aging autopilots—mainly Piper/Century systems that might need major repairs, or at least a boost in capability.

When we first reported on the Dynon HDX Certified system (see the installation/flight trial article in the July 2019 Aviation Consumer) the only STC was for the Cessna 172 series, but it was expanded to Beech Bonanzas and now Piper Senecas. The installation network has grown to just shy of 30 shops, making the HDX more accessible and supportable. The installation—after buying the $5000 STC—can be done by approved A&P mechanics who have current IA credentials. 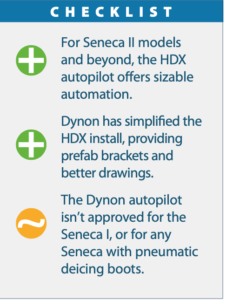 In its basic form, the HDX has a single 7-inch PFD touchscreen, a primary-use ADAHRS, magnetometer and backup battery. Dynon’s STC airplane—a Seneca II—has two (pilot and copilot) 10-inch displays and an EMS (engine monitoring system) that requires a dedicated 7-inch screen. This is Dynon’s first twin-engine EMS in a certified aircraft, and the interface has been streamlined to not only display in a split-screen mode on the PFD, but also combine parameters for both engines on one screen. In experimental aircraft like the Lockwood Aircam, the interface generally uses dedicated displays for each engine.

The HDX suite has an integrated GPS for VFR navigation, but for IFR capability you’ll need to install an IFR panel navigator. We like the flexible third-party compatibility, from Garmin’s legacy GNS WAAS units to the current GTN/GNX series. The STC airplane sported a pair of Avidyne IFD systems. Older navcomm receivers (a King KX155 is one) can play with an analog VOR/glideslope input to the displays. You can also add Dynon’s VHF smart-comm radio for a display-embedded radio interface, plus a panel control head. Dynon has its own ADS-B In and Out solution with a dual-band traffic and weather receiver and an ADS-B Mode S transponder.

Including the cost of the STC, a single-screen (10-inch) package with Dynon’s D10A backup EFIS, an avionics mounting shelf and a pre-made display harness is $14,189. The autopilot is $8460, ADS-B In and Out adds $3144 and the EMS with a 7-inch screen is an additional $7418. The configuration shown in the lead photo prices out at around $35,000, not including the panel GPS navigators and Avidyne audio panel.

There are some limitations, including non-approval of the autopilot in earlier Seneca models. Dynon told us that’s because the Seneca I’s airframe differs from Seneca II/III/IV/V models. However, it’s currently in the process of exploring an HDX interface with third-party autopilots. That’s good, as the Dynon autopilot isn’t approved on any PA-34 Seneca equipped with de-ice boots.

Looking ahead, Dynon’s Michael Schofield told us to expect more twin-engine STCs, including one for the Beech Baron, which at press time was in the final approval stages. The company is also working on HDX interfaces for Cessna 182 Skylanes, the A36-series Bonanza series and for some Mooneys.

Worth mentioning is that Garmin’s capable G3X Touch and GFC 500 autopilot aren’t approved for Piper Senecas and other twins (the TXi-series retrofit displays are), which could give Dynon a sales boost.