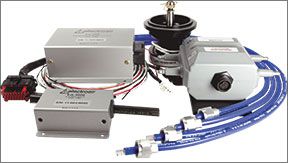 There have been a number of attempts to bring electronic ignition to the piston general aviation world—with varying rates of success. One we have been following is Electroair, a Howell, Michigan, company that developed an electronic ignition system (EIS) originally for homebuilts, and went on to get an STC for production airplanes—four-cylinder engine models first, then six-cylinder machines. It’s in the application process for turbocharged engines and may have that approval soon after this article appears.

Electroair has some 500 of its EIS in the field, and the owner feedback we got was uniformly positive (see sidebar).

Benefits
A magneto-based ignition system always fires the spark plugs at the same point—usually 25 degrees before top dead center—with the idea that the combustion event will reach maximum pressure by the time the piston reaches about 11 to 17 degrees past top dead center.

This one-size-fits-all system has worked well for years, especially at lower altitudes. However, as there is less oxygen for the fuel-air mixture at higher altitudes, the thinner mixture burns slower, delaying the development of maximum pressure in its combustion to a point past 17 degrees past TDC, reducing the power output. It’s long been known that advancing the spark at higher altitudes results in more power, as well as more complete combustion of the fuel. Electroair’s approach is to use a computer to sense altitude and various engine parameters to set the ignition timing so the spark generated a combustion event that provided the most power, most efficiently.

Electroair’s System
Electroair’s high-energy, tuned electronic ignition system was developed from a high-performance automotive system designed for racing. In service on aircraft, it replaces one of the magnetos.

While replacing both mags would be more sophisticated, FAA certification would require dual, independent electrical power sources—greatly adding to the cost. Plus, the marginal improvement in engine power and efficiency of two electronic ignition systems over one doesn’t appear to be worth the cost of the second system—in a nutshell, the fuel savings curve isn’t linear.

The system has four main components: a manifold pressure sensor, direct-fire coil pack, electronic control unit and a mag timing housing (four-cylinder engine) or timing ring that mounts on the crankshaft just behind the prop flange (six-cylinder engine). There is also a set of high-tension cable leads with terminals installed provided with the kit.

Timing is picked up by a “60 minus 2 tooth” trigger wheel with a single magnetic pickup; it provides a high-resolution signal feeding continuous RPM information to the control unit—similar to automotive units in the 1980s.

In four-cylinder applications a mag timing housing encloses the trigger wheel/mag pick up and replaces one of the magnetos. In a four-cylinder engine, the accessory gearing is such that a mag is spun one revolution for each revolution of the engine—in a six-cylinder engine, the gearing spins the mag 1.5 revolutions for each revolution of the engine. Accordingly, Electroair’s sixcurrent six-cylinder system still removes one magneto (and covers the opening) but uses a timing ring that mounts on the crankshaft as described above to get engine RPM and crank position.

Mike Kobylik, one of the two owners of Electroair, told us that on some six-cylinder engine installations there is already some component in the area where the timing ring needs to go, so the company is finishing up development of a mag timing housing for those engines.

The dual microprocessor electronic control unit receives RPM and manifold pressure information and advances the timing to compensate for altitude and throttle position based on proprietary and patented algorithms. Timing can be advanced as much as 20 degrees by the system.

The direct-fire coils produce a much stronger spark than do magnetos—on the order of 70,000 volts versus 15,000 volts. In addition, the spark produced lasts through 20 degrees of crank rotation versus five for a mag—creating a hotter, longer-lasting ignition source. This also improves starting and reduce spark plug fouling—which owners confirmed. Because of this, Electroair recommends installing the electronic ignition system on the bottom plugs, as they are more prone to fouling. With the more robust spark, the plug gap has to be increased.
Because the remaining mag still fires at 25 degrees before top dead center when the electronic ignition system has advanced the timing, the mag’s spark occurs with combustion already underway. Its spark is wasted. That’s no big deal, and it’s one reason why the system is referred to as a wasted spark system.

Cost
Price of the four-cylinder system is $3400; for the six-cylinder system it’s $5500. The list of aircraft for which the systems are approved is long, and includes both singles and twins. Kobylik did tell us that before an owner buys a kit, he or she should check with Electroair to see if the airplane involved has any design features that will make installation prohibitively expensive. Kobylik would not give us a generic installation time because he said there were simply too many variables, especially if the airplane has any mods. Owners told us to expect four to eight hours, however, our survey included a limited number of aircraft types.

The installation instructions we looked at were impressively complete and well-written. We noted that the coil pack mounts on the hot side of the firewall, while the manifold pressure sensor and electronic control unit mount on the cold side. Kobylik stressed that the owner and maintenance technician should sit down and go through the instructions step by step before beginning installation—because they are on the company website—before ordering a kit. Kobylik said the technician can identify potential areas of challenge based on knowledge of the specific airplane and call Electroair with questions. Owners and two maintenance shops that had installed the system said that the instructions are clear, but have to be followed exactly—and that when they called with questions, Electroair was immediately responsive. They also praised Electroair for fast shipment of parts.

Savings
Electroair forecasts fuel savings of one to two GPH—depending on engine size and altitudes regularly flown (higher is better). The savings are on top of what is obtained through normal leaning, whether rich or lean of peak EGT.

Assuming $600 for installation on top of a $5500 for a six-cylinder engine and a savings of $7.50 per hour in fuel (1.5 GPH at $5 per gallon), and conservatively not taking any savings for unneeded mag maintenance or plug cleaning, the system pays for itself in just over 800 hours. Assuming the engine runs to a 2000-hour TBO (and there’s no reason to replace the electronic ignition system at TBO—it keeps on going), the additional savings is about $8900, not counting unneeded mag maintenance.

According to Kobylik, installing one electronic ignition system gives about 85 percent of the improvement in fuel consumption and power that result if both mags are replaced with the Electroair system. The additional cost of a second system and an independent power source would mean that the payback for the increased efficiency might not be reached within engine TBO—so the company has not pursued FAA approval of a dual electronic ignition system.

The owners we spoke with who kept track of their airplane costs told us that they expected the system to pay for itself in 700 hours. That made it popular with the two flight school proprietors we interviewed, even though those airplanes usually operated at low altitudes—but their instructors taught their students to lean appropriately.

Power Increase
One flight school said it had converted one of its two Cessna 172s and the improved rate of climb from the electronic ignition system made it the more in-demand airplane for renters. We received limited hard data on power increase with the Electroair system—although what we got matched our expectation that the power increase would become more apparent as altitude increased.

One owner told us that the static RPM increase on his 172 at nearly sea level demonstrated an increase in four HP using traditional horsepower versus RPM change calculations.

Spencer Suderman installed the Electroair system on his Pitts S2B because he wanted to break the world’s record for number of turns in an inverted flat spin. With a dual mag system, the airplane would not climb above 21,000 feet. With one Electroair system installed, he was able to climb above 23,000 feet, a nearly 10 percent increase in maximum altitude. (He did break the record, making 81 turns.)

Conclusion
The automotive industry has demonstrated the value of electronic ignition—we’ve been waiting for it to be fully integrated into piston aircraft engines. While Electroair’s system is not as sophisticated as those in the current automotive world, it is, to us, a simple, elegant way to get a significant fuel consumption and performance benefits in an FAA-approved package at a price that has an attractive cost/benefit ratio.
Contact Electroair at www.electroair.net or 866-494-3002.