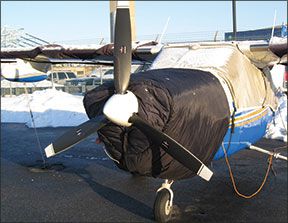 Unless you operate your aircraft in a warm climate, we think fixed engine heaters are essential accessories. Even if you store the aircraft in a heated hangar, there could be times when you’re faced with an engine-stressing cold start.

Not all systems are alike and the one you choose might depend on climate. We took advantage of a harsh New England winter and evaluated the performance of three systems.

Our evaluation included a system from Tanis, which uses cylinder heating probes, the popular E-Z Heat system, which heats the oil using adhesive oil sump thermo pads, and a Reiff system, which includes heated bands that wrap around the cylinder base.

Cold Soaked
In our estimation, engine heaters shouldn’t be judged solely on how warm they heat the engine. Instead, it’s how effective the system is at increasing the engine temperature above ambient and the amount of time it takes to do so.

The engines were cold soaked in temperatures ranging from 20-35 degrees F. We attached K-type temperature sensors to the base of a cylinder and to the top of the block. We also installed a dipstick temperature probe into the oil pan.

Each engine heater was turned on for eight hours overnight while onset HOBO dataloggers recorded the increase in temperature. We covered the engines with a blanket, installed cowl plugs and closed the cowl flaps. One engine—the Continental with sump heater—was parked in an unheated hangar and the others were parked outside.

E-Z heat
The E-Z Heat is the most basic system. It’s lightweight and includes a flexible heating pad, which adheres to the surface of the oil sump with RTV silicon. E-Z Heat claims that these pads provide heat to other parts of the engine, through convection and conduction.

E-Z Heat is thermostatically controlled for monitoring oil temperature. When the temperature reaches 110 degrees, the system shuts down to eliminate oil carbonization.

The McFarlane Aviation SAFE Heat pad—a product we didn’t test because we didn’t have access to an equipped aircraft, is thermostatically controlled to maintain oil sump temperature less than 160 degrees F. It sells for $198, or $323 with a temperature controller.

McFarlane makes a point that we once validated by placing a 100-watt light bulb inside the engine cowling. It can provide a similar radiant heating effect as a sump pad. That’s because when the oil and oil sump are warm, the air inside the engine rises and warms the upper engine, cylinders, crankcase and steel parts.

Tanis systems
The Tanis system uses heater elements that thread into cylinder CHT ports. The system also includes a single oil sump pad. System wattage varies, from 240 watts for four-cylinder engines, to 720 watts for larger six-cylinder engines. For engines equipped with engine monitors—which have probes that occupy the CHT ports—Tanis offers a kit with threaded heat elements for replacing one of the rocker cover bolts in each cylinder.

We evaluated the Tanis system on a Lycoming engine that had a JP Instruments engine monitor and the rocker bolt probes. The Tanis offered the most rapid heating of all the systems, raising the temperature nearly 40 degrees F above ambient in the first hour.

Engine manufacturers, including Continental Motors—don’t recommend leaving a preheat system on for more than 24 hours. If you are flying on a regular basis—which is once a week or more—Tanis says you can leave its system plugged in all the time because the heater elements keep the cylinder heads above the internal dewpoint of the engine. Controlling dewpoint, according to Tanis, eliminates condensation building at the top of the engine, a claim we couldn’t verify. On the other hand, we’re about saving energy whenever possible. Keep in mind that a Tanis system for a larger engine draws 500 watts. That’s enough draw to get the attention of your landlord.

On a side note, heater-induced condensation and eventual corrossion is an ugly side effect. Continental’s Bill Moss described such damage to the engine on a newer Cirrus. A proactive borescope inspection of its IO-550 revealed heavy corrosion, the result of the owner leaving the heater on for an entire winter.

Tanis Aircraft’s Doug Evink told us that his company’s system is intended to heat the entire engine, which he feels is in line with engine manufacturer recommendations. Further, Tanis does not sell or endorse systems that heat only the oil. As a result, all Tanis systems include an oil sump heating element, cylinder heating elements plus wiring harness and installation hardware.

Tanis also offers ancillary preheat products—including insulated blankets, to make preheating more efficient. Speaking of efficiency, we think any system will be more efficient if the cowling is covered.

Reiff Hotbands
Unlike the Tanis heated probes, the Reiff system heats each cylinder from the outside. The HotBands are stainless steel clamps with heating elements bonded to them. The bands install around the cylinder base, between the deck and the first cooling fin. The oil is heated with the thermostat-controlled HotStrip, which is included as part of the complete heating system.

Reiff offers a la carte selection of the HotStrip pad, the HotBands or both. The systems are available in three tiers, based on wattage.

Unlike Tanis, Reiff advocates owner installation of their products, although we’re not sure all owners will embrace the task—or possess the skill. It’s not difficult work, but it does require drilling a hole through the aft engine baffling and installing a grommet. The grommet feeds the plug-in assembly back into the non-pressurized side of the baffling. The HotBands are plugged into a supplied harness and secured with Adel clamps to the case bolts.

Reiff provides JB Weld epoxy to hold the metal heat pads in place. Like the other manufacturers pads, it requires a thoroughly prepped surface for proper bonding—which is easier said than done.

Compared to the Tanis, we saw a similar rise above ambient for cylinder temperature and like the Reiff bands won’t interfere with existing CHT probes.

Cold Ceanking
There’s plenty of theory but little proof about the damage done during cold starts—including main bearing and crankshaft damage—due to lack of lubrication. There’s also the potential for piston-to-cylinder clearance issues, resulting in metal-to-metal scoring of the piston and cylinder walls, when the pistons tend to warm more rapidly than the cylinders after engine start.

On the other hand, we think it’s unrealistic to preheat every time you start a cold engine, especially between seasons when there could be vast temperature swings. Still, our rule of thumb is to not start a piston engine without a preheat below 25 degrees F.

Both Continental and Lycoming have service letters on the subject. Continental’s SIL 03-1 says that preheating is required whenever the engine has been exposed to temperatures at or below 20 degrees F, for a period of two hours or more. They say this results in oil congealing within the engine, oil hoses and oil cooler, with subsequent loss of oil flow and subsequent engine failure. Lycoming’s service letter 1505 requires preheating below 20 degrees F for the 76-series engines.

Unless it’s colder than 20 degrees F, we’re convinced that an oil sump heater—when used with a cowl cover—sufficiently heats the oil, with the added benefit of radiant heat to the upper engine, cylinders, crankcase and other components.

But for colder temperatures, we think both Reiff band heaters and Tanis probes are more effective. Reiff bands offer an easy and cheaper installation while Tanis heats the engine quicker, but with a more complex and costly installation.