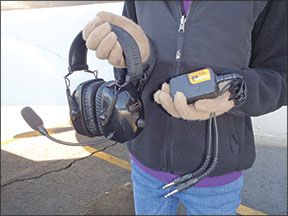 In a world that’s gone wireless-everything, it’s surprising that cockpit audio communication has lagged behind. That’s why the EQ-1 Link wireless ANR headset networkfrom EQ1 Wireless Communications is so intriguing.

Whether it’s dealing with audio jacks that are installed in inconvenient locations, passengers awkwardly tethered to audio stations, or the wear, tear and failure that’s common with the audio cords on wired headsets, it’s easy to see the appeal of a wireless aviation headset.

We tried the EQ-1 headset and the new EQ-Reverse Link system—an interface module that allows you to link traditional headsets into the wireless network—and found that while the concept isn’t a slam dunk, it can serve a purpose for some specialty missions and for passengers.

the hardware
The heart of the system is the EQ-Link module, a transmitter and receiver that links the headset to the aircraft audio system. EQ-Link doesn’t use Bluetooth for communicating, but instead operates on a frequency of 2.4 GHz in the ISM band. The company claims that using 2.4 GHz frequency-hopping provides for more reliable and clearer communications.

In the radio world, frequency-hopping is a proven method of transmitting signals by mixing or switching a carrier signal among different frequency channels. ISM (industrial, scientific and medical radio bands) comprises of the radio spectrum reserved for industrial uses of radio frequencies (walkie-talkies and microwave ovens, to name a couple). Like a walkie-talkie, the EQ-1 headset has a range of roughly 30 feet. That’s plenty for most GA cabins.

While it’s compact, the EQ-Link wireless module isn’t entirely wireless because it plugs into standard microphone and headphone jacks, using audio cables that extend 12 inches from the module.

We wonder when a true wireless audio interface will evolve, eliminating audio jacks entirely. This is the pricey part of audio system installations that usually require removing the interior to route the wires.

When the EQ-Link module is installed in the aircraft, it can be clipped to a map pocket or attached to a surface with Velcro. The headset and the module are powered by NiMh low-loss rechargeable batteries, providing up to 35 hours of in-flight use. NiMh battery technology is well-suited for this application because the batteries will only lose 1 percent of the stored charge per month when not in use. The EQ-Link and EQ-1 Headsets will turn off automatically when the aircraft power is off. The headset and the link module can be charged from a USB port, AC wall outlet or from the aircraft DC power receptacle.

The link module is simple to manage because it has minimal controls—including two mode status lamps, a status button and an audio input jack for entertainment and phone sources. There’s also an optional Bluetooth module, but even it’s not entirely wireless because it connects to the EQ-Link module with a patch cable, requiring yet another piece of hardware to manage. The interface would be much better, in our view, if the EQ-Link had a Bluetooth receiver built in. The EQ-Link user interface consists of a voice annunciation system that prompts the user through the various system settings, while the user interfaces with the system via a press-and-rotate multifunction knob, located on the left side of the headset. To turn the headset on, press and hold the knob for a couple of seconds, and a British female voice announces the hours of battery life remaining and whether the system is paired. Voice guides help navigate through the menu system. In our trials, we found the setup menu awkward and we don’t suggest passengers immerse any deeper than adjusting the volume.

performance
We evaluated the EQ-Link system in a Cirrus and in a Piper Arrow, both equipped with a Garmin GMA340 audio system. The EQ-Link system will accommodate multiple EQ-1 headsets paired to the same module, a configuration that’s intended only for passenger use. That’s because the RF link operates in a semi duplex mode and doesn’t have the ability to distinguish between pilot and passenger audio, creating a situation where passenger chatter will interrupt pilot audio.

We found the EQ-1 headset audio quality to be excellent and experienced no clipping of modulation thanks to the SOFTVOX feature. The system also has a personal intercom mode that generates sidetone (the sound of your voice in the ears as it’s transmitted to the link module). This can be useful when using the system in stark applications; perhaps in an aircraft without an audio system or when using a portable radio.

Since the system uses digital transmissions of audio data packets, there could be a slight delay of the sidetone audio stream from one end of the system to another, creating an annoying echo in the ear and something we experienced in the Arrow. To combat this, there’s an echo cancelling mode that bypasses the sidetone in the aircraft intercom system. Since voice modulation is digitized and compressed before it’s transmitted across the wireless interface, the sidetone quality has a digitally processed sound. Keying the aircraft push-to-talk switch creates a “beep” in the headset and a “BOP” when released. There’s also a yellow LED PTT indicator on the module.

limited application
We remember hanging inverted in the straps during akro in a CAP 10B while unsecured headset cords were nearly tangled in the control stick. The EQ-Link system solves that dilemma (it’s endorsed by Red Bull Air Race pilot Matt Hall). Need to bail out of an aircraft in a hurry, or wear a flight helmet? For these times, there are obvious advantages to wearing a wireless headset.

Still, we don’t see the point for everyday cockpit use. For many of us, once we’re plugged in, wired headsets are forget-it items. For passenger use, however, we think the system is useful. For the freedom to move around larger cabins or for simplifying the overall flying experience, the basic EQ-Link system delivers for the cost of a higher-end wired ANR model. It sells for $699 with one headset, link module and chargers.

While the $570 EQ-1 ANR headset performs well, it won’t win awards for comfort with its moderate clamping pressure. But the EQ-Reverse Link system—allowing plug-in of any aviation headset (it worked well with a Lightspeed Sierra model)—solves that dilemma. It sells for $699 and the Bluetooth module is $217.