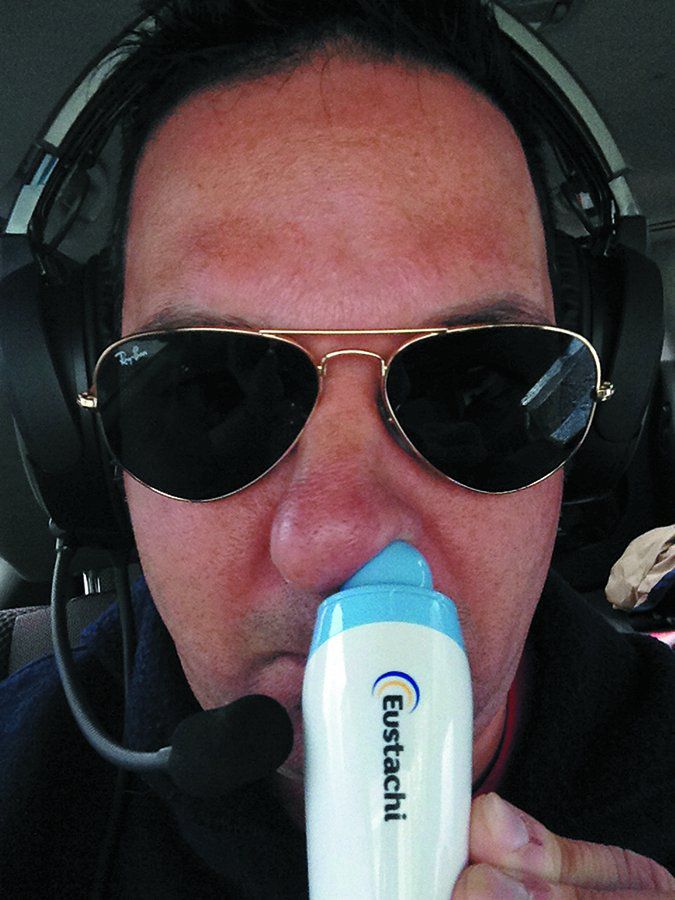 Adevice called the Eustachi is being marketed to pilots as an alternative to the Valsalva maneuver they’ve been using for years. You know the drill—pinch your nose and blow to unclog blocked ears during and after a descent. While that can generally do the trick, Minnesota-based Exercore says its Eustachi product is far more effective.

It claims that the battery-operated Eustachi is drug-free, natural, safe and can be used during any activity—including flying—when you would perform the Valsalva maneuver. But I had to ask: Do you really want to be pumping 5 PSI of air up your honker while at the controls? The pilot docs I talked with have similar concerns.

The human eustachian tube connects the middle ear to the nasopharynx. It is approximately 1.4 inches long and 0.12 inches in diameter. When nasal/sinus congestion occurs, this tube may get blocked and hence, you may not be able to equalize the pressure that accumulates. We all know that chewing on gum, drinking fluids and yawning might work at clearing the blockage. But if the blockage occurs before descending, the pressure may build to the point of rupturing the eardrum.

The Eustachi, which sells for roughly $60, is a handheld device that’s approximately the size of an electric razor. It has a battery-operated motor that runs a regulated air source that’s piped through a fitting, tightly fitting into the nostril. Press the button and the device outputs 5 PSI of airflow out of the hole in the nose fitting.

Since the eustachian tubes are located in the back of your throat (or nasopharynx), Exercore says the device helps to exercise the tubes by delivering air as close to the tube opening as possible, which is the nostril.

The company says injecting the regulated air isn’t enough. While the device is pumping, it says you should swallow, otherwise the air won’t reach the eustachian tube opening. It’s simple enough and I tried the device when safely on the ground, where it quickly unclogged my ears after a descent from altitude. But what are the potential risks?

I asked Dr. Robert Dodenhoff, our go-to AME, internist and an active pilot based in Hartford, Connecticut. Dodenhoff didn’t dismiss the potential effectiveness of the product, but couldn’t suggest using it—or not—without first seeing documented and approved clinical testing. Moreover, the device isn’t recognized in the American Journal of Medicine, so there is little if any reassuring evidence that exercising the eustachian tubes with forced air pressure can’t lead to complications. This includes barotrauma, ear infections and—worse for those at the controls—vertigo. I reached out to Exercore for comment, but they didn’t reply.

Dodenhoff noted that pilots who suffer from blocked ears may have eustachian tube dysfunction, perhaps complicated by allergies and infection. But as Dodenhoff and other docs I talked to warned, whether you create pressure on the nasopharynx using the air-driven Eustachi device or the old-fashioned Valsalva maneuver, beware of induced vertigo.