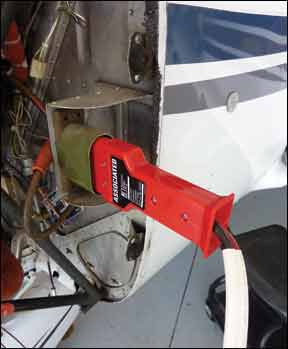 When gas was cheap(er), no one thought about doing avionics training on the ground. After all, how long does it take to learn to tune a radio and center a needle? Glass panels changed that. Now, even if you have a sim program, you still

have to seal the deal with some seat time in the airplane.

Thats best done on the ground, preferably with the engine off and thats where a ground power unit comes in. Not many owner hangars have these valuable gadgets, but a new offering from Audio Authority, the 2860A GPU, might provide a reason to buy one. With 60 amps of output, the Enhanced Flight GPU is the only small product of its kind to provide start assist capability.

This GPU is designed and constructed more or less like an audio rack component because thats where it comes from. The product is built by Audio Authority, which actually specializes in audio display components for retail stores but whose owner, Jonathan Sisk, has been active in developing STCs for the Piper Mirage.

necessary. Its equipped with a long cable which, conveniently, can unplug from the unit itself, making it easier to carry and stow. Two robust marine-type plastic cleats serve as cable stows on either side of the GPU. The front panel is equipped with a digital volt and ammeter display and is overload protected. For flexibility, there are plastic feet on both the bottom and back of the GPU.

With its high output, this GPU is suitable for starting an aircraft with a low but not necessarily flat battery. The company says to serve as external power, the ships battery should show at least 22 volts. (The GPS is 28 volts only.)

Although the GPU will top up a battery, it has no cutoff or charging circuitry, so its not specifically a battery charger. If we have any wants, we would say its dual

voltage. Although we cant think of many (if any) glass airplanes still running 12-volt systems, having this is as an option is desireable, especially if the device is used by an FBO, a club or owner group with a mixed fleet. A dual cable option would also be a plus.

At $1095 complete, the GPU is a good value against the popular Red Baron APU at $675. Although the Red Baron is dual voltage and can be equipped with dual cabling for the Piper-type plug, it lacks start assist capability which, sooner later, everyone seems to need.