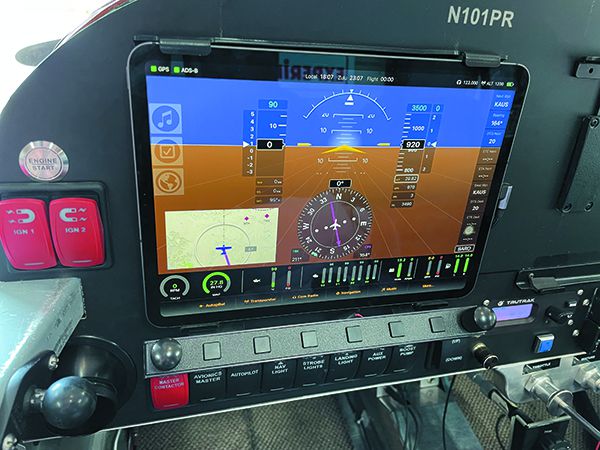 No, Apple’s iPad isn’t going to put Dynon or Garmin out of business—ever. But it will continue to rob sales of big-screen display suites because face it, the current big-screen iPads look pretty darned good. But while the troops are pretty, iPads can’t fight the heat that ultimately shuts them down in a hot cockpit, making them useless primary instruments for IFR flying. Plus, mounting them on the panel like you would a Dynon or Garmin can be crude at best, and we’ve seen some ugly and unsafe attempts at securing them. From the experimental world comes Falken Avionics, attempting to tame that dragon with two eye-catching iPad mounting solutions, including the FlightDock. You’ve heard of these guys, originally called Open Flight Solutions, founded by Steven Sokol and launched in 2016 with a Kickstarter campaign to fund the FlightBox quick-build kit for the Stratux open-source ADS-B receiver. It was a huge success.

At AirVenture last summer it was showing the FlightDock iPad panel-mounting system. Other than getting the iPad up on the panel, the idea behind the FlightDock is to also make the tablet easy to install and remove, while a built-in active cooling system works to keep the iPad from overheating. Unlike the Guardian Avionics SmartDeck, which uses hardware to mount the iPad in the panel, the FlightDock contains the iPad on the outside. This makes for an easier installation, while avoiding major panel modifications that can become obsolete as the iPad line changes size over time. The current product works with all full-sized iPads except the iPad mini. 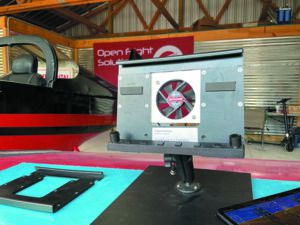 The FlightDock is simple and consists of the mount and the cooling system, which is a 70-mm computer cooling fan with a digital controller that directs a stream of air across the rear casing of the iPad. The mounting kit consists of upper and lower aluminum mounting rails, a couple of plastic guide blocks, foam pads and securing hardware. The lower rail is fixed, while the upper rail slides up and down in the guide blocks, allowing the iPad to be installed and removed. The foam pads adhere to the panel and push the iPad forward against the tabs on the upper rail, helping hold it in place. That’s a photo of the hardware with cooling fan attached in the lower left.

The cooling fan system uses a solid-state thermometer to measure the temperature of the air behind the panel and automatically adjusts the airflow rate as it warms. During the installation, the fan is typically placed where it’s centered vertically and horizontally behind the iPad, and on the backside of the instrument panel, blowing through a 3 1/8-inch instrument cutout. It requires ship’s power that’s wired into a four-pin connector directly off the fan, and only works with a 14-volt input.

An interesting accessory is the Falken FlightBar (the white arrow in the center photo points at it), which mounts to the lower rail of the FlightDock. This is a tactile wireless controller for interacting with the company’s FlightView EFIS (and engine monitoring system), which runs on the iPad. The only downside we see is that the FlightBar’s commands won’t work with third-party apps. But for VFR ops, the FlightView (for iOS version 13.0 or later) is capable, and it can be highly configurable as a full-screen EFIS with engine and weather data overlay, plus it interacts with some autopilots. We’ll look at the app in a separate article in an upcoming issue of Aviation Consumer.

Since the FlightDock and FlightBar hardware come from the experimental world, you’ll need additional approvals to install them in certified aircraft. Falken’s Steven Sokol told me the company is working to eventually earn approval through the FAA’s NORSEE (Non Required Safety Enhancing Equipment) process so they can be installed as a minor alteration. Still, it’s up to the installer to determine the method of signoff. The FlightDock/FlightBar bundle is $350, and $200 each when purchased separetly.